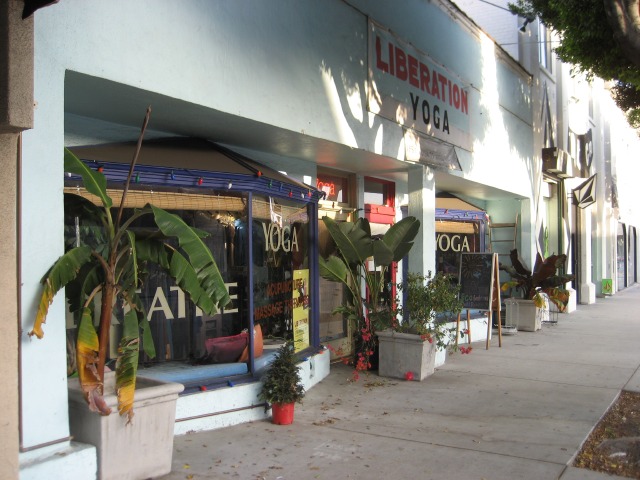 With as many gurus of yoga available as the personality types frequenting their classes, finding a studio and a style as a beginner can be daunting. But one need look no further than the local newsstand and their dizzying array of yoga journals to see that the health (and other) benefits of the practice run far and wide.

Originally envisioned as a way to physically prepare the body for long bouts of meditation, yoga as us Westerners understand it is really just postures (asana) and breathing (pranayama), two of eight limbs found in Patanjali’s Yoga Sutra, the eightfold path of yoga (Ashtanga). You can think of it as the exercise portion of a total life plan, and though the reasons for getting barefoot and sweaty may be to relax and de-stress from that long commute in rush hour traffic or simply a desire to obtain tight abs and an American Apparel ass (you know the ones I speak of), yogis often find their mental muscles also toning as a result of their time on the mat. 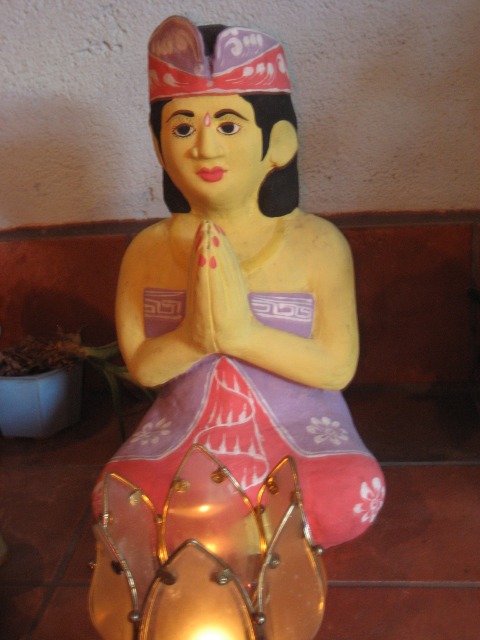 While many postures or even series of postures (vinyasa) may look the same across classes, there are distinct differences among teachings. A typical Iyengar practice holds certain poses for extended periods of time and relies heavily on props to go deeper and more accurately into each stretch whereas Bikram devotees find themselves in rooms heated upwards of 100°F to encourage toxin release. Anusara and Viniyoga both pride themselves on being flexible and creative in their teachings to meet the variable needs of each student, but in entirely different ways, as evidenced by the focus and flow of either class. Like most yoga followers, I tried all these with mixed emotions before settling on Ashtanga. Master Sri K. Pattabhi Jois pioneered this form of yoga, centered on synchronizing movement and breath to internally cleanse, in the 1930s. Made up of six series of fixed postures, each increasing in difficulty, it offered a workout that felt reminiscent of my years as a long distance runner, with an applicable home practice. When taken Mysore-style, the student goes at his or her own pace and level, while a trained instructor offers guidance through personal adjustments. Though every student learns the same asanas in the same order, how far one goes in each series is variable, with postures taught to students as the instructor feels they are mentally and physically prepared to do them.

Now, I know that it would be a very anti-yoga sentiment to say I’ve been a bad student as of late, but it’s true. Formerly a four time per week attendee, I hadn’t hit the mat in over a year. So, inspired by Workout Wednesdays, I recently dropped in on a class with my teacher Joel Bender at Liberation Yoga to reconnect body and mind. Here’s how it went: 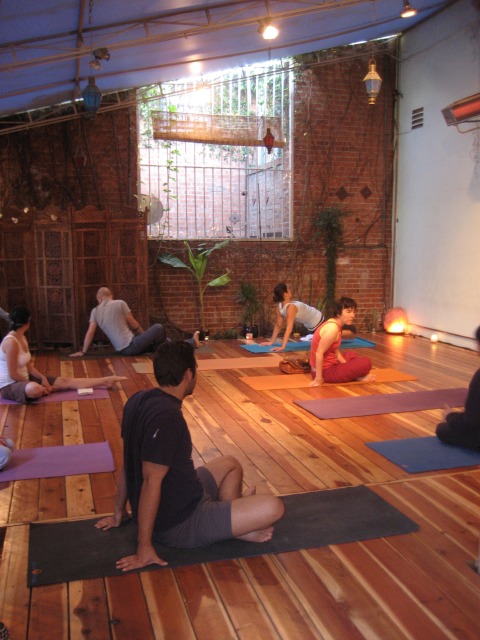 8:10 am: After snagging a terrific parking space in the back, I wander in sleepily past the lush outdoor studio to find out where we are practicing. I spot Joel in a modified lotus pose, laptop open and talking quietly into his cell phone. He’s surprised and pleased to see me, and raises his eyebrow as if to say, “Where have you been and more importantly, how is your practice?” Do I look as guilty as I feel? We hug and I head to the studio.

8:15 am: As I take the mat, I can hear the deep ujjayi breaths coming from the two students already there. (Mysore-style classes are generally offered in two-hour time slots, but you come at a time that will best suit your practice and leave when you are done. Led classes are structured and each student does the same posture at the same time.) There is a reason it’s called the “victorious breath”; the forceful rhythmic sounds fill the studio and instantly help quiet my busy mind. While standing in Tadasana (mountain pose) I say the traditional Sanskrit mantra to myself. I can’t believe I still remember it.

8:17 am: One Surya Namaskara A (sun salutation A) in, I’m sweating and my muscles are beginning to wonder what the hell I’m doing. My heels can’t touch the ground in Adho Muka Svanasana (downward facing dog) and I’m starting to regret coming. My ujjayi breath sounds less victorious and more like I have asthma.

8:35 am: Hooray! Five Surya Namaskara B’s behind me, the “warm up” is officially over. I’m drenched, but my calves and hamstrings aren’t screaming (as much) and my endorphins are starting to kick in. I’m ready for the standing postures.

8:37 am: Barely able to stand on my hands in Padahastasana (hand under foot posture) I decide I am clearly not ready for the standing postures. How did I get so inflexible? Was it the running three miles and not stretching? The cheap Ikea pillow I sleep on? As I transition into Utthita Trikonasana (extended triangle posture), I realize that I’m not linking breath with movement and all these worrisome thoughts are keeping me from enjoying the practice. Hmmm. Sounds an awful lot like the rest of my day.

9:00 am: As I vinyasa through to Utkatasana I find myself back in downward facing dog. Only this time, my heels are grazing the floor. I realize I’ve been lost in the practice for the last ten minutes and my body is starting to remember the poses like an old, slightly bitter friend. I smile at my progress.

9:30 am: At this point, most of the students have arrived and it’s time to do the mantra as a class. Joel leads in a deep and soothing voice and we follow. There is a strong connection between student and teacher in Ashtanga and for good reason. Each posture builds on the one before it, so a typical beginner relies on the instructor for correctly learning each pose; a first class may bring only the sun salutations and a few standing postures. As time and level of competency progresses, so do the poses. Having acquired all the postures of the first series, I realize I’m actually more patient then I thought.

9:45 am: I’m in the thick of the seated postures now so I pause before Marichyasana D to catch my breath. I realize I screwed up the order two postures ago and somehow Joel can tell I’m stressing. He comes over and sits down, gently prodding me into the next pose in the series (“Melissa! No yawning!”) while reminding me of what I’d missed. His careful adjustment pushes me deeper into the pose then I thought I could go without actually straining me beyond my limits. He’s lighthearted and kind, even as I babble on about why I’ve been absent and my renewed sense of yoga purpose. “Come when you can”, he smiles and moves on to someone in need of backbend help. 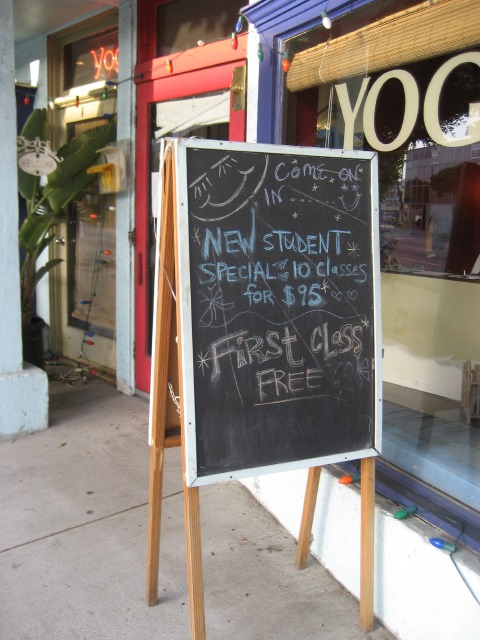 10:00 am: Finishing poses completed (I can’t believe I held that headstand!), I fall into the last (and arguably the best) posture in the series, Savasana (corpse pose). Joel does one last adjustment and in a deep exhale I revel in my practice. I feel lighter and calmed. Every muscle is wide awake and even though I know they’ll be vocal tomorrow, it’s OK. I’m totally glad I came.

Overall Workout: Self-directed. Liberation Yoga offers many different classes and styles. That said, most Level 2-3 Vinyasa Flow classes and Ashtanga (Mysore-style or led) are going to kick your ass.
Hobby-Developing Potential: High. That post-workout euphoria is really addictive.
Next-Day Pain: At least a 5/10, maybe more depending on how hard you pushed yourself.
Cost: You can buy inner peace! And it pays to buy in bulk. First class is free, $14 for a single class, $65 for a 5-class series, $120 for a 10-class series ($95 for new students), $150 for a 15-class series, $125 for monthly unlimited, $1,300 for annual unlimited. (Prices subject to change.)

All photos by Melissa Moore/LAist