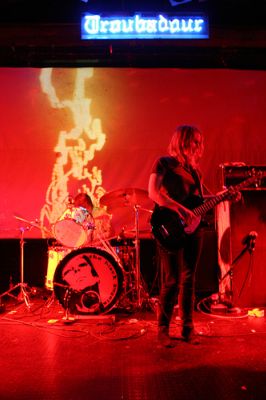 One year and four days after they played their first headlining gig at the Troubadour, Austin psychedelic rockers The Black Angels return to the West Hollywood beacon to music taste June 5 in support of their newest record: Directions to See a Ghost.

The Angels' first full length, Passover, enjoyed wide-spread acclaim and love on local radio. Their second album, due out later this year (but available now in digital format) builds on some of the same great Black Angelic traditions but carries their signature driving, forceful tones to a new level.

Songs like Dee-Ree-Shee and You on the Run, from Directions, make you feel like you are floating over the Grand Canyon on the wings of a 12-foot bird while the album's closer, Snake in the Grass, is a 16 minute, multi-part anthem to desert travel all without the aid of those messy hallucinogens.

That's all well and good, but the Austin quintet that is much a monument to 70's psychedelicness as acid, put on the sexiest show this side of Sunset. The raw power of Stephanie Bailey's drumming and the patient, building singing of Alex Maas draw you in while the explosion of bass with underlying hints of the sitar will spit you out.

Tickets are $14 and are available now.

Stream Directions to See a Ghost below:

Photo of The Black Angels at the Troubadour June, 1 2007 by JeremyRyan via Flickr.