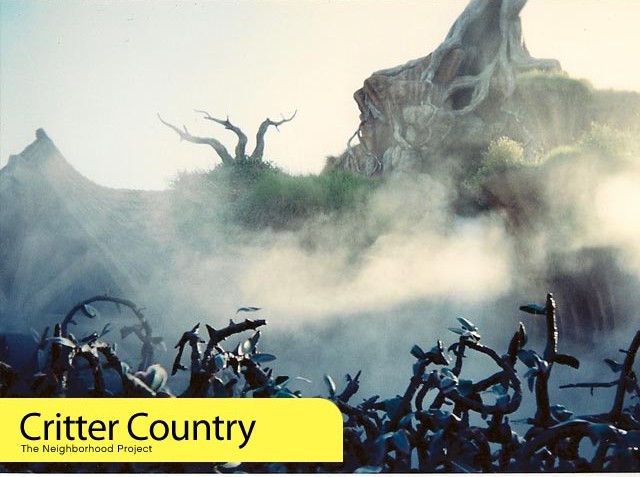 Critter Country is a breath of fresh county air in the hectic, fast-paced park life. Unfortunately, bucolic is sometimes mistaken for backwards. Many people consider Critter Country to be a "hillbilly" neighborhood inhabited by evil foxes and bears with droopy drawers. The boundaries between Frontierland and Critter Country are somewhat blurry, and Critter Country is often considered the red-headed step-child of Frontierland. The influx of a younger, hipper crowd in recent years from The Hundred Acre Wood has contributed to gentrification in the once-sleepy country berg.

In spite of its relaxing, tree-laden atmosphere, Critter Country does have a dark side. The malicious presence of Brer Fox and his dim-witted accomplice, Brer Bear, means tourists should take the same precautions as when visiting any unfamiliar area. Mind your purse and wallet, and keep an eye out for bear traps. The actual physical danger of Hephalumps and Woozles is unknown, but you are definitely in danger of having your mind blown. 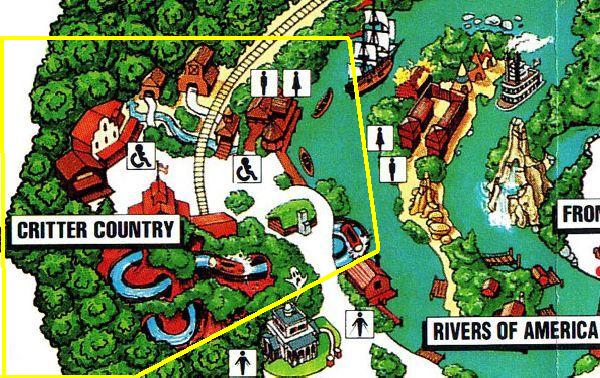 The Critter Country neighborhood borders the Haunted mansion to the South, and the Rivers of America to the East. To the North and West, beyond the forest, lies a black void that disappears into eternal nothingness.

People who front say they live in: Frontierland
Weather: Blustery 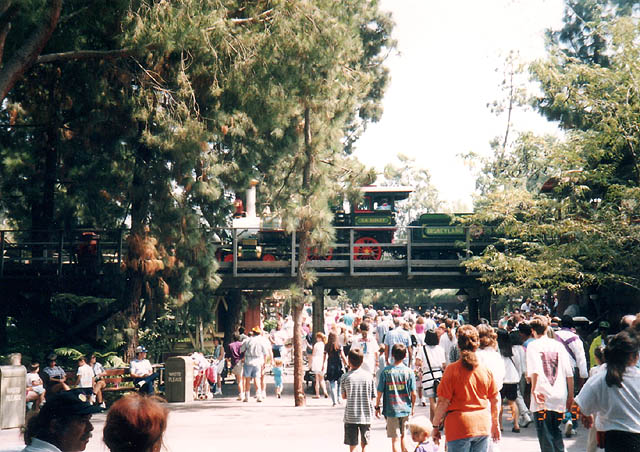 Transportation in this town primarily consists of canoes, logs, and hunnywagons. It often feels like you just ended up in the exact same place you started, so walking may be your best bet. The nearest train station is New Orleans Square. The train passes overhead, but does not stop in Critter Country. 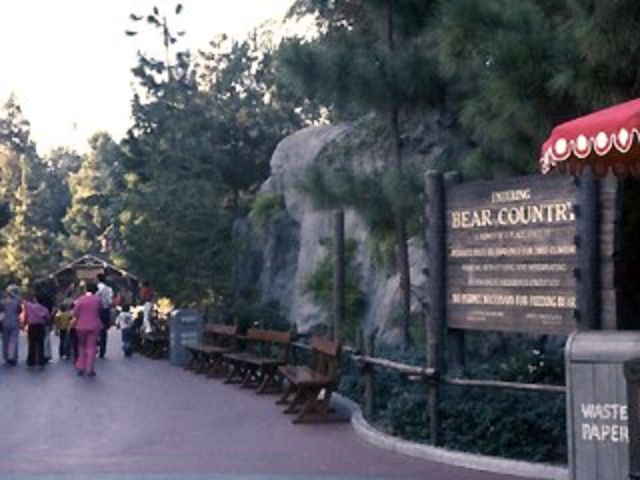 Bear Country opened in 1972, replacing the Indian Village. The landscape mirrors that of the Pacific Northwest. It was originally home to only three attractions, none of them exactly an "E" ticket, if you know what I mean. the Country Bear Jamboree, Davy Crockett’s Explorer Canoes (formerly the politically incorrect Indian War Canoes) and Teddi Barra’s Swingin’ Arcade. (www.yesterland.com) 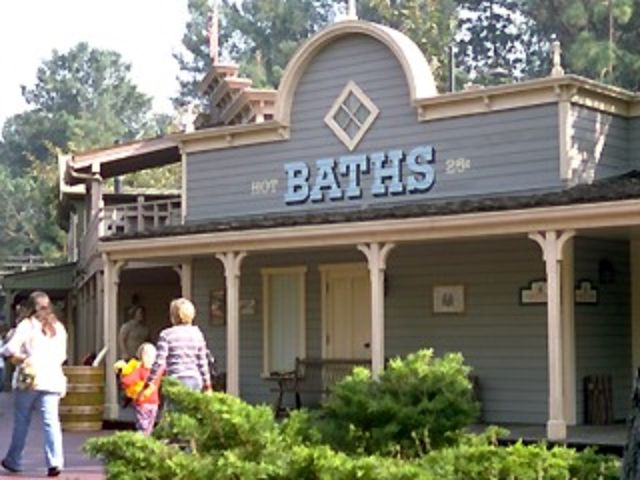 In 1988, Bear Country became Critter Country. The Bear Country “Baths” and the home of snoring Rufus the Bear (Who was often sleeping when he was supposed to be running the Jamboree's lighting and projection booth) were torn down and replaced with Splash Mountain [Other sources cite 1989 as the year of the name change. Splash Mountain opened in 1989].

Rufus the Bear moved into Splash Mountain for a couple of years. You could hear him snoring right before the first drop. Rufus was chased out by Brer Bear, who now lives in the cave.

In 1986, Disneyland’s Country Bear Jamboree “went to Yesterland.” A new vacation-themed show, the Country Bear Vacation Hoedown, replaced the original show. The attraction’s new name was Country Bear Playhouse. There was no sponsor.

It was a sad day when Country Bear Jamboree changed over to the Country Bear Playhouse. The cool old country classics like "Blood on the Saddle" were replaced by cheesy odes to Beach Boys songs, dressing Bunny, Bubbles and Beulah in humiliating bikinis. It was merciful when the show was finally put out of its misery.

Henry, the host of the show, discussed the low morale and increase in moonshine benders and drunken brawls on Behind the Music: Country Bear Jamboree, "I remember one night Zeke and Zed and Ted and Fred got it into their heads that the bear named Tennessee was looking at them funny, and before I could stop it, Zeke and Zed and Ted and Fred had beat the living shit out of the bear named Tennessee. Recently Miss Teddi Bara has been spotted on HBO's Grizzlies at the Point. Sad, really, that I never found a ladder. Maybe it wouldn't have come to this"

Many of the bears, now clean, have found work in Orlando and Tokyo. Henry has retired and is active in local politics. He has taken in Bunny, Bubbles and Beulah. He claims it is out of the kindness of his heart, but the arrangement raises a few eyebrows in Critter Country. 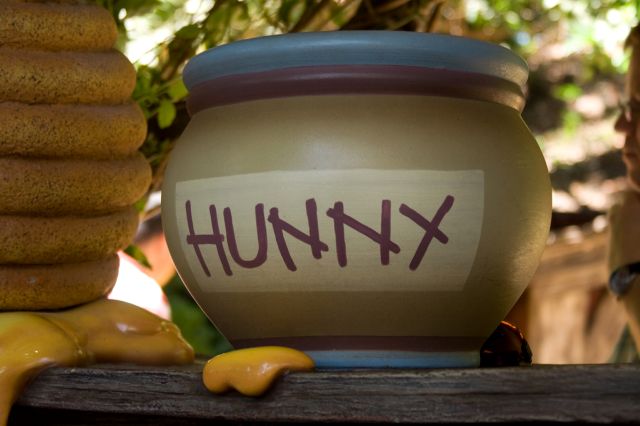 The Hungry Bear Restaurant, once known as The Golden Bear Lodge, sits next to the entrance for Winnie the Pooh. The food at The Hungry Bear (and the "Golden Bear Lodge" before it) sucks. Sorry, but it is a toss-up as to whether the food is worse here or in Tomorrowland. The upper deck does have a pleasant view of the river, so it's a nice place for parents to hide from their children and enjoy a cool iced tea while secretly hoping one of the canoes will tip over.

The little shack called Harbour Galley on the river used to serve catfish sandwiches and clam chowder. But good food in Critter Country has gone the way of Monsanto's Adventure thru Inner Space, and the shack now sells only McDonald's french fries and drinks. Really. The Brer Bar has been replaced by a gift shop.

Your best bet is to head over to nearby New Orleans Square for clam chowder (but for God's sake, stay away from the Mint Julep), or Bengal BBQ in Adventureland for bacon-wrapped asparagus. They have veggie options too, so veggies don't have to survive on pineapple spears and grape juice all day.

An ominous adventure that seems like good old-fashioned log ride fun on the surface, Splash Mountain is based on the Joel Chandler Harris fictional character Uncle Remus' stories about Brer Rabbit. Care has been taken to distance the attraction from the politically incorrect Song of the South. Diplomatic moves such as changing the "tar baby" to a "hunny baby" are transparent to all but newcomers to the region. The dramatic music at the end provides a "Passion of the Rabbit" mood, and I swear when I rode this ride in the early 90s, the voices sang, "oooh, ooh, the rabbit's gonna die..." 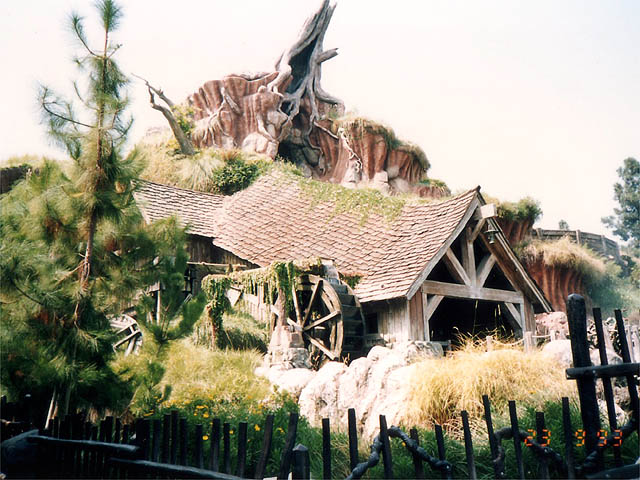 The Many Adventures of Winnie the Pooh 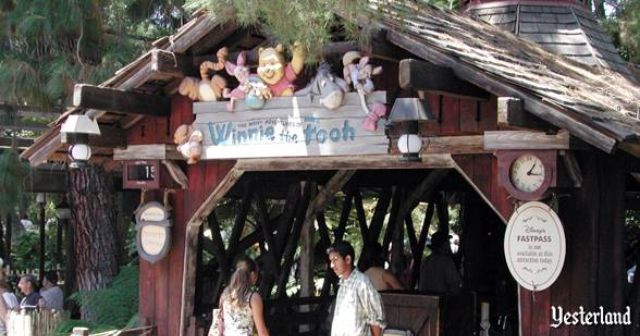 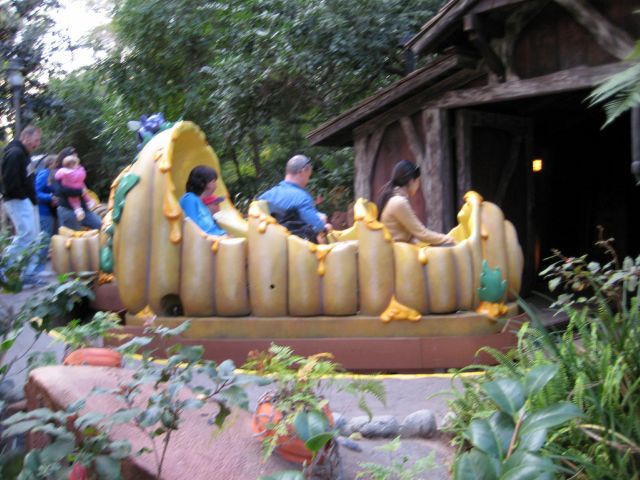 As the photographer says, this photo has two of the bear's favorite foods - honeycombs - and people! / Photo by woofiegrrl via Flickr

This attraction opened in 2003 on the former site of Country Bear Jamboree. if you keep an eye out, you may spot Jamboree hecklers (and ummm, wall trophies), Max, Buff, and Melvin along with the Hephalumps and Woozles. All I can say is, Do NOT take acid and get on this ride. 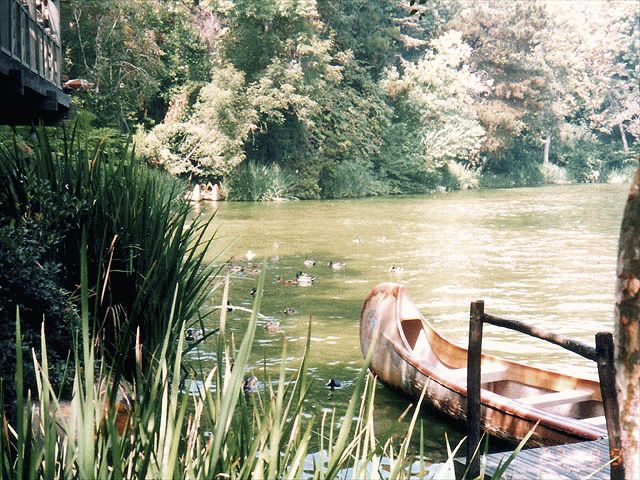 This year-round attraction closes at dusk. It is one of the only attractions that requires any participation. It is kind of quaint and old-fashioned. Plus, there are usually hunky guides in buckskin shirts. Oars up! 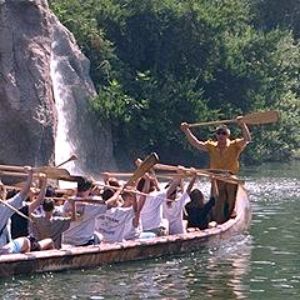 Davy Crockett’s Explorer Canoes operated on busier days only, primarily in the summer and on weekends. Even though Walt Disney World permanently closed their Explorer Canoes in 1994, Disneyland continued to operate theirs.

Many fans and cast members didn’t expect to ever see the canoes again. Their belief is that the canoes wouldn’t return due to Disneyland management’s desire to increase profits by reducing expenses. Each canoe requires two cast members, making the attraction expensive to operate in relation to its capacity. After all, the Submarine Voyage had just closed for a similar reason.

The good news is that Disneyland Guest Relations was right, and canoes returned in June 1999.
-Photo and text courtesy of www.yesterland.com (used with permission)

Teddi Barra's Swingin' Arcade is now gone. It is not a huge loss, as it was really small and boring compared to Tomorrowland's giant arcade and Frontierland's shooting gallery, which totally rocks. 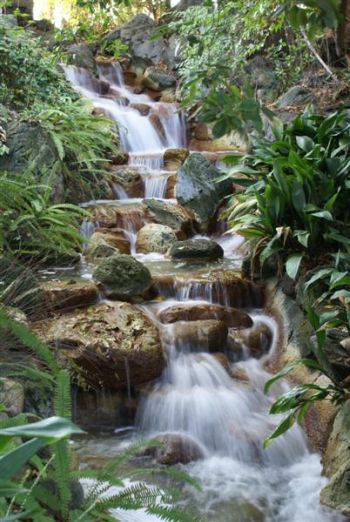 Stuffed animals and a variety of hats including mouse ears. One cool feature is that there are carrot tops sticking out of the top of the roof, and inside you can see the bottoms of the carrots poking through the ceiling.

All Winnie the Pooh. All the time. If you want it, they have it with Winnie the Pooh on it. There is a candy shop inside with Jelly Belly dispensers. You can buy a candy here called a "Tigger Tail". It is made up of marshmallows and caramel dipped in an orange-flavored candy shell drizzled with chocolate. It has ezfinn written all over it.

When you exit Splash Mountain, this is where you can buy a photo of yourself screaming like a little girl. In case your friends don't believe you had the balls. Speaking of balls, pornographic photos are immediately deleted. But the internet is magic. The website Flash Mountain provides shots of women flashing the camera on Splash Mountain. LAist is not linking to it, because although the flashing is R-rated, there is some serious Triple-X action on that site. And this here is a family show, folks. 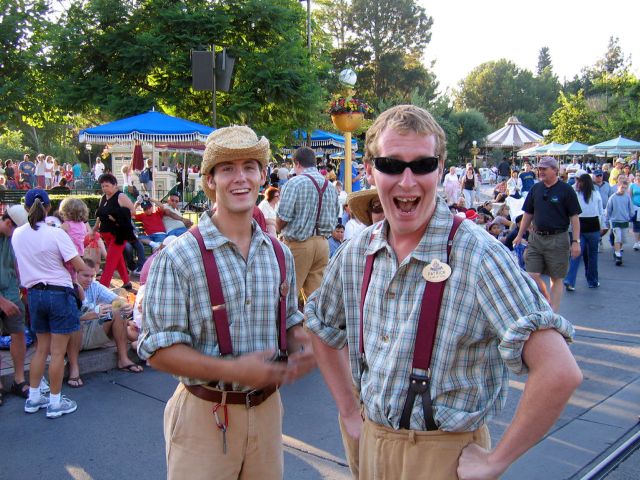 There are a few residents of the two-legged variety as well.
Photo byTom Arthur via Flickr

There was a definite change in demographics as former residents of The Hundred Acre Wood began moving in.

But even before the plug was officially pulled on the jamboree, Winnie the Pooh and his friends slowly began showing up until they eventually took that area over. In short, there are definitely more critters here than bears now. - Disneylandmagic.com

Because of the so-called "Country" bears, as well as the somewhat undignified moniker of "Critter Country", class tensions can run high. This tension was evident in an exchange during a recent inter-land park council regarding the never-ending "shirtless" vs. "pantsless" dress code debate. "Just because you live in the forest does not mean you have to act uncivilized", sniffed Snow White.

Kanga responded testily, "Where I come from, living with seven little men is not exactly civilized behavior." 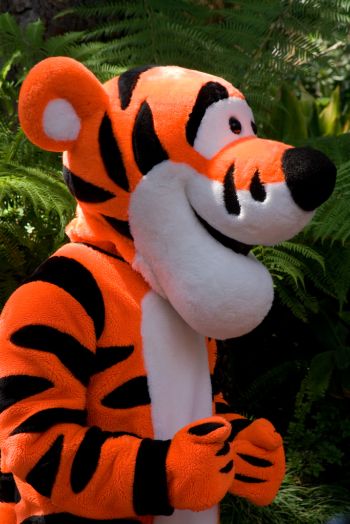 Not all critters and bears are relegated to living in Critter Country. Naturally, there are some who believe that is only because they are undesirables or "sell-outs". Kanga admitted to LAist in a recent group interview, "I call them 'Big Heads' because they are like the costumed characters that roam the park. They are critters on the outside, but all human on the inside."

In an obvious dig to Pinnochio's J. Worthington Foulfellow and Roger Rabbit, Bunny huffed, "We don't need any more con-men or tweakers here, thank you."

Henry tried to be the peacemaker, "Now, now, there are some perfectly good-hearted critters out there. What about Tod from The Fox and the Hound? Or Thumper?

Bubbles quickly shot back, "Well, they don't exactly have attractions, do they?"

Beulah chimed in, "Yeah. You don't see a Fox and the Hound ride around here, do you? Which ride is the Thumper Ride, hmmm?"

"Now, now," chuckled Henry good-naturedly, "No need to be bitches about it."

At this point, Brer Fox and Brer Bear started laughing in a really creepy way. LAist concluded the interview and went to eat a pancake shaped like Mickey Mouse.

Tigger is known to be somewhat bouncy (what was that Bunny was saying about having ENOUGH tweakers already?). But recently he has been involved in a spate of assaults, purse snatching and attacks... 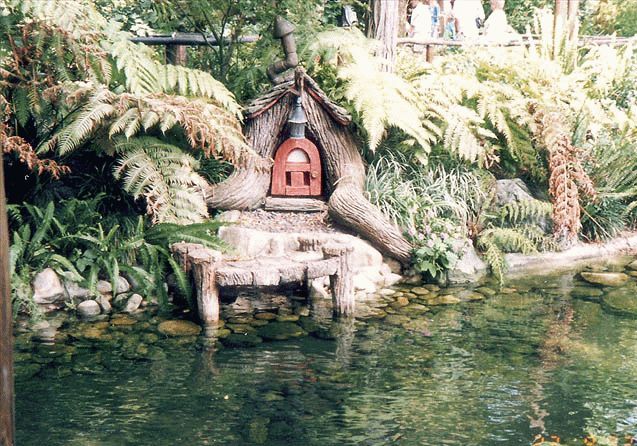 In spite of Tigger's troubles, and the looming spectre of Brer Fox, Critter Country is a happy place. With fowl, mammals and reptiles from places as different as Georgia and the Hundred-acre Wood all living in harmony, Critter Country is a celebration of diversity. As local retiree Henry likes to put it, "We only have one color here - and that's technicolor". Since its inception over 35 years ago, thousands upon thousands of guests have ventured into Critter Country to find their "laughing place". It was waiting here all along, just behind the "roller coaster panic attack place" and a spell down the road from the "over-tired, sticky, crying children place". 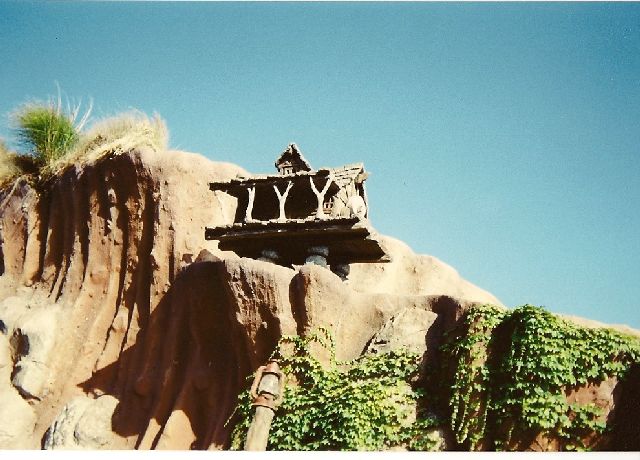