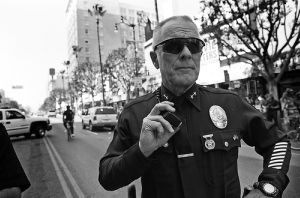 Move over dentists, the boys in blue at the Los Angeles Police Department are encroaching on your fabled love of suicide. According to a report released today by the department, officers are more likely to commit suicide than die in the line of duty.

During the last nine years, 19 sworn members of the LAPD have committed suicide, and seven were killed in the line of duty. Between 1990 and 1998, there were 24 suicides. Those rates are higher than the Los Angeles County Sheriff's Department and Chicago and New York police departments, according to the report.

The department is due to set up a suicide awareness program designed to let officers know where they can get help if needed and to help them recognize the signs of depression.

But that task could be complicated if more psychologists are not hired. The department has 19 psychologists who currently check more than 800 officers and employees of all ranks and sizes. I was never a math major, but that doesn't seem like a very good ratio.