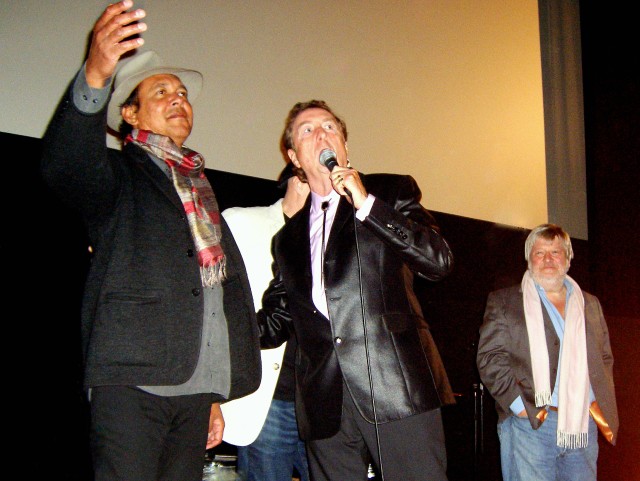 Monday The Mods and Rockers Film Festival pulled out all the stops, and reunited The Rutles for the 30-year anniversary screening of the film All You Need is Cash at the Egyptian Theater in Hollywood.

This week Eric Idle is in Los Angeles with his multi-media experience, "Rutlemania". He was joined at the Egyptian by Neil Innes (Dirk McQuigley), Ricky Fataar (Stig O'Hara) and John Halsey (Barry Wom). It is not exaggerating to call the moment historic. Everyone was looking good, especially Ricky Fataar, who looks like he hasn't aged a single day.

The first showing, which sold out in 5 seconds, included a Q & A with The Rutles. Eric Idle quipped, "This is the first time people have been re-united before being united." When asked how it felt to come together again after 30 years, Neil Innes said that he thought it was great, "because you can't keep bickering over who killed who..." Eric Idle told a story about when he and Innes were hanging out with George and Ringo, and the two Beatles started singing "Ouch" to the two Rutles. Idle realized that with himself as the "Paul" character and Innes as the "John" character, they actually formed a complete foursome. They joked about forming a group called "The Brutals" 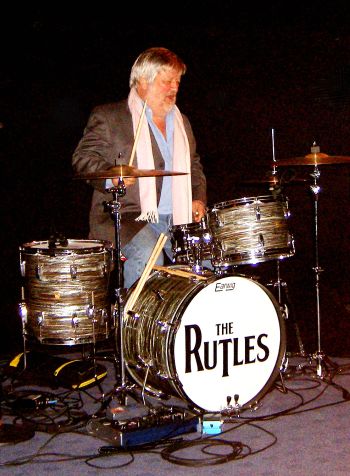 The film portion included a good number of rare clips, including the original Rutles sketch with Ollie Halsall, which was filmed for Rutland Television. The clip was later shown on Saturday Night Live, where it was then developed into a film (So ...it was Lorne Michaels' voice dubbed into Ed Sullivan introducing The Rutles in the movie. Aha).

At the end of the first showing, and the beginning of the second showing, "The Pre-Fab Four" Rutles cover band took the stage. After a brief introduction by the Rutles and a teasing drumbeat from John Halsey, The "Pre-Fab Four" rocked the hell out of

Number One
I Must be in Love
Hold my Hand

The band was supertight. They not only mimicked The Beatles, but mimicked The Rutles mimicking The Beatles, with over-exaggerated Liverpudlian accents and over-the-top moptopppiness. Normally a cover band would not get much cred from such serious fans, but the entire theater turned into one big, happy sing-along. Later, complimenting one of the "Pre Fab Four" seemed to confuse him. He responded, "Well, this is what we do - for a living." 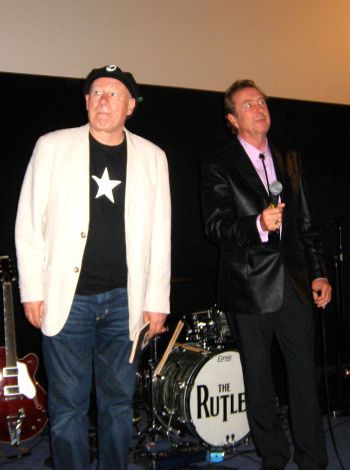 As the second screening of All You Need is Cash ran, a meet-and-greet afterparty was happening in the back room of The Pig and Whistle. All four Rutles were there, as well as a number of other rock luminaries. Blogger Dave Haber of What Goes on Beatles News was onhand and describes the historic events:

To the delight and surprise of everyone in the room, late into the evening, the event's organizer Martin Lewis coaxed all four Rutles to get on the tiny clubroom stage where some musical instruments had been strategically-placed, to give a truly historic performance! It was the first time the four had ever performed musically together, even during making of the film!

Columnist Brick Wahl summed up the evening for LAist.

[I was there because] I'm buds with John Altman (the guy with the glasses holding the horn case...you probably saw him)...he's orchestrated/arranged the tunes in the movie (and Life of Brian, etc.). Hanging with Eric Idle and Neil Innes was really a trip. A python and a Bonzo Dog ferchrissakes. Add a Patto and it was too freaking cool. I got to tell John Halsey that I received a one of a kind Patto t-shirt for my 40th birthday, which is certainly one of the odder things he heard all night I am sure. In the theatre, they were all in the row behind us, and once when there was a projectionists delay they all started singing "So Rare" by the Haircuts (i.e., Sid Ceasar et al) and I knew this was to be a fuckuva night.

This may be the first and last time all four Rutles performed together, but this is not the last you will see of The Rutles. Neil Innes told LAist that when he returns in June for the Mods and Rockers Fest to premier his documentary, The Seventh Python, he may form a trio with Ricky Fataar (Martin Lewis - seriously, the guy is magic). Currently, Rutlemania is playing at The Ricardo Montalban Theater, and John Halsey says he might tour with Neil Innes in the Fall in England. LAist asked Halsey if they might be bringing the tour to Los Angeles, to which he grumbled, "Fuck no." 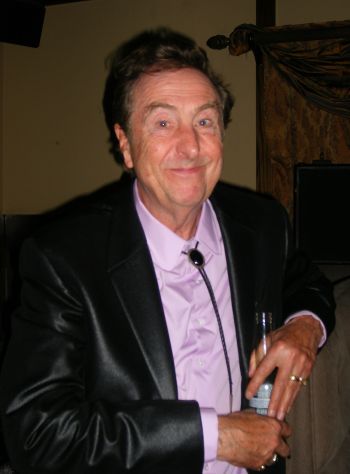 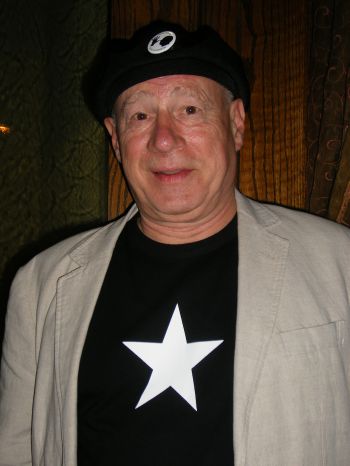 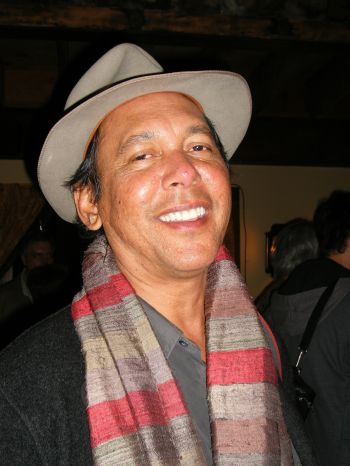 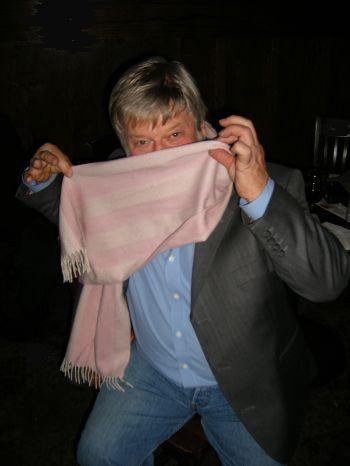 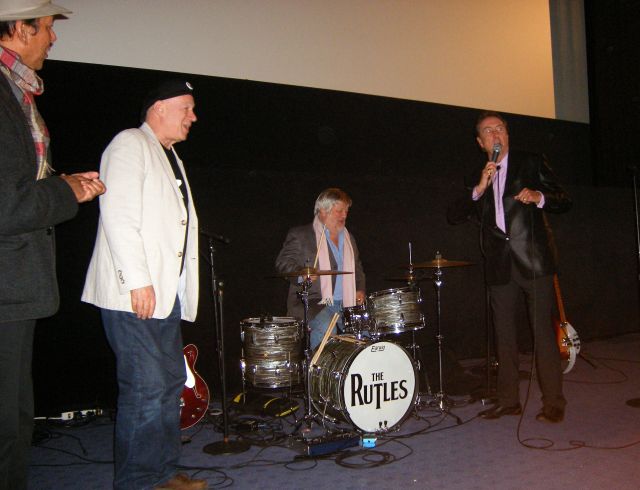 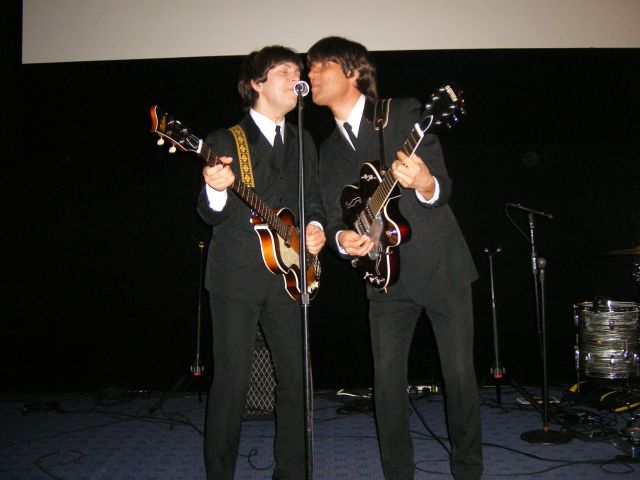 The Fab Four as the Pre-fab Four 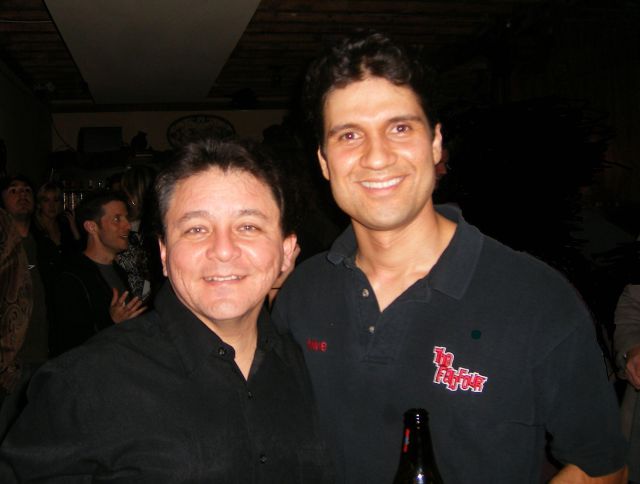 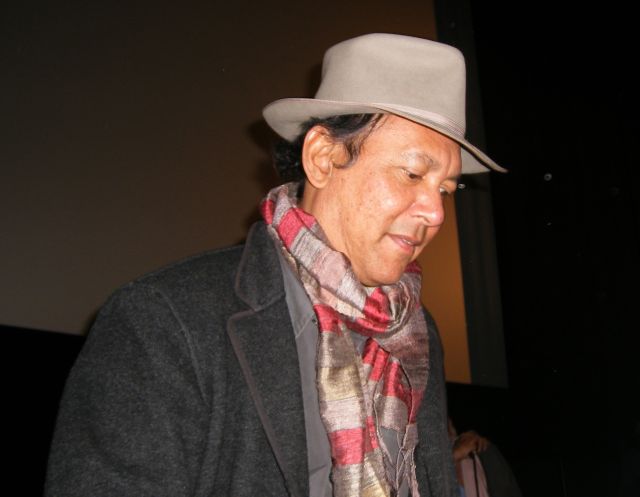 Fataar in the theater 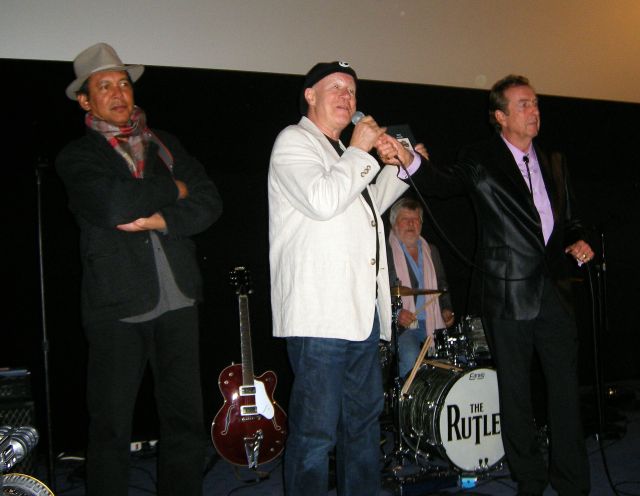 Neil Innes and the Rutles

All photos by Elise Thompson for LAist
Magic by Erica