LAist Interview: Kelly from The Dollyrots 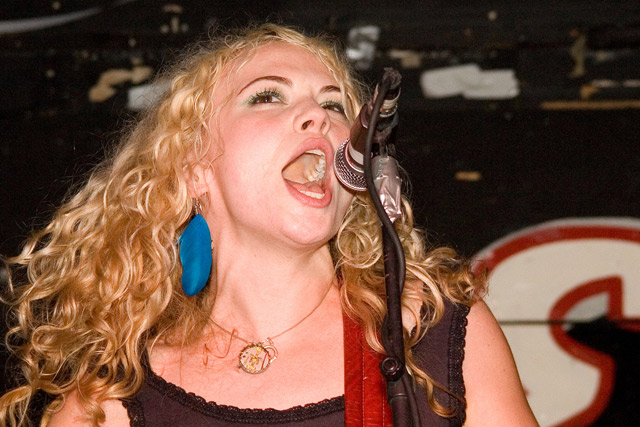 LA power punks The Dollyrots will play a homecoming show at Safari Sam's in Hollywood on Saturday, March 22. The trio has been on the road since January with Suffrajett and the "Love & Conquer Tour" in support of their latest album, 'Because I'm Awesome'. We had lead singer/bassist Kelly call in from the road to chat with LAist.

Kelly: Good, I hope this is the right time to call you. We're in different time zones and i think it got mixed up.

No this is the time i expected you. Where are you?

Umm, we are in Arizona, we were in El Paso this morning. Right now, I am at a rest stop that looks like Disney land.

So how did you get to be part of a CSI:NY episode?

It was really random. So I show up at this audition and there’s all these actress chicks dressed as rockers girls. And I was just wearing jeans, and I brought my bass, (Laughs) because I thought maybe they would want to hear me play. But they surprisingly called me back the next day. And when I was there the first time I did my lines in front of the director and a couple of writers, and I told them, “I am in a real band,” and asked them, “what kind of music are you going to do?” And so I said to use my band’s music, so eventually they called back and said that would work and used two of our songs.

In the show they thought I was the killer, but really it was our drummer who murdered someone with my bass.

So how does Florida compare to your new home LA?

The water is a lot warmer, besides if you are doing a lot art and music, it doesn't make sense to be in Florida.

How did you decide to move to LA?

It was a cool adventure.

We went on a crazy road trip, with our first drummer. We didn't want to go to NYC, because it was too expensive, and mixed up. So we visited Austin, San Diego, and San Francisco. LA really had the most charm, and also had everything you need professionally. San Francisco was cool, but was better for more arty bands. LA had the punk scene. Besides, I don't want to live anywhere that doesn't have palm trees

What part of town are you in?

What do you miss about LA when you are on the road?

Right now, the only thing I can think about is really good burritos and Ethiopian food, the beach, and going to museums. For Christmas we went down to Dana Point, and it was beautiful.

I love El Gran Burrito, its at Santa Monica and Vermont, its right at the red line station. They're open 24 hours too. And Mercado is my favorite Ethiopian place. Its good and cheap.

Its a random Thursday evening, where are you and what's your plan?

I am probably going to go to a show, and it will be Silverlake, Echo Park, or Hollywood, but every now and then I end up at a friends house with the girls, and get some coffee.

I love Obama, its so exciting either way. I think that hilary that more experience and better health care. But I don't know I think its just so interesting. Obama is so new and fresh. I feel like either way we are going to be o.k.. I would be ok with either, I was more for Hillary but the more I learn about Obama I am like, "Oh crap."

How did you start playing bass and singing?

It's a funny story actually. I played guitar when I was in high school, and my guitarist and I were best friends, and we ended up at the same college, and I was like, "hey, I want to be in the band!" Then we got more serious, and our bass player was just sorta along for the ride, and not into making sacrifices, so he quit. So I was the rhythm guitarist at that time, and he sang and played bass, so I just took over his jobs.

Would you be willing to collaborate with any other artists?

Yeah that opportunity doesn't come up much, but I always think that would be something cool. We write a lot of our stuff together. It would be nice to get opinions and criticisms of our work from people we admire and respect.

What music would your fans be surprised to learn that you are a fan of?

Probably 40's music. One of my favorite uncles had this cool old jazz collection, a few years ago he gave me 20 CDs. Also we got xm radio. So if I get tired of punk, I just put on the oldies station.

Describe life on the road when you're touring.

It's Really exciting and really exhausting. Just traveling and meeting people and meeting new people every single day was really exciting but its also the hardest part. I haven't seen my bed in weeks, and I am ready to go back! I want to get back to my mundane life of the grocery store shopping, and doing laundry.
Its weird when you go on tour, your best friend has a new girlfriend or boyriend... and they have a new routine. Its kind of weird, you have to reacquaint yourself with your friends.

What was the best city that you've toured in?

That's a hard one. The most surprising was Pittsfield, Mass., it's a small town about the size I grew up in, in western Mass. We played there before one other time, but when we showed up this time it was awesome. I mean it was a year ago we were there the first time.

NYC is the most fun consistently, and LA probably next after that.