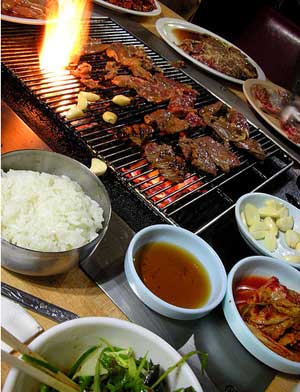 EaterLA is on a "Trendwatch" and finds a USA Today article where three Food Network chefs/personalities are asked to give their predictions on the next big food trend.

Morimoto, executive chef at Nobu in New York and who competes as an Iron Chef, sticks with Asian foods. EaterLA says he sounds legit telling the masses to look out for more "izakayas, Korean food and shochu." LAist says give the new Little Tokyo vegan Japanese restaurant a try.

International Chef Danny Boone, who has a new show, Rescue Chef (Saturdays, noon ET/PT), goes with ethnic fusion and fresh foods. The freshest you can get in Los Angeles is by foraging your salad off the sidewalk and to go truly fusion, by trying some of the city's most diverse places to buy strange ingredients.

And last, but not least, author/chef/nutritionist Robin Miller of Quick Fix Meals With Robin Miller (Sundays,9:30 a.m. ET/PT) says tapas. In the Valley, many know about Ole in Sherman Oaks, but probably the best place, at least for the very New York City like environment and crazy expensive martinis is Next Door Tapas, a plush Studio City tapas bar that you enter through via an Italian restaurant. Of course, the most famous one in the city is Cobras & Matadors where Jonathan Gold considers Steven Arroyo to be the "Bill Graham of tapas" in Los Angeles.

Photo by _ROXANNE_ via the LAist Featured Photos pool on Flickr