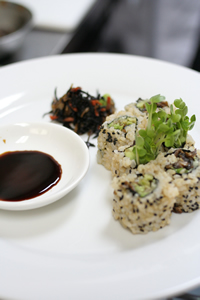 An ancient cuisine is hoping to attract new fans in downtown Los Angeles: Shojin, an organic Japanese restaurant whose menu is inspired by Buddhist vegetarian principles, has opened in Little Tokyo. Traditional "shojin" cuisine is a plant-based, essentially vegan diet, which Buddhists adhere to as a form of spiritual discipline. So, of course, what better theme for a trendy new Downtown restaurant?

I kid, I kid: but the menu is bound to appeal to L.A.'s many many green beans. Instead of meat, entrees are loaded with tofu and seitan. Instead of real cheese, you can enjoy cashew cheese (one of our editor's favorites!). You've got your miso soups and your veggie sushi rolls, but there are some dishes that might even appeal to a more omnivorous crowd, like vegetable curry stew, kabocha pumpkin chowder, and a garden club sandwich (this one's got soy cheese!).

The restaurant, which had planned a January premiere, finally opened its doors in early March. Vegan Los Angeles-based blog To Live and Eat in L.A. is giving the place a rave review, while early reports over on Chowhound are more restrained: "the place is a bit expensive for what it is, but the food overall was decent. Even though I don’t have much of a sweet tooth, I enjoyed dessert the best here." Overall, though, it's good news for Downtowners who've got a hankering for fresh, organic, healthy food, heavily seasoned with spirituality.