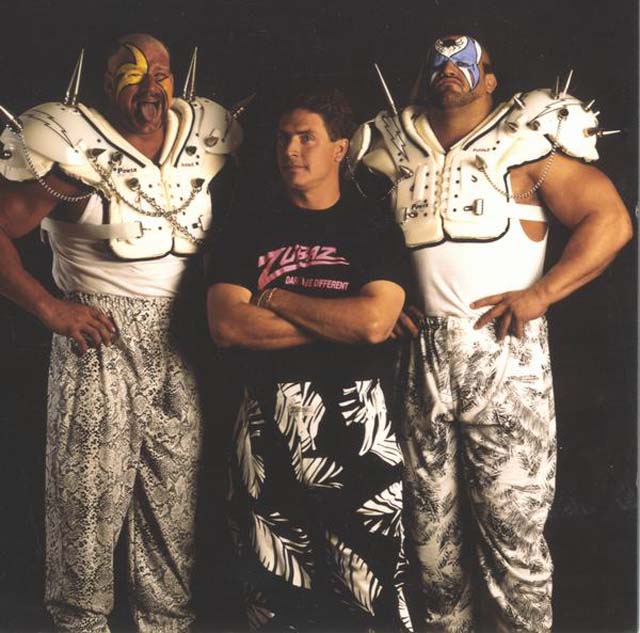 Zubaz pants are back! Here's a promotional poster from the first run featuring Hall of Fame Quarterback Dan Marino and the Road Warriors rocking Zubaz gear

You didn't think LAist would let Fashion Week come and go without at least one interview with a world-renowned designer, did you? Maybe you did. Either way we got one for you. While our interviewee may not be world-renowned, he is definitely renowned among influential fashion plates like bodybuilders, professional wrestlers and football players.

Dan Stock is one half of the tandem of bodybuilders turned fashion designers that gave the world Zubaz (pronounced zoo-buzz), the brightly colored zebra print pants that were popular in the early 1990s (at the company's peak, they made $30 million in sales). Two decades after he and his partner Bob Truax put their minds together to create comfortable and functional pants for their fellow bodybuilders, Zubaz is at it again. Stock took some time out from running his gym in Minnesota while simultaneously rejuvenating this dazzling line of pants to exchange some emails with LAist to chat about fashion, the Road Warriors, America's Next Top Model, Paris Hilton and lingerie. 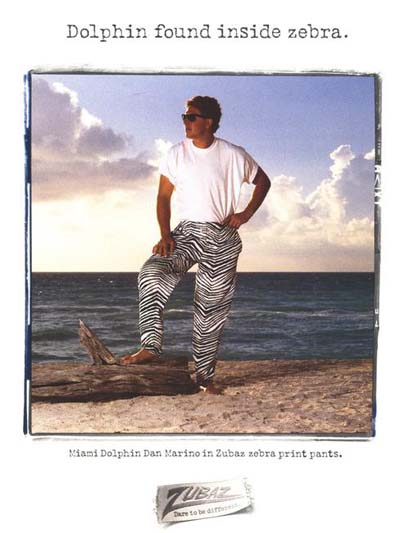 Why did you guys decide to make a comeback? When did you make this decision? How has the road back been so far? What's different this time around?

My partner and I started talking about bringing them back about a year and a half ago. We have had a lot of requests for them over the years and figured that this being the 20th anniversary of the invention of Zubaz would be a good time to re-launch it. So far so good. Almost all of our sales are done via our website, www.zubaz.com, and the only retail location is the proshop at our gym - The Press Gym, which is also our headquarters for Zubaz.

Did you have any idea back when you guys started that your idea would become a multi-million dollar company? When did it hit you that your idea had taken off?

We really had no idea how large it would become. We started selling the pants in the proshop of our gym back then just as a pant that the big guys could wear. We started to realize the potential after putting a few ads in bodybuilding and fitness magazines. The response was tremendous. Once we started selling to retailers, JC Penney and the like, sales really started to rocket up.

Two of your biggest endorsers were Dan Marino and the Road Warriors, how did they come on-board? Any chance we'll see Road Warrior Animal's son James become an endorser once he goes pro in the NFL, sort of a passing of the Zubaz torch?

The Road Warriors were partners with us in our gym back then. Sadly, Road Warrior Hawk is no longer with us, he passed away a few years ago. Road Warrior Animal's son who plays for Ohio State has obviously inherited his dad's great genetics and is a superb athlete. Dan Marino became a spokesman for us after meeting him through some players we were friends with on the Miami Dolphins. Supermodel Claudia Schiffer also endorsed the pants, we did a series of billboards with her wearing the pants that ran all over L.A. back in the day.

Is it true that you guys turned to Minnesota Corrections Institute to have female inmates stitch the pants together? If so, how did that come about? When I think of you visiting the women's prison, all I can think of is one of my favorite Seinfeld episodes, "The Little Jerry" where George tours a minimum security female jail and asks where the gang fights take place. On your visits to the women's jails did you ever see a gang fight break out?

We had friends who worked as Correction Officers at a number of prisons in Minnesota and they suggested we try their industry facilities to make the pants. Unfortunately, we never witnessed any gang fights in the women's prisons, not that there is anything wrong with that...

What celebrity would you love to see in the pants right now?
Haven't thought much about that, I guess whoever gets the most press or paparazzi following them. Maybe we should call Paris Hilton's publicist...

Are there any plans to try to take the pants mainstream, possibly with a tie-in with America's Next Top Model or Project Runway or any of the other popular reality shows about the fashion industry?

No plans at this time, although we're always willing to listen. We really don't see this as the fashion piece that it was 20 years ago. We're just having fun with it. We're finding that we're selling a lot of pants to high school and college kids. Zubaz really make the perfect " dorm wear". You can just throw them in the corner, put them on whenever the mood strikes, and be comfortable. Not a lot of use and care involved for the college kids. 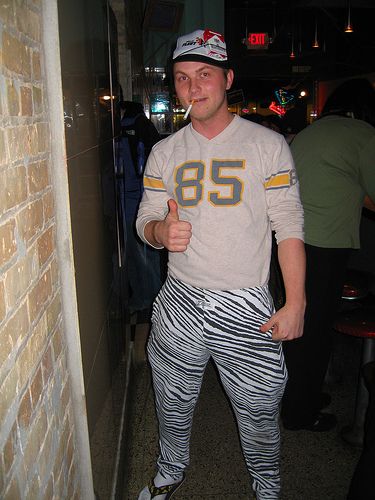 During the first go-round you had licensing deals with many of the sports teams and leagues, any chance that will happen this time around? I know the people of Los Angeles would love to rock a pair of Dodgers Zubaz to Chavez Ravine.

We're going to grow the line by adding many team colors. The licensing game has changed dramatically since we were first in it. It's really owned by a few huge corporations who control most of what is sold. We'd love to be affiliated with the professional teams but don't know if that will happen.

Zebra stripes are our trademark pattern, but we're definitely going to be adding new prints and colors. Look for shorts, caps and t-shirts to be coming out in the next few months. You never know what we might do if the demand is there. Lingerie is not out of the question...well, ok, maybe it is, but you never know.

With the amount of bodybuilders here in Venice, do you think this would be an ideal location for a Zubaz store?

It's not a bad idea, but for right now we're just sticking to the internet. We reach a lot of people worldwide this way.

Not that I can recall.

Zubaz promotional photo and advertisement courtesy of The Official Zubaz MySpace Page, photo of Zubaz clad male by the queen of subtle via flickr