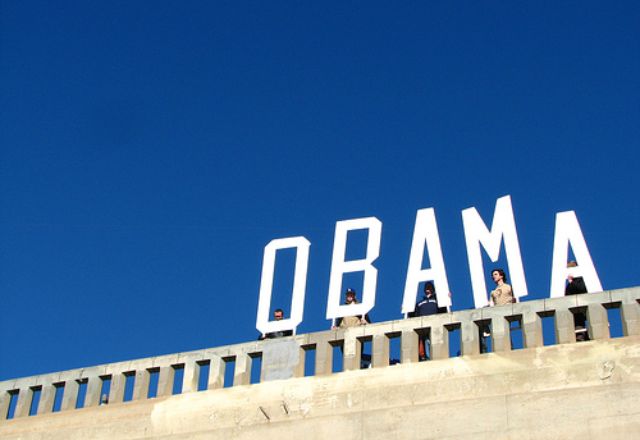 Obama supporters on the Cahuenga Pass Feb. 5, by nailmaker via LAist Featured Photos Pool on Flickr

When Americans went to bed March 4, most believed that Hillary Clinton had taken the contest in Texas that observers said resuscitated her flailing hopes for the presidency. They pointed to her win in the primary as evidence that the New York Senator had taken the state that some said was vital if she wanted to stay in the running.

Most major news outlets ran flattering articles and glittering pictures of Clinton that night bathed in red, white and blue victory ticker tape, her mouth agape in excitement. Her campaign said they "turned a corner."

But that was all before Tuesday, when most of the state's caucus was finally tallied, showing that Barack Obama actually received more Texas delegates due to his caucus win. Obama won Texas.

Because of Texas's convoluted political system, people had the opportunity to vote twice, once in the primary and then again that night in the caucus. The primary results were relatively easy to count as they basically amounted to pieces of paper in a ballot box (or some variation thereof) and were counted that night.

The caucus results were not as simple. Democratic officials had to wait days to certify the data, as there were hundreds more caucus sites than polling places with some located in far flung towns. Caucus captains were not required to report their findings to a centralized state-wide location, further delaying the count.

Perhaps based on impatience or that one-third of the state's 193 delegates were at stake in the caucus, people didn't seem to want to wait to get the whole picture. Shit, I don't blame them. I wanted to know who would win Texas that night. I was actually shocked that CNN didn't call the primary before polls closed.

That night, Clinton defeated Obama in the primary by a 51-47 percent margin. She received 65 delegates to Obama's 61. On Tuesday, that number changed.

Partial caucus results, representing 41 percent of all caucus precincts, showed Obama last week with 56 percent of the county-level delegates chosen at the caucuses to 44 percent for Clinton. The state party says it will not be able to provide a further breakdown of the caucus results from March 4.

After a comprehensive review of these results, CNN estimates that Obama won more support from Texas caucus-goers than Clinton. Based on the state party's tally, Obama's caucus victory translates into 38 national convention delegates, compared to 29 for Clinton.

And though Clinton won more delegates than Obama in the primary, 65 to 61, Obama's wider delegate margin in the caucuses gives him the overall statewide delegate lead, 99 to 94 -- or once superdelegate endorsements are factored in, 109 to 106. [CNN]

Of course this helps boost Obama's delegate count and inches him closer to the magic number, but in the court of public opinion does this actually matter?

Note: A similar story with the same headline appeared on Slate after this article was written but before it published. I only saw the Slate piece after this one was completed.