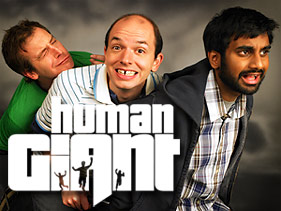 Human Giant unleashed itself upon an unsuspecting public last year via MTV and the bell just rang for Round 2 - are you ready? There's sketch comedy, there's underground sketch comedy, there's in your face on-the-streets sketch comedy, and then there's Human Giant, a team that presents, in each episode, collections of bits that are more like experimental movies than the sketch comedy we've been seeing for the last 15 years. There's plenty of parody to be sure although none of it is familiar-feeling, "safe", or boring - which is perfect for Human Giant's 11:00pm slot (what, the kids can't handle this at 10:00pm?).

Human Giant's core trio of Aziz Ansari, Rob Huebel, Paul Scheer is often supplemented by stand-up deities like Patton Oswalt and Brian Posehn, who also contribute as writers and this season Will Arnett is just one of several visitors. Other than the Season 2 premiere tonight at 11:00pm on MTV, Human Giant "aggressively" released Season 1 DVD a week ago and they'll be showing up in force at SXSW this week (dates and locations below).

LAist had a chance to talk with 2/3s of the Human Giant on-screen team, the very funny Aziz Ansari and Rob Huebel, via phone as they prepared to head to SXSW. Below are some text excerpts from the interview (sound file at the end of the post):

LAist: Well Human Giant is certainly the best comedy offering that channel has to offer.

Rob Huebel: We were doing some radio stuff earlier today and we've been trashing him, I'm sure the guy is a nice kid but we've been aggressively going after him today, it's pretty funny.

Aziz Ansari: I'll tell you why we're going after him, because there's a park I like to go to and he's been skating there all the time and he almost hit me.

LAist: One things that I love about your show is the incredible wigs that you guys somehow come up with and wear. I don't know who's fitting them on you but they remind me of what the Beastie Boys had on the "Sabotage" video, "Mike D had that one" and it's seems like they've been passed around Hollywood for a while now.

Rob Huebel: We would rather be remembered as the comedy group with the best wigs, rather than the best show.

Aziz Ansari: It's like "'Mr. Show' is a great show but clearly 'Human Giant' has better wig work". That's due to our wigmaster Jon McRae.

Rob Huebel: We have a pretty good wig guy, we got him from "The Chappelle Show" and he did all Chappelle's wigs and when that show went away we stole him.

Aziz Ansari: That quote on the [Season 1] DVD from Rolling Stone that says "Brilliant" is out of context, it's actually about the wigs.

LAist: Season 2 was all shot in New York, am I correct?

Rob Huebel: What happened was that Season 1 was shot half in New York, half in LA. And the weather in LA is too nice, too sunny and warm, there are too many nice people [in LA] that want to be on the show, too many celebrities that want to help. We wanted to make it harder on ourselves, move to New York where it is more expensive to do it, and it's cold, and you need a permit for every little thing, and there's a lot of legal hassles and wranglings to shoot there. We knew it would be way harder but it would build character so that's why we did that. We tried to make it as hard on ourselves as possible.

LAist: [Because of the fast pace of each show, many segments are required] how do you come up with all that material?

Aziz Ansari: Well basically, the four of us in Human Giant, our showrunner Tom, and our comedy friends, we all get in the writers room with our head writer, Scottie Pippin, the former Bulls forward, and pitch our ideas and any time an idea makes Scottie Pippin laugh, we shoot that idea.

Rob Huebel: Scottie Pippin does not laugh at a lot of our ideas.

Aziz Ansari: And he's a great filter for that reason, you know he has a very high standard for comedy and if he laughs at something we know it's very good.

LAist: How many shows can we look forward to this season?

Rob Huebel: There were eight shows last season and this year we decided to go British style this time and do six this season. [I do have to mention] that the DVD came out last week and we're in a bit of a DVD war of words right now with another movie that came out on the same day. This movie came out, it's called Doctor Doolittle III, and I don't want to give them any publicity or hype them but they came out on the same day as our DVD and they've been going around and talking shit about us and saying that they're going to kill us and that they're going to bury the Human Giant DVD, but we've been crushing them, we've been destroying Doctor Doolittle III.

Aziz Ansari: Just so you know, if there's been anyone who's been thinking of buying Doctor Doolittle III, just go on our website, thehumangiant.com and there's a link to download Doctor Doolittle III for free so you don't have to buy it. You can download it for free and you can use the money you save to buy Human Giant. Our DVD is a far superior product, you get all eight episodes on one disk, you get another disk with two and a half hours of bonus features and then we toss in a third disk that has Titanic on it, just because, it's a good movie you know, and we just wanted to give the consumer more for buying our DVD.

LAist: Were these done in China or how did you...?

Rob Huebel: These are bootleg copies, it's one of those things where we went into a movie theater with a video camera and we videotaped Titanic, it's completely illegal and it probably shouldn't be in there but we just went for it.

Aziz Ansani: We care about the fans.

LAist: But the Doctor Doolittle III, are you hosting it somewhere?

LAist: Well that's commitment and you really can't argue with that, so we have the [second] season coming up which people can watch that while you are on trial or at least in arraignment.

Rob Huebel: Let me tell you something else, we're not the only other show on Tuesdays at 11:00pm, there's another show on, what is it Aziz?

Aziz Ansari: FX with the rerun of "Dirt" with Courtney Cox. We have a link up for that at thehumangiant.com so you can download "Dirt" and just watch the Human Giant instead.

Rob Huebel: If anyone has the audacity to go on TV the same time as the Human Giant TV program is going to be on, again you're asking for a fucking fight.

Aziz Ansari: Courtney Cox has been talking shit in interviews like "'My reruns are going to destroy 'Human Giant' in ratings" well you know what, fuck you, we're going to put a link up to your shitty show for people to download it and then they're going to watch Human Giant and that's what's going to happen.

LAist: She's been saying that too?

Rob Huebel: Yeah, she said that.

LAist: You're just going to trash her bony ass is what you're going to do?

Rob Huebel: You can quote me on that. [Pause] After this is on the internet we're going to be in so much legal trouble it's going to be bananas.

LAist: The thing is that you... have a commitment to your product and your efforts.

Rob Huebel: It's competition, we're willing to compete with these other juggernauts, if Doctor Doolittle III, and 'Dirt' think they're such badasses, bring it on, you fuckin' bring it on.

Rob Huebel: Let's talk about that, all around the country at 11:00 we're going head to head against thousands of local news stations, thousands, and we will fucking destroy them, do you hear me? We will fucking put them to shame. What do you want to hear about? The fuckin' local weather? School closings because it's snowing? No you don't want to hear that, you want a comedy show.

Human Giant's Season 2 Premieres Tonight at 11:00pm on MTV - you can find out more at thehumangiant.com. They'll also be at SXSW this week (tell your friends if they're in Austin) at the following gigs: