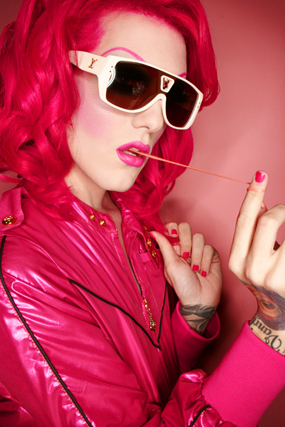 It's hard not to notice when Jeffree Star enters a room because he is wearing high heels, has bright pink shoulder length hair, is heavily tattooed from head to toe, and carries a large Louie Vuitton purse.

And it was apparently just as difficult not to notice him when he bust onto the internet scene (and into our hearts) in 2003.

Recently, and without any marketing or ads, he has been blowing doors on the likes of Justin Timberlake and Shakira in record sales on iTunes. And over at Buzznet.com he has a new release that all the kids are flipping over: Heart Surgery isn't That Bad.

We sat down with Jeffree to ask him what the deal was.

LAist: What inspires your personal style?

Jeffree Star: Hmmm. Well today is “summer,” no just kidding. It depends. I’ll literally open a Vogue and see an ad, and be like, “Ok, I need that outfit” and I’ll literally just go get it. And then it ends up looking better on me.

And I really like all that Japanese animation, and like Tokyo stuff. They just like, have fun, with no restrictions. I like fun bright stuff, but a lot of people think you cant wear it because they’re like too intimidated and stuff.

I have like 400 purses, and they have their own closet. It’s all about accessories.

Who does all your tattoo work?

Did you know her when she worked at True Tattoo?

Yea, she did a few of mine there.

So then, how come she stopped working at True Tattoo?

Because she opened up her own shop. And, all the other tattooists are jealous and they hate her… So she wanted to have her own shop, and its way more successful. All the crazy LA tourists keep her rich (laughs)

Where are you from originally?

Where in the OC?

Huntington Beach, and then I moved to Costa Mesa in 7th grade.

What do you think of those areas?

I love it there. It’s more like home to me, but I like LA better. I went down there this weekend; my mom and I went to the beach. And I had a huge umbrella so I don’t get skin cancer.

How old were you when you moved to LA?

17 years old. I was always like, the youngest, when i was in high school, you know? Everyone was like 20 or 19, so like, right when I graduated I moved out with friends.

What inspired you to get into make-up?

My mom used to be a model when she was younger, and she used to show me modeling pictures, and I just became obsessed with the fact that you could look different in every photo, and like, changes your hair. And she always had all those magazines and stuff, like Cosmo and Vogue, so I would just look through all the editorials, and be like, “ohh I want to do that.” So I started like, experimenting with her make up when she was at work, and just playing around with my friends and me. And it escalated and got crazy. 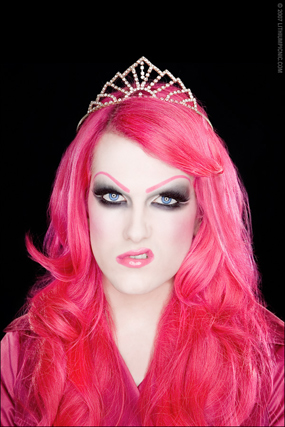 What do you do for fun?

Shop, I just love shopping everywhere. Like, the high end shopping stores. And I love going to live shows. Like, music is my main thing that keeps me happy.

What’s the best live show you’ve been to recently?

In December, I saw the Spice Girls. It was amazing. I used to be obsessed with them in 6th grade. It was a religious experience. (Laughs)

Where do you like to go shopping at? The Beverly Center?

What are your favorite bands?

I love Alkaline Trio, they are my favorite band besides the Spice Girls. And I love All Time Low, and Blaqk Audio. I will become friends with people, and I've never heard their music before, like David… I had never heard of AFI before, and they’ll play me their music, and I’ll really love it.

How did you discover Buzznet?

What kind of TV Shows do you watch?

I love “I love New York” That’s my favorite one. Those shows are so funny to me. It just makes me laugh. Oh and Rock of love. It’s just funny how casting people find all these idiots. It’s like a 5-minute entertainment high for the night, and makes me laugh.

Would you still watch those shows even if you found out it was totally scripted.

Oh I know it is. (Laughs) But it is like, half real. Like Hanna Beth, and me we’re secretly working on a TV show, and we’ve been doing stuff for two years working on it.

But then we stopped being friends, and tried to do our own thing and it didn’t work, so now we’re back together, and we each have our own legitimate agents and management, so… I think its finally going to happen, and we’re excited about that.

Can you talk about the show?

I mean, it’s all in the early stages, but I am thinking like and MTV type audience. And the show would be like, following us. 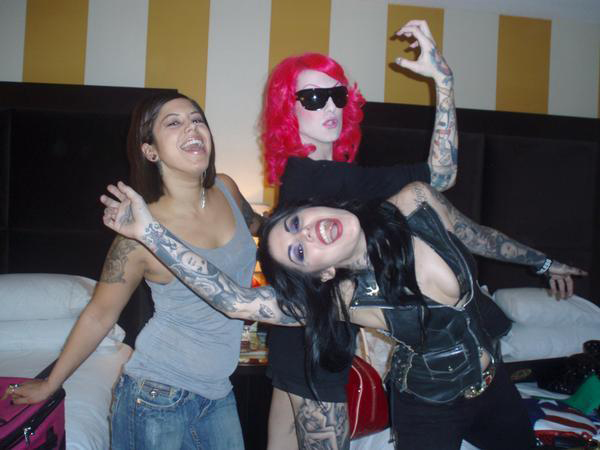 Are you surprised that people in general are so interested in you, and pay so much attention to you?

I think that there is just so much shit out there, and not a lot of real people. I mean, yeah I wear tons of make up and all that stuff, and I make look fake. But underneath it all I am probably the most real out of all the people in music and stuff. I think everyone has their gimmick, and they're fake.

Even if you’re 13 you can still see through their bullshit. And everything I do is just me being me. There is no gimmick or me trying to be something I’m not. So the thing is, I think a lot of people can relate to it.

Are you down to interact with your fans?

I think that’s what got me big in the first place. My version of a 9-5 was going online and going to shows, and just going out. To this day nobody else runs my website, like how a lot of bands have their publicist run their shit, and its all fake.

I’m the only one on there who writes back to people 10 hours a day and answers questions. And a lot of people email me these crazy stories like, “oh my dad is beating me, because I like dress different.” And I will like write back to them some long replies and let them know that its ok to be different. You know?

How did you get into music?

I had tons of friends in bands. And some people will talk shit about that, but like, it wasn’t my goal to be like, “oh I want to become friends with bands.” Usually it was that these people befriended me because they thought I looked cool, or thought I had a cool personality.

Peaches was on tour, and her drummer, Samantha, was introduced to me through a mutual friend. And so they left their tour and started to do Peaches’ last record. And they were like, “oh, we have this beat, you should like, do something on it,” and I was like, “oh that would be funny.”

So I wrote this really crazy song, which was the first song I ever wrote, called We Want Cunt. Everyone knows that song at my shows, it’s the last one we play. We just did it for fun. It’s like, really lo-fi. Looking back on it now it seems kind of crappy (Laughs)

So I just put it on Myspace like 2 1/2 years ago, and it just got this crazy response. I didn’t know it was going to be a big deal. SO I did a few more, and it just kept growing and growing. 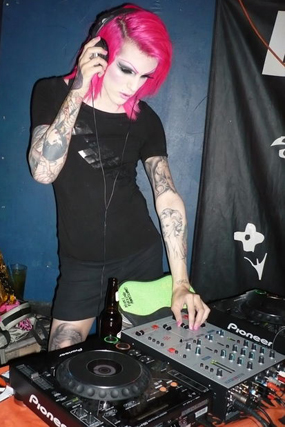 It’s true your last few tracks that you released beat out Justin Timberlake in sales on iTunes Dance?

Yes. It’s Crazy. And like right now my EP just came out and my new single. And I self release it all. You know? There’s no label or record company telling me what to do. I feel bad for these bands that are like, “oh I got signed to Sony!” And in a year they’ll be in debt, and half to tour nine months out of the year to make any money. And I just got nine new handbags this month, and I just lay around having fun. People aren’t smart. The music business is so different now. I’m not even trying to get signed. I mean, I am sure I will eventually. But for now there is no need to.

Would your lifestyle be possible without the Internet?

Hmmmm…. Probably not. So I’m lucky that I grew up in the Internet generation. And me and that whore, Tila Tequila, are the ones that capitalized on it. Her and I used to be friends but I am not into people that think they have to be like, naked all the time. You don’t have to prostitute yourself to be successful.

I love swingers. It’s like the late night hang out. After all the clubs and show we go there. It’s all about red velvet cupcakes and grilled cheese. And of course Pinkberry two times a day.

Where is your favorite movie theater?

I think the grove; I have seen Juno there like, four times now.

What do you love about LA?

Obviously the weather is nice. And career wise, everything is close. And there is a lot to do; those poor souls in Arkansas have to sit on the Internet like 24/7.

What last words do you have for LAist?

The future is bright pink so go buy some sunglasses. (Laughs)

My CD Comes out in September.

Find out what Jeffree Star is up to on his personal blog.

All photos from Jeffree's buzznet used with permission.