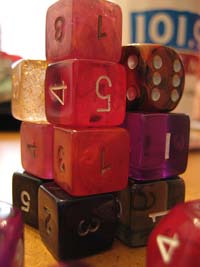 Being still somewhat youngish, there are few people that I open up to on the Obit page that have impacted my life greatly (except maybe musicians and TV actors from the 70's). Seriously, all of the great movers and shakers out there, industrialists, world leaders, inventors, Nobel Prize winners, I feel little connection to. Yesterday, when a friend told me that Gary Gygax had passed, the high school, geeky girl in me felt the end of an era like a smack on the side of my head from an orc's broadsword.

For those who don't know, Mr. Gygax co-created the seminal role playing game, Dungeons and Dragons with Dave Arneson. Gary seemed to get most of the credit though, because his name appeared on many of the rule books. Rule books that I still have packed away in storage: Dungeon Master's Guide, Monster Manuals I & II, Legends & Lore, etc.

The first time I heard about DnD was in 8th grade. I was amazed. All of that sword and sorcery and myth stuff (and horror too) that my brothers had drilled into my head from an early age, was part of some sort of game. Not your regular board game: "Connect Four!" No, but an interactive game where you got to create characters with magical powers so that you and your nerdy friends could live out the kind of sword and sorcery adventures you so voraciously read on the bus to school. A cute older boy regaled me with stories about some of the epic battles his group had put together. It sounded like fun. Did I mention that I was a brainy, little geek-girl?

My first ever high school DnD scenario was special. A friend named Heidi convinced her "friend", Brandon Lee from Palos Verdes, to run a game for us. Yes, my first Dungeon Master was Bruce Lee's son. And yes girls, he was cute but not up to "Crow" level cute, and yes, he had a lot of patience to be hosting a newbie group of nerds at his palatial manse. This was a one time favor thing, but it got our virgin feet wet enough to soon be holding our own game at friend's houses complete with hard bound books and modules written or compiled by Mr. Gygax and Co. Most people get that DnD was not invented to help your teenage popularity and social life, but it did gather together groups of over-imaginative, misfit kids and young adults who's experience of school was kind of like Carrie's. Now that roleplaying is hip, I'll downplay the dork factor of Friday and Saturday nights spent rolling 12 sided dice, eatting junk food and stealing sips out of your parent's liquor cabinet in lieu of all that sex, drugs and rock n rollin that the cool kids were doing.

Gary Gygax created a whole genre, a nexus where chance and good story-telling met. Best yet, it was an opportunity to be someone else for a few hours in the comfort of your rumpus room. Without Dungeons and Dragons, there would be no world of online gaming, role play card games, books or conventions, interactive video games that spawns roto-scoped films, a resurgance of fantasy epics on the big screen or the thousands of clones that this one imaginative fantasy game spawned. Interactive participation in most game play is expected nowadays. It's hard to think back to a time when the only characters you read about were in books and plays. We owe many hours of entertainment and good, clean, nerdy fun to Gary and those early creators of the genre. He will be missed.

E. Gary Gygax passed away Tuesday morning at his home in Lake Geneva. He had been suffering from health problems for several years. Roleplaying was his life's passion. According to CNN.com, he still hosted weekly games as recently as January. He is survived by his wife, Gail and 6 children. He was 69.