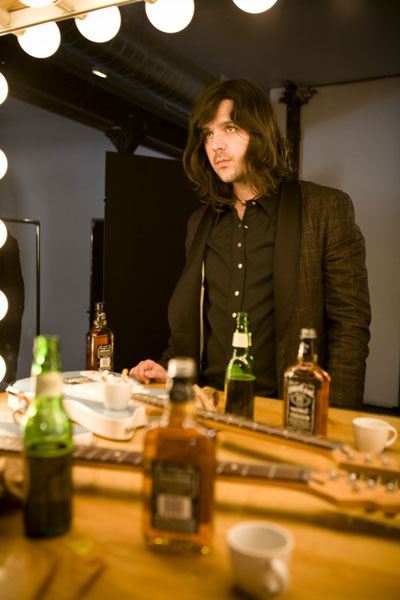 It’s shaping up to be a busy year for singer-songwriter Cary Brothers. With the fourth annual Hotel Cafe Tour beginning in just a few days and his first full-length CD, Who You Are, getting great reviews, things won’t be slowing down for him anytime soon. Brothers first received nationwide attention when his song “Blue Eyes” was featured on the Garden State soundtrack four years ago, and his fan base has grown with the release of two EPs and the new LP.

LAist was fortunate enough to catch up with this Nashville-raised, LA-based performer last week to get his thoughts on the tour, his CD and life in LA:

LAist: I'm sure you're busy getting ready for the Hotel Cafe Tour. What are you most looking forward to as you embark on tour #4?

Cary Brothers: I'm just looking forward to continuing the experience. The Hotel Cafe Tour, from the perspective of both a musician and (I believe) an audience as well, is a very unique show. The whole idea was to take a couple months away from what can be a lonely journey on the road and instead share that with good friends, experiment with songs, and basically just have a great time. I never get to see my friends anymore with so much touring, and this way I not only get to be on a bus with them, but also play music in a new town every night. That traveling circus camaraderie and energy spills out into the crowd.

The Hotel Cafe Tour schedule is definitely hectic—more than 50 venues in three months if you include the European dates—but amidst the craziness, do you get to do any fun, touristy things as you travel?

I am trying to be a good tourist. Unfortunately, with morning radio shows and in-store performances at record stores, it makes it hard to really experience the town. At the very least, I always get in touch with "road dog" friends from other bands and try to get a bite at their favorite restaurants in town. In Salt Lake City, I guarantee I will be eating a burrito at the Red Iguana.

Does the tour ever result in new music collaborations among the artists?

It definitely reshapes material that's already out there—new harmonies, piano parts, etc.—but inevitably some new songs come out of it as well. Sometimes an after-show bar gets in the way of that. (laughs) I definitely want to make more of an effort this year to come up with new songs with this batch of artists.

You once said that your EPs were like triple-A baseball and that your new record got you into the majors a little bit. Continuing with the baseball analogies, do you feel like the Hotel Cafe is, in a way, its own farm league?

Absolutely. Beyond my obvious bias, I sincerely believe that the Hotel Cafe is without a doubt the best source of new music coming out of Los Angeles. Even though there's more attention on the room now than when I first started playing there, I still feel like musicians have a chance to develop their sound in that room and get feedback from other artists in an encouraging, non-competitive way. That kind of support is rare in this town. With the odds against you in this business, it's nice to be a part of a community and have access to the wisdom of older artists when you're not batting so well.

You've mentioned that, as a kid, you couldn't stand country music, but that you've come to appreciate country-folk. Were there any artists or experiences that led you to warm up to the genre?

I think it was less that specific artists made me come back to country and more about Nashville changing. I always disliked country music because I associated it with the ever-present Southern resentment of the civil rights movement and general rejection of anyone who wasn't white and Christian that I felt around me growing up there in the 80s. As the town grew up and away from that, I was able listen to the city's music on its own merits. What I do love is that songwriters get more respect there than any town in the country. I also think I had to reject my past a little in order to appreciate what I had.

Who are your favorite new artists at the moment?

I've actually been dipping into my archives and rediscovering songs of my youth. Synthpop gems from bands like Level 42, Flock of Seagulls, and Howard Jones. The production is definitely dated, but the hooks are so spot on. As for modern acts, I've had a lot of William Fitzsimmons, The National, Sea Wolf, and Band of Horses playing on my iPod.

Each track on your new album, Who You Are, has its own gorgeous subtleties. Though I'm sure it's hard to separate one from the rest, do you have a favorite song?

I think "Ride" is my favorite. It's been with me for a while, so it's kind of like my oldest child, and I finally got to record it the way it existed in my head for this record. There's a lot going on melodically, and there's a tragic romanticism to it that I loved in Britpop tunes when I was a kid. I was such a sucker for those moody Cure songs. I made the record to be something you can play start to finish (preferably late at night), so all the tunes are just pieces of the big puzzle.

You've said that you're a melody man, but I'm curious about one of your lyrics. One day I had set my iPod on shuffle and happened to listen to "Jealousy" right after Jeff Buckley's cover of "Hallelujah." It's great how you incorporate the word "hallelujah" into "Jealousy" and I'm curious how that came about…it was a great unexpected juxtaposition with the other lyrics.

I get so many e-mails about that. People want to know if there are religious connotations and have theories about it being a spiritual song. It is in a sense, but I'd say that has more to do with residual effects of having been a church-going kid in the South many years ago. It was the only word that had enough power to shift the song in one instant from being about insecurity to confidence in a moment when you make a choice in life and damn the consequences.

I love your cover of the Thompson Twins' "If You Were Here," and it still instantly brings to mind the last few moments of Sixteen Candles. What led you to choose that song?

I loved that song when I was a kid and spent a year riding around on my bike to record stores trying to find the (under-printed) soundtrack to Sixteen Candles. It's funny that it was used as a love song in that film because the lyric is "If you were here, I could deceive you." Dark. I love it. If you're doing a cover, there's no point going for it unless you can make it your own, and I had figured out a way to make it match my stuff sonically.

(This question is from LAist's subculture editor, Anti): Are you related to Dr. Joyce Brothers?

No, but my Dad is a doctor named John, and one time my Mom was in the bank starting an account for him and when they called out "Dr. J. Brothers," she was mobbed and signed some autographs before she had the chance to admit she was not Dr. Joyce. 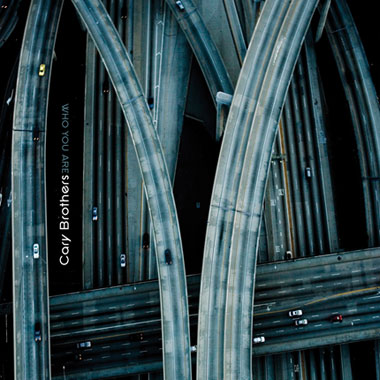 People have many different interpretations of the cover of your new album, Who You Are. To me, the image of Los Angeles freeways is reminiscent of flying buttresses in old gothic cathedrals. What does the cover image mean to you?

I wrote the whole record while living in Los Angeles, so I just wanted to pay tribute to my adopted home by having the artwork reflect my vampire existence here at night. Also, whenever I'm in a bad place in my head, I hop in my car with a great record a drive down the freeway til I have some perspective, so I guess I'm down there on the freeway somewhere figuring out life. Mostly, I'm just lucky to have a friend like Michael Muller who can take a shot like that hanging out of a helicopter in a harness over a thousand feet over the city. The fact that people see gothic arches or blades of grass from a distance is all from the talent of Muller.

What surprised you most about LA when you first moved here?

That the bars close so damn early compared to New York. Then again, that fact has also saved me on many occasions, so...

Fill in the blank: "You haven't really lived in LA until…"

a) ...you've stayed home for the day because there's a quarter inch of rain on the roads.

c) ...Andy Dick has tried to kiss you or hit you or someone you know.

Any advice for musicians trying to break into the LA music scene?

Play as much as possible at random open mics and little rooms far away from the eyes and ears of industry people and hipsters in Hollywood. Unfortunately, first impressions mean a lot in this short attention span town, so make sure your songs, arrangements, and stage comfort are ready 100% before you play a show at a Hotel Cafe, Silverlake Lounge, Viper Room, etc. Take your time. Bookers need to make a profit at their clubs to stay in business, but they also like to be the person who booked the great band that no one knows, so you can be forgiven if you don't immediately have a draw. The Beatles played a million gigs in Hamburg before they could come back and take over London.

Although the 3/9/08 performance at the Hotel Café is sold out, tickets are still available for the 4/12/08 performance at the Henry Fonda Theatre. On this leg of the tour, Brothers will be joined by Ingrid Michaelson, Meiko, Jesca Hoop, Priscilla Ahn, Greg Laswell, Jessie Baylin, William Fitzsimmons and Jim Bianco.