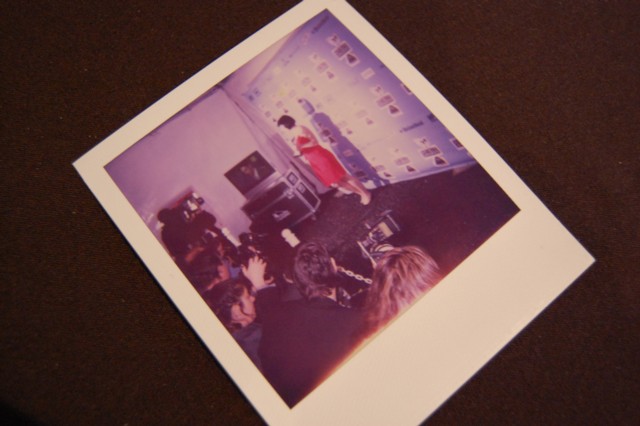 At one point several weeks ago, it seemed like a great idea to get LAist into the press room at the Independent Spirit Awards. After all, we are more than just a group blog now. We're a really fucking huge group blog that gets a shitload of hits, right?

Right? Apparently, whoever makes the decisions to let press into the 'inner sanctum' agrees because last week I managed to pick up two press passes. One for me and one for a photographer who is right now running around the press area with a beat-up old Polaroid because "it's wet out, right? Plus it's just your fucking website so it doesn't have to be good. Whatever."

I'm not, however, important enough to warrant a reserved seat at one of the tables so right now I'm hunched over my laptop in a corner trying desperately to keep the rain off my keyboard.

Plus, I'm in desperate need of a drink and they haven't even handed out the first award yet.

A few choice moments from the wet afternoon after the jump...

2:46 - The real party seems to be in the photo room, which has food and an open bar and much more yelling than the press pen.

2:20 pm - Diablo Cody wins the award for "Best First Screenplay". I miss the next award because when she walks into the press tend everyone goes completely apeshit - screaming her name, asking to see her award, pushing, etc.. They've also turned off the live feed from the awards while the interviews are happening.

2:13 pm - Talk To Me just won something but I missed hearing what because my photographer, who managed to sneak into the press room and wreak havoc with said Polaroid just got bounced out and shooed back into the photo jail. Dammit. She had the thermos full of martini.

All Polaroid photos by the fabulous Susan Nickels.

7:42 pm and I'm back at home - Around 2:20 pm, the wireless in the press tent went down and never came back up. This seemed to be a big deal only for the few of us in the dot com crowd (but it was a very big deal indeed).

After having one of the IT guys look at me and shrug (note to self: never, ever again travel without a 100 ft. ethernet cable), I gave up and hit the bar. Quite a few folks were in there - it seemed like the bar was full of video guys who just aimed the camera, hit record and then walked away to peruse the buffet line.

My intrepid photographer got thrown out of at least four (maybe five) of the various restricted areas, and got some awesome Polaroids of the event (and scared the hell out of more than one unsuspecting celeb by pointing a funky looking instant camera at them): 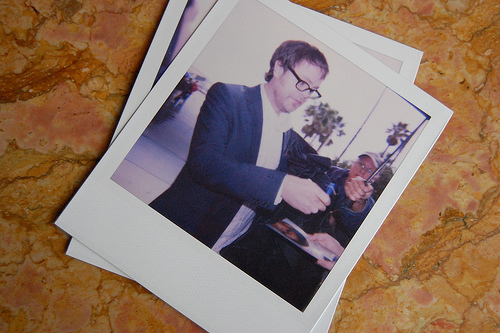 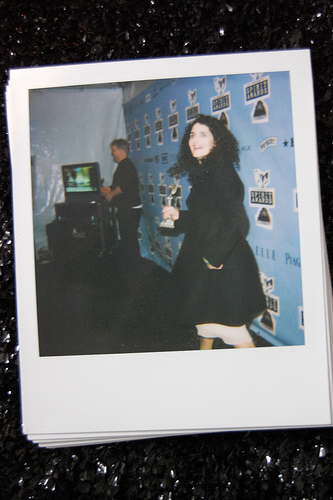 And the results are: 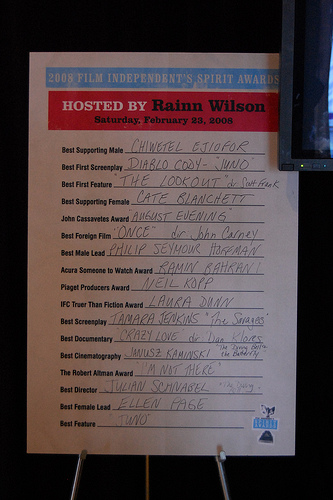 Plus, did you know that awards statues come in boxes? 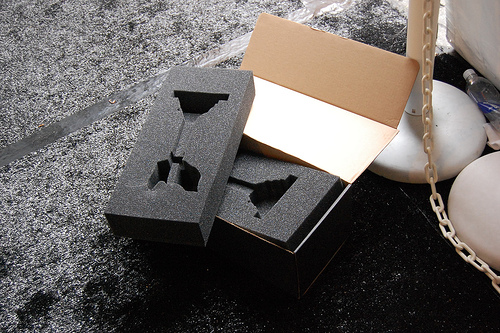