Why Does Everyone Hate Hipsters Assholes? 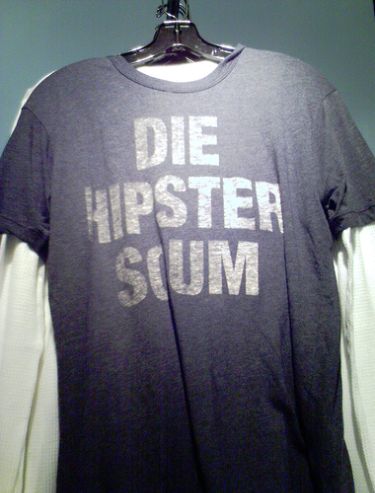 The main theme of the seminal grunge documentary Hype! is how something that by its very nature was anti-commercial became commercialized.

One thing that particularly struck me about Hype! was the grunge scene's intense resentment against the greater culture for appropriating the look and style elements of their subculture. Anti-fashion became the fashion. It lost all meaning. It fell victim to something I call the “Punk Rock Quincy” phenomenon.

That feeling of resentment strikes a chord with me, because I notice that people who came of age in the 70s and 80s punk rock movement seem to universally hate “hipsters”. And that sentiment seems to be seeping into the general zeitgeist.

By "hipsters" I am not referring to the radical college kids, the animal rights activists or the anarchists in their mohawks and Black Flag shirts. Because whatever it is, at least they stand for something.

And I'm not talking about everyone who lives on the Eastside and shops at Wacko and eats Yuca tacos. Those tacos are good, and people have to buy their hot rod and bondage literature somewhere.

Hipsters are the ones walking around Los Feliz and Silver Lake with two-toned pink and black hair. The ones wearing expensive "alternative" fashion. Hipsters go to the latest, coolest, hippest bar. They listen to the latest, coolest, hippest band. But they don't seem to subscribe to any particular philosophy or to have an allegiance to any particular genre of music. Whatever it is, as long as it is the latest and the coolest and the hippest, they have to have it. They are like soldiers of fortune of style.

I look at the hipsters, and I think, "Well, I like that haircut. I like those pants. I like Coop's devil girl and Bettie Page and and tikis and tattooes. I like Eames chairs and Millie's omelettes and funny blue-tinted drinks." So why do I resent these people for liking them?

My friend Janet says that one reason it pisses her off is because that look used to be a code. It meant something. If you saw someone walking down the street dressed the same way you were, with the same haircut you had, you immediately knew that they listened to the same records that you did.

Now that look has become generic and meaningless. People with blue hair listen to top 40. People spend hundreds of dollars trying to look like they shop at the thrift store. They have appropriated the style, yet discarded everything that the style stood for. Another friend, John, complains about the younger generation taking over his neighborhood while ripping off a lifestyle they don't really understand, "...I should be glad that I still have the opportunity to chase them off my yard to keep them from stealing my teeth or something. Not that they'd know how to fucking bite anything with them".

I guess what it comes down to is that once upon a time, we had really good cake. It was good and it was good for you. We were waging a war agains Reaganomics, nuclear weapons and the Star Wars defense system. We had a solid left-wing agenda. We had seen the scars of Viet Nam and learned from them. We were picking up the mantle that the hippies dropped when they all bought yuppie "Beamers" and became "the man".

We had the Minutemen. We had the Descendents. The Ramones were all still alive. The fashion was fun, and goofy, and like bandannas in our back pockets, it let us know who each other were. It helped us find each other in a hostile society.

It was fucking cake, and the blue hair and the cartoonish clothes were just icing on the cake.

I think the reason people hate the hipsters so much is that they only have the icing. And who wants to just sit down to a big bowl of icing? It makes your teeth hurt.