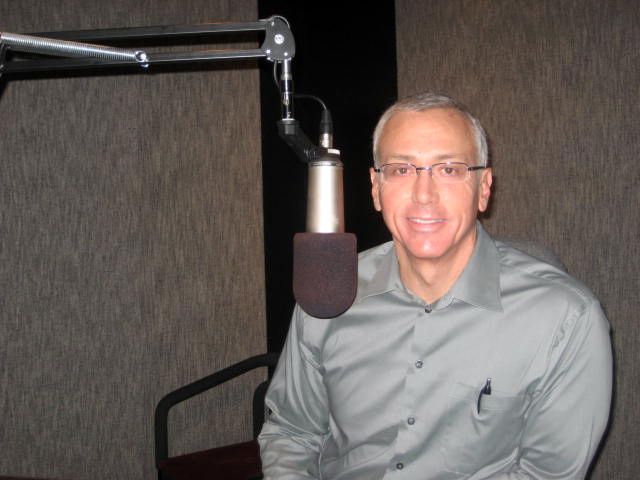 Chances are you’ve heard of Dr. Drew Pinsky, board certified addiction medicine specialist, either through his popular late night radio program Loveline, or recent TV hit show, Celebrity Rehab. What you may not know is that in addition to the two programs, Dr. Drew also has another radio show on KGIL 1260 AM. Monday through Friday, from 11 am -1 pm, Dr. Drew opens up the phone lines and explores broader health topics, from his vexation with medical insurance companies to rebuilding lives and relationships following addiction. In his daytime radio show, Dr. Drew’s no nonsense, to the point discourse illuminates listeners and provides them with a better self and social consciousness.

Recently, LAist sat down with Dr. Drew before his KGIL radio show to discuss mental health, addiction and STD's.

Interview after the jump!

ADD and ADHD seem to have become a growing dilemma. I looked up some statistics and one said that recently as many as 1.6 million elementary school-aged children have been diagnosed with Attention Deficit/Hyperactivity Disorder and the numbers seem to be growing each year. In your opinion, are these numbers real or do you feel that children are being over diagnosed?

Well, they’re being over diagnosed in urban centers and under diagnosed in rural and suburban centers to some extent. However, the literature is exquisitely clear - kids that are properly diagnosed, if they’re treated under the age of 18, there is a dramatic benefit. Absolutely. It’s a categorical fact. And when I first started seeing all the amphetamine addicts that I treat, I thought, well of course we must be creating them by putting kids on amphetamines when they’re younger and what not. So I started to keep an eye out on literature very carefully, and the literature, the science is categorically clear. You put kids on Ritalin or other stimulants properly, properly diagnosed, under the age of 18, then there is less addiction and behavioral difficulties. Everything is better.

After 18 it gets a little more confusing in that often times the genetics of addiction then can take hold and it’s a whole different matter. That’s where it gets controversial is after 18. But prior to 18 it’s quite clear that there is a dramatic benefit to be had. The problem then though is the over diagnosis in certain situations or improper diagnosis. You understand there are primary care doctors that are diagnosing this and they shouldn’t? It should be done under careful diagnostic testing by a neuropsychiatric forum. That’s rarely done unfortunately, so that’s the problem really. Everyone is getting put on it. Not just the people that need it necessarily. So there’s over diagnosing in certain situations, and then the kids out in the peripherae are not getting diagnosed properly and are being under treated.

Are alternative treatments for ADD or ADHD, such as changing diet, effective?

That clearly has been shown to have no effect. Listen, those studies are not neuropsychiatrically tested. Not good stuff. It’s very clear if you have a kid with that problem there are two interventions. One is behavioral interventions, which are really quite good, and pharmacological interventions. But once again, these are complicated cases that need to be followed up by skillful people.

How do you feel about the increased usage of Adderrall and Ritalin for college students to study? Do you think it’s on the increase?

Bad times and it’s clearly on the increase. That’s a whole different topic. It’s the pill society we’re in.

You’re right. The perception is, “What’s the big deal? These guys have been using it since they were six and it doesn’t hurt them. Why can’t I use it to study?” You know what? They’re not irrational. The studies also show that they perform better when they’re on it. Anybody performs better when they’re on stimulants. So how do you talk a kid out of that when it’s in everybody’s medicine cabinet? The problem is, like any medicine, they’re dangerous. All medicines are dangerous. There’s not such a thing as a medicine that couldn’t potentially kill you. Medicines are all dangerous and we’ve completely lost track of that.

So, for example, what would happen to a college student that doesn’t need Adderall and excessively uses it? What are the long-term effects on their brain?

What type of addiction has become most prevalent today?

The big problem in most places right now is pharmaceutic addiction. Addiction at the hands of well meaning medial professionals or people who just get their hands on other peoples medication. Pharmaceutical addiction is the problem right now. My standard admission is an otherwise high functioning person, you know a professional or a person that has a family and a job, who becomes strung out on an opiate or benzodiazepine, like valium, because of back pain or headache and then now has chronic pain and now is addicted. It’s just the standard case now.

I mean, heroin is alive and well, that’s the other thing. A lot of the things you see in the press, the crazy behavior, that’s heroin. And for some reason, heroin gets carefully protected. People aren’t willing to step up with heroin; it still has a stigma attached to it. It’s really weird. For instance, Chris Farley, do you know what he died of?

Of what? Well, that went down as “Hey, fat guy on cocaine.” Remember? Stimulant, big fat guy, and he got a heart attack. No, he was a heroin addict that just died of a heroin addiction. Anna Nicole Smith, that was an injection opiate death. She had a big abscess on her butt, it got septic, and that’s how she died. And for some reason, we are not putting that into focus with the opiate addiction problem. It’s really rather interesting.

Do you still practice at Las Encinas Hospital (behavioral healthcare center)? What do you see on a regular basis?

We see the sickest of the sick. We are a freestanding psychiatric hospital with comprehensive addiction and medical services. All the people you see on TV, when they get really sick, that’s when I get them. And we keep it very secretive. I’ve treated a lot of the stories you see in the press and you never know. There’s nothing we can’t deal with.

How do you feel about rapid detox services?

It’s a waste of money. One, a lot of the people tend to remain sick afterwards. I can get anyone off of opiates in 3-5 days. You don’t need to spend all that money on that. It’s not that big of a deal to take somebody off opiates. The problem with opiate addiction is keeping them off. How they feel when they’re left without the opiate is a very painful state and that state lasts for a long time. The rapid detox does nothing for that. It’s an interesting conundrum.

Once you’re an addict, you’re always an addict?

It’s a genetic brain mechanism that gets triggered. Once it’s on, it’s on forever. It’s a disorder of the Measel Limbrick Reward System. It’s a part of the brain that’s well outside of consciousness. It’s an automatic motivation system. So thinking becomes distorted, improper. All the feelings are distorted and affect the mind.

How many times do people fall off the wagon before they really start getting on the road to recovery?

Many times. My lead counselor was treated 22 times before he finally had sustained recovery and he feels each one of those was an important thing for him.

You know the Celebrity Rehab program? These people were amazing and were so courageous and did such hard work, but are still struggling. I told them in the very beginning, this is just the treatment. All we do is enroll you. The treatment process takes years. There’s this crazy notion that once you go into a treatment center, it’s a car wash, you walk in and you walk out and you’re all better. No no, you’re just enrolled in a process that you have to diligently participate in for years.

Okay, time for sex questions. As far as STD's go, which is worse, herpes or HPV?

That’s a philosophical question. Would you rather die burning at the stake or hanging by the neck? In terms of frequency of infection, HPV is clearly worse. In terms of inability to control or effectively treat, herpes is worse because herpes is permanent. There’s no treatment. There’s no vaccine yet. We have a vaccine for HPV and everyone should be getting it. It’s bizarre that everyone hasn’t.

Aren’t there some strains of HPV that the vaccine doesn’t affect?

Right. Look, 5000 young women die a year of cervical cancer. 80% maybe 95% of those caused by HPV. Is there a conversation we need to have about when you need to get that vaccine that has no side effects? What is the thinking? You’re saving 4000 women’s lives with the vaccine. Give me one argument why people shouldn’t get the vaccine! If it was 5000 men, I think we’d be having a different conversation it seems to me. I can’t get my head around it.

I guess people don’t get it because there are 27 strains of HPV and the vaccine doesn’t cover all of them.

There are 5 strains that cause cervical cancer. Other than these five, the rest go away by themselves. Even the ones that cause warts can be a problem. They’re more contagious. They’re more to proliferate. It can be an issue. Once you have warts, you don’t know if you got one of those five or not. But, none of that obviates the need for a vaccine. Even if you have the warts you want to protect yourself against the ones that can cause cancer. The only argument against the vaccine is cost. It’s expensive. You’re literally asking at the point, how much is a life worth? It’s unimaginable.

You can listen to Dr. Drew Monday-Friday from 11 AM - 1 PM on KGIL 1260 AM. Don’t have a radio near you? Thank God for the Internet! The KGIL website live streams the show.

See Dr. Drew in person! He’s giving a talk at the Getty on Fragonard and the experience of love through fine arts on Feb. 22.

Also, watch Celebrity Rehab every Thursday at 10 PM on VH-1.

Photo by Sarah Ardalani for LAist