Encino Home 'Torn in Half,' Others in Danger* 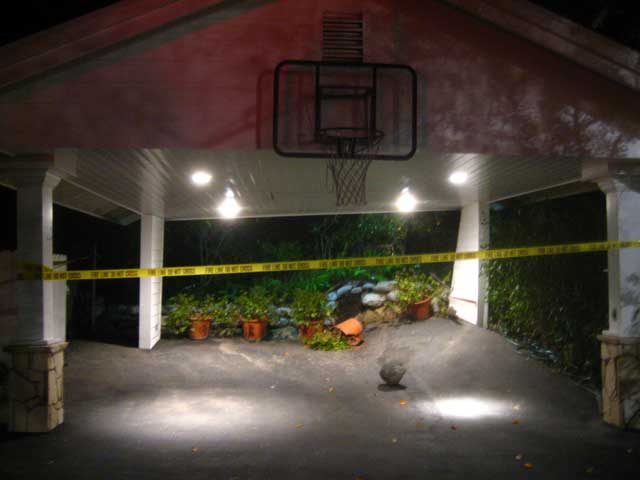 UPDATE, 11:30 A.M.: The Daily News reports there was no water main rupture as originally indicated in the early alerts by the fire department. "... we believe we have water that has seeped below this residence on the upper street going down to the lower street and, unfortunately, has dislodged the foundation and the solid ground and is starting to slide." LAFD Battalion Chief Richard Markota told ABC7 in a pre- dawn interview according to the newspaper.

UPDATE, 8:30 A.M.: The fire department announced this morning that the source of erosion has still not been located. Approximately twelve people have now been evacuated and two homes have been red tagged.

This story is an update from a post last night

Standing in the back yard of one evacuated homes on Valley Meadow Road in Encino, you could hear the hill creaking, or maybe it was the wood of the garage cracking. Whatever it was, firefighters on scene said if you hear a lot of noise, it's time to leave now (probably best to run). But this is the most peaceful and quiet emergency one can imagine — everything has a calm to it.

Upon getting home last night around 9:30 p.m., the owner of the home on Valley Meadow Rd. (pictured above) returned to a significant bump in the pavement of his garage and could overwhelmingly smell gas. It wasn't like this at 6:00 p.m. when he left for the evening, there was something wrong coming down the hill from the house above. He called gas company who in turn called it in to the city when fire and police were sent out.

What happened was a water main that broke at 15940 Skytop Rd., a 1959 hillside end of the cul-de-sac home that sold for $1.8 million in recent years. According to neighbors, the house has been abandoned for two years and the owners were trying to sell. Neighbors speculate the move was due to floors warping due to water problems. Last night, a couple years later, it's more than just floorboards — headlines read "House Torn In Half."

A total of four homes with seven people were evacuated for the night with no injuries. Initial reports by the Los Angeles Fire Department said that the Skytop home had large cracks, a cracking foundation, was moving and in imminent danger of collapsing.