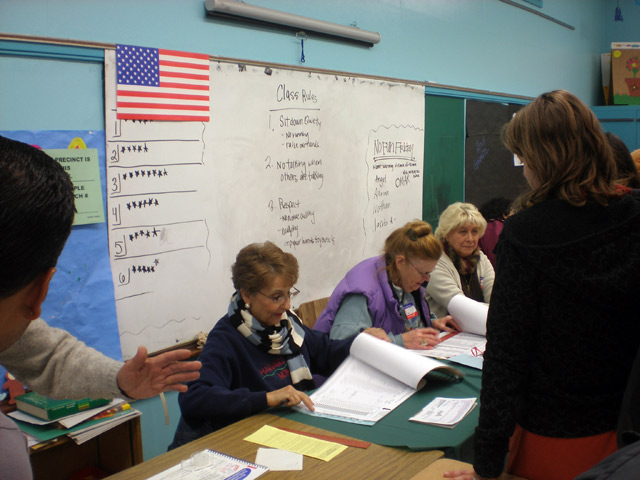 
We're getting reports of problems from readers, writers and the media. John Ennis, one of the founders of Video the Vote, gave LAist this update. Most of the confusion today is over people who are not registered as Democrat or Republican who want to vote in the primaries. The issue might be that they moved and they thought they were up to date. If you are a non-partisan voter, all you have to do is go to either a Democratic or Republican voting booth. Other than a few precincts not opening on time, Ennis says things seem to be running smooth, but it's early in the day he warned. To report a bad voting experience, call Video the Vote at 866-OUR-VOTE

Here are some other comments we've heard around the interwebs, if you have any stories to tell, let us know in the comments!

"The board of elections failed to deliver voting equipment to polling places ALL OVER LOS ANGELES... Developing..." [Drudge Report]

"Neighborhood friends and I voted this AM over at the Fairfax Library Branch. There was a delay because the machine that "counts" our inked up ballots was on the fritz. The staff was overwhelmed and frankly didn't know what to do. Two folks said 'Get a Mac.' It was funny and sad, and scary. I thought the machine was a Diebold and therefore our Demo votes would somehow toggle over, or just toggle off—but after some research, this is what that machine is: http://www.inkavote.com/precinct_ballot_counter.htm" [Reader submitted]

"My Brother-In-Law just came back from voting this AM — he's registered Independent and wanted to vote in the Primary. I'd told him he could just request a ballot to do so. They told him he could not vote for a candidate. He said he thought he could, but they said because he is IND, he can't vote. That is an outright lie! I've tried to reach the Country Register to get someone over to straighten those people out — as who know how many votes they are effecting! It's in 91342 at the American Legion in San Fernando... Please remind the independents that they CAN vote in the Primary and not to accept anything to the contrary and if ANYONE is near the American Legion in San Fernando — please go in and explain voting rules to the people 'in charge.'" [Reader Submitted]

Note: The Independents rule is explained here: 'Independents' Can Vote for Democrats but Not Republicans in California Primary