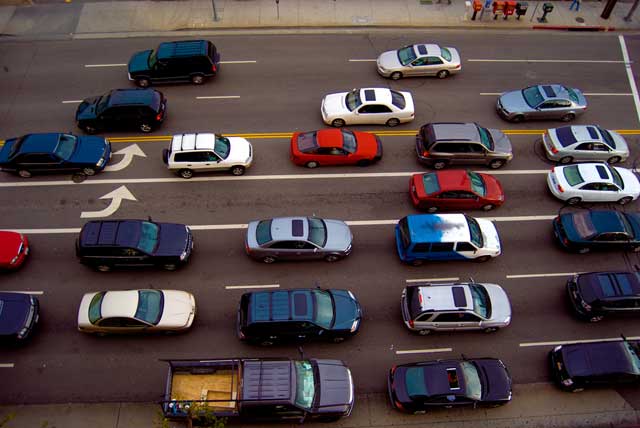 Photo by manmadepants via the LAist Featured Photos pool on Flickr

"Traffic congestion is unfortunately a way of life for most commuters in Los Angeles," Mayor Antonio Villaraigosa starts off in his introduction to the 2008 Traffic Relief Initiatives report released on Wednesday. The recent budget crisis you-better-vote-for-measure-S-next-Tuesday theme and undertones are definitely present: "Now more than ever, as the City faces tight budgets and an uncertain economy, we have an obligation to deliver that relief in the most efficient and cost-effective way possible."

But this is the way everything in government should be done — as fiscally lean as possible while still producing high quality results. And so goes the Mayor on his ten budget-minded traffic initiatives: "Over the next 12-16 weeks, the Department of Transportation and I will mount an aggressive campaign to implement a series of traffic relief measures that use existing resources in a smart, targeted manner to optimize traffic flow on our local streets and roads.

The following are excerpts, sometimes in fulls, from each of the ten initiatives. The full document can be downloaded here.

If you have bad judgement of depth and timing, then you should probably avoid these ten intersections. It's amazing how many people do not understand that when there is heavy congestion, do not cross the intersection until there is space on the other side. Of course, the annoying part is when you're waiting for that car to move up, some jerk takes a right turn on red filling that spot, forcing you to be in violation.

During the morning and afternoon rush hour periods, too many drivers try to cross busy intersections and end up stuck in the middle of the street. Unable to move forward, these cars block oncoming traffic - a violation of the California Vehicle Code - and create gridlock and traffic jams at some of the City's busiest intersections.

The Department of Transportation has identified 10 intersections displaying chronic blockages and causing unnecessary gridlock across the City, and will assign two
traffic officers to each area. These officers will record license plate numbers and other identifying information of vehicles blocking each intersection. With the help of video cameras recording the violations, officers - including both peace and parking enforcement officers - will issue formal citations to the registered owners of each vehicle and impose penalties on all offenders.

The first three Tiger Teams, who are still in action on Wilshire, Ventura and Crenshaw Boulevards, have towed more than 27,000 illegally parked cars and issued nearly 10,000 citations for rush hour parking violations. 27,000 cars? That's like a small city!

As part of the City's comprehensive set of traffic relief initiatives, Mayor Villaraigosa will launch Tiger Team IV, which will focus its efforts along the four-mile stretch of Sunset Boulevard between Vermont Avenue and Laurel Canyon Boulevard. On top of the deployment of extra officers and tow trucks to this portion of Sunset Boulevard, LA DOT officers will use new License Plate Recognition (LPR) technology to identify violators, cite owners of illegally parked vehicles and investigate claims of automobile theft.

This is actually not a thrifty proposal. Luckily, the state gave $150-million towards this.

In the coming weeks, Mayor Villaraigosa will unveil two new signal synchronization projects in the Westchester and Mid- Wilshire areas.

The Priority Arterial Program is a four-year City effort that examines the most effective ways to optimize travel times and reduce congestion along major corridors in Los Angeles. This program will involve a comprehensive analysis of each corridor, followed by signal timing improvements, consistent parking restrictions and possible lane re-striping for preferential traffic flow.

After evaluating these two initial steps, the City plans to re-stripe these boulevards in third phase of the project, adding more westbound lanes on Olympic and more eastbound lanes on Pico.

According to a LA DOT study, travel speeds westbound on Olympic Boulevard were improved by as much as 31 percent and eastbound on Pico Boulevard by 45 percent. That means commuters will spend less time facing stop-and-go traffic or enduring the slow crawl of cars clogging the I-10 freeway and most major streets.

More of that signal-timing jazz.

Operation Bottleneck Relief identifies the most congested intersections in the City and seeks to reduce delays through signal-timing improvements.

Phase II of this initiative will evaluate and enhance the 100 most congested intersections in Los Angeles, providing additional relief and ensuring shorter commute times for drivers across the City.

Phase I of this program - launched in 2006 - examined 98 of the busiest intersections during morning and evening rush hour periods, analyzed all traffic data, optimized signal timing, and reduced overall delays by 32 percent - saving Angelenos a total of 244,000 hours during their daily commutes.

At the center of this effort rests new, state-of-the-art "Park & Pay" meters, which feature step-by-step payment instructions and allow drivers to use a wide range of parking payment options, including debit cards, credit cards or cell phones.

In the first step toward modernizing the City's 40,000 existing parking meters, the Mayor and LA DOT will replace 5,000 on-street meters with advanced technology single-space meters and multi-space "Park & Pay" stations throughout the City.

Same old, same old... Hollywood & Franklin is getting fixed. Potholes are being filled.

Now here's something exciting and very useful, a small step in the right direction.

Key intersections throughout the City face a high volume of pedestrians on a regular basis, making it difficult for motorists to turn right and left, and endangering residents, shoppers and workers trying to cross the street.

In order to enhance pedestrian safety and improve traffic flow, LA DOT developed plans to install 10 all-way crosswalks at some of the City's busiest intersections.

These crosswalks place pedestrians and vehicles on separate signal cycles, allowing people to walk across the street without having to dodge oncoming traffic.

This proposal also gives pedestrians the option of crossing an intersection diagonally.

Here's a rehashing of something we already knew about.

Following the successful completion of the 30-30 Left Turn Arrow Initiative - when LADOT crews installed 30 left-turn signals in 30 days - Mayor Villaraigosa launched the "Right to Turn Left" initiative. Through this program, LADOT will build, install and
activate 100 left turn arrows throughout the City between January 2, 2008, and June 30, 2008. The total cost of this initiative - supported by previously allocated funds - is $3 million.

The Mayor promised he would be taking the bus more often. We're more concerned over his hummer-loving Transportation Deputy.

Since taking office, Mayor Villaraigosa has made promoting and expanding public transit options a top priority in his transportation agenda.

As part of this effort, he has encouraged LA residents to utilize the metro and bus systems throughout the City. In the coming months, Mayor Villaraigosa and City Council members will work with the business community to develop incentives for employees at the City's principal job centers to use public transportation, commute to and from work during off-peak hours and take advantage of telecommuting opportunities.

What's missing from this? Bicycles.