A Tremendously Efficient Way To Make Life Harder for Californians 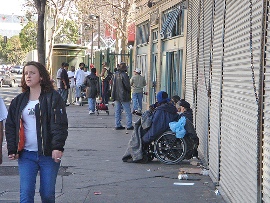 Just in time for spring, the LA Times is reporting on something I think would just go marvelously with that recession you've been looking at:

Before we go any further, jut let that sink in. How pleasantly banal it sounds. Like "Proposal aims to change terms of your relationship from monogamous to yerdumped," or "Proposal Aims to replace your sweet Graphic Design Job with minimum wage position at Wal*Mart." Which is to say, it's a Very Bad Idea that's going to hurt a Lot Of People while at the same time Totally Screwing Them. Which I have to respect because that's really hard to pull off.

More than 100 owners and operators of apartment buildings and mobile home parks spent nearly $2 million to put an initiative on the June 3 ballot to phase out California's rent control laws. About 1.2 million people statewide are covered by such laws.

Los Angeles, which has 626,600 rent-controlled residential units, could be affected more than any other city if the measure passes.

Well that's retarded. How did so few people get something on the ballot that's so bad for so many other people?

Proponents tout the measure as one that would limit government's use of eminent domain, preventing the taking of private property for private development. Although that is the first provision of the measure, it goes on to phase out rent control. Opponents have dubbed the measure the "Hidden Agenda Scheme," in part because rent control is not mentioned in the ballot title.

See folks, see?!? This is why you should NEVER sign those sinister grocery store petitions. Get a card, go to the website. Read for yourself. They're always full of secret crap like this. My Girlf and I were coming out of Vons a few months back and we were almost swayed by the reform and clarification of Eminent Domain when we noticed the fine print, which stated, as you can see, that reforming ED somehow involves revoking the rights of people who aren't rich to live within their means.

People seem to think rent control is a scam designed to allow mythical lazy people to shirk their responsibilities by never having to pay "fair" market rent values. Those same people are also laboring under the delusion that rents and real estate prices are rational and based on actual demand. I think that's cute, like when you meet a 13 year old who still believes in Santa. The rest of us know that the price of Real Estate, much like Air Jordans, is as artificial as the "grass" at the Rose Bowl. It's driven more by status envy, hysterical mob mentality and a wretchedly corrupt, unregulated barter system than anything else, and those of us who've lived in LA during the last decade know that rent control is the only reason it's still possible for anyone whose last name isn't Kardashian to live here. And even that almost isn't enough.

My Girlfriend used to live in Echo Park, right down the street from Brite Spot, Sea Level, Little Joy, Downbeat Cafe, and the lake itself. It was really neat neighborhood, right? Also, during the years they lived there, someone once got themselves shot by gangsters in front of her house and bled to death in the yard next door. Some other random guy got shot and killed a block over. One of the windows in her house was shot out by random bullets, the origin of which we still haven't figured out. At least once a week we were woken up by extremely low flying police copters zooming through the neighborhood, looking for lowlifes. Drug lookouts hung ominously on the nearest corner and their dealers literally gave curbside service, after 2 AM of course. And did I mention this was disputed territory in a low temperature gang war?

Naturally, her landlord was able to sell the place for almost 700 Grand. So you tell me, is Real Estate rational?

I'm going to say no. And if it isn't rational, then why should people be subjected to its caprice as though it were? Fact is, LA's rent control policy was the only thing standing between my girlfriend, who makes what would be a very decent living in any other city, and homelessness. These policies prevented the new landlords from kicking her out as soon as they assumed ownership, and jacking up the rents to levels comparable to the neighbors. They prevented the new Landies from evicting her without reasonable warning. And they forced them to pay a relocation fee that literally made it possible for her to find a new place, one I might add is more expensive, significantly smaller, and much farther away.

That's the 'ucked up thing about gentrification in LA; we're getting everything that sucks about the gentrification process - extortionate rents, the majority of local residents priced forever out of home ownership, formerly wonderful neighborhoods filled to the brim with rich tools, local culture destroyed by upscale chain clone entities, rising homelessness - but none of the supposed benefits. Gentrified neighborhoods remain high crime, run down, economically stratified, violent urban shitholes, only now you're paying through the nose for the privilege of living in them. And this, apparently, is the Free Market in action.

Rent Control is one of the few things that barely, and I want to emphasize "barely," keeps this lamentable and inequitable process in check. And now the people who have the most to gain from turning LA into San Fraqncisco's southern annex, (no offense to SF of course - I *LOVE* SF - I just wish it hadn't become so difficult for ordinary people to afford to live there. Seriously, I LOVE it there...) are trying to trick us into letting them do it.

I don't know how much of a chance this will have once the facts are out. Then again, California fell for the recall scam, so I'm not relaxing about this until the day it fails.

Go and read the rest, but when you're done, come back and let's talk about it. Do you think we need to repeal rent control (and if so, do you know how big of a dick you are?) Are you currently benefiting from Rent Control? And if you think Rent Control should be reformed, how would you prevent the sort of reverse urban blight that so adversely affected my beloved San Francisco?