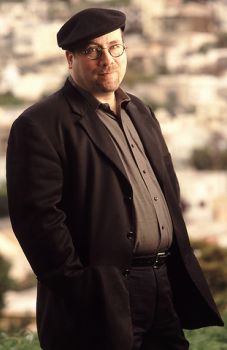 From New Hampshire to South Carolina, Democratic poll workers are noticing a trend grounded in passion and a thirst for new executive direction: record turnout.

Helping to drive that turnout are organizations like Declare Yourself and Voto Latino; and people like Craig Newmark.

You know Craig. He has helped you rent an apartment, find that vintage coffee table or maybe even some action on a lonely Thursday night.

I spent about twenty minutes talking to Mr. Craigslist about his role in the upcoming election, who he is backing and why he hopes Ari Gold calls him.

Craig, thank you for joining me and welcome to LAist. What kind of new projects have you been involved in?
Increasingly I’m doing stuff outside the boundaries of Craigslist and lending the site for other causes, like EveryBlock, Voto Latino and Declare Yourself. I'm not involved with EveryBlock at all, but I think they use the housing maps where apartments are listed on Craigslist. It’s all about the values I’ve learned from other people and sharing. I’ve accelerated that recently as the campaign heats up.

Who are you supporting for President?
Barack Obama.

Why?
First, the guy is an actual leader. People across our country want to restore American values in the way we run our government. He has inspired people to get together. That's what it means to be a leader. He's trying to change government to one in which people can run it. In the interest of fair play, I've asked someone from the Hillary [campaign] to contact me but haven't heard anything.

Why are you not supporting Hillary Clinton?
I do think she is a good candidate. I really do believe in her, but not as much as Obama.

So, you would support her if she is the nominee?
Oh, yes.

You were a big Bill Clinton supporter when he was President. What do you think of the former President's accusations he has lobbed Obama's way and his tone the last few weeks?
Bill Clinton has done some great stuff, some great things for this country, but he needs to check his facts. He has been wrong on a lot of things and the folks at Fact Check exposed a lot of the things he has said as wrong.

Are there issues that you are particularly passionate about?
The telecom amnesty bill, or whatever people are calling it, is a big issue. I wrote an op-ed on it that appeared on Huffington Post where I talked about how the telecoms have been caught putting themselves above the law by spying on people and the good work being done by the Electronic Frontier Foundation. This bill is bad for people, good for telecom.

How are you involved in the campaign?
I've been lending financial support to various groups and have been stepping up my personal support for veterans groups. I've also been attending board meetings of consumer groups. It's pretty boring stuff, but the boring stuff is the important stuff and I'm all about boredom.

And you lent your acting gifts to Voto Latino and Declare Yourself. Tell me about them.
Voto Latino is a great organization. By helping to register young people to vote, especially the Hispanic community, they are doing great stuff. They produced shorts with celebrities and actors stressing vote registration. I have a cameo in one of the shorts. Voting rights to recent Hispanic immigrants is an important part of the value system I'm talking about in terms of being fair to people. It has changed so much in the last seven years. Voter suppression has been made a formal part of government policy.

You're talking about the contested Florida result in the 2000 Presidential Election and the allegations of voter suppression in Ohio during the 2004 election?
Yes. The current administration has been caught. There are bad guys who are good at covering their tracks.

Are you aware of the Center for Public Integrity's recent report detailing the 935 false statements Bush Administration officials made in the run up to the war in Iraq?
Yes, in fact, I am on the advisory board of the CPI. I write about a lot of these things on my blog to help get the word out.

Voto Latino is trying to get young Latinos in the 18-29 age gap involved in the voting process. In the Nevada Democratic Caucus, the 18-29 age block accounted for the smallest percentage of voters in any age block, while the Latino vote accounted for 15 percent of the electorate there. Is Voto Latino and Declare Yourself having it's intended effect?
We're in a historical trend right now where people who have the Internet are trying to make things better. People who are 24 and younger are going on the Internet and getting involved and we are just making it easier for them to get involved. So, yeah, it's working. Voter turnout is higher than it's been in a while. Maybe ever.

Seeing as how you so convincingly played your role in the short, do you plan on switching careers?
I don't know, but I'm waiting for a call from Ari Gold. Tell him to call.

This is the first of the four part telenovela series. Though this one does not feature Newmark, he will be in episode 3, where Mr. Craigslist cameos as a marriage officiator to Wilmer Valderrama and Rosario Dawson's characters. It can be seen in the coming weeks on Voto Latino.

There are dozens of short Public Service Announcements on Declare Yourself, which range from hilarious, to aggrandizing, to mildly disturbing.