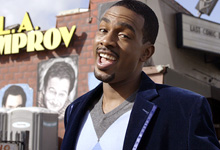 Attention comics, those who think they are comics, or those whose friends said they were "comedians" - here's your chance: this TUESDAY, January 29th, NBC's Last Comic Standing is having an all-day open casting call at the Hollywood Improv on Melrose starting at 9:00AM to show off their best 2 minutes of comedy. "Comics" who qualify and are 18+ (are they gonna strip?) are asked to come back Tuesday night to perform in front of an audience and TV cameras. Guest talent scouts will be Angela Kinsey ("Angela") and Oscar Nunez ("Oscar") from "The Office". Also on hand, all day, will be show host, comedian, and comedy impresario, Bill Bellamy, who will be working the line of contenders, doing spot interviews, watching auditions, and emceeing the first night. Full audition details are available HERE

Bill Bellamy had a chance to talk to us after returning to a chilly and snow-flecked LA from shooting promos for the show in Hawaii (aw gee that's tough). Bellamy's a busy guy, what with Last Comic Standing, which he's hosting for the second time, as well as his own appearances and his own stand-up comedy show on TV One.

Here's the full audio of the interview:

LAist: How is this season of Last Comic Standing going to be different than last season?

Bellamy: Last season was pivotal because we went international, we got rid of [the idea of comics making it] "in the house", we got back to the comedy which is what this thing is all about. I think that was a good move because more and more comedians are interested in doing the show because the (off stage) "reality-reality" part kind of killed it and now that's it's back to just being funny and about being the best stand-up I think that's more appealing to comics.

LAist: Since this show is open to just about anybody, amateurs, etc. can you spot if these inexperienced people have something or not?

Bellamy: Yeah buddy! I believe you can tell in the first minute if they're on the right path, by that two minute limit you know if they know what they're doing because it's not a lot of time in one way but it's enough time as well, you've got to get right to it, you don't have time to dilly-dally if you just have two minutes.

LAist: So a contestant can't have ten minute long story with a big punchline at the end? You have to have an approach, a game plan for what you're going to do with your two minutes, what's your advice?

Bellamy: Cut it down to two!

LAist: How is the international flavor of the show going to be made a reality?

Bellamy: Well we're hitting the cities, we're trying to keep the international aspect there because it really opens the show up to [a much larger] audience. I know we [in the US] like to believe that we're the only people around but Europe and Canada and Australia have a lot of funny dudes and girls out there as well.

LAist: So whereas the Superbowl is between just the AFC and NFC and the winner becomes the "world champion"... Last Comic Standing is really much more of a world championship show?

Bellamy: It really is on a much bigger platform.