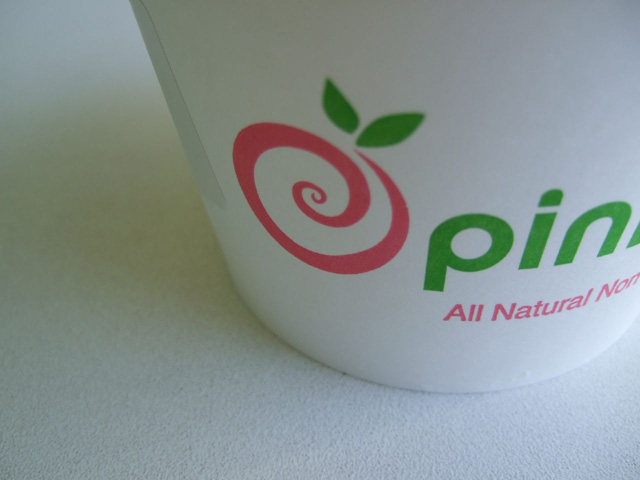 Every time I go, I quickly scan the faces on the street. Do I recognize anyone in the crowd? Is there anyone approaching that might recognize me? I enter covertly, head down. I try to get in and out as quickly as possible. Upon exiting, I scan the environs again. Who might see me? Who might pass judgment? Who might tell?

As I carry my "goods" home, I do my best to hide the logo and if anyone tries to meet my gaze with their judgment (always with the judgment), I avert my eyes and play dumb. I act like the lowly assistant sent off to secure the contraband and I'm just following orders, can't blame me.

When I get to my building, there is inevitably someone outside who sneaks a peek at what I'm carrying. Again, I look away. This is more difficult to manage because these people know me. They know what I'm about in our little artist's community where we support independent and believe in buying locally and are trying to convert our building to solar power. I'm an active member of this little enclave that we all cherish and believe in and so it shocks them, pains them, once they've learned my dirty little secret: I dig Pinkberry.

I know, I know. Admission of such a dirty secret is political suicide. I'll never run for office now and LAist might even take my Wine Novice column away. How can I be trusted where matters of taste and decorum are concerned? I should hate Pinkberry for a million different reasons: what it does to neighborhoods, the mom & pops it shuts down in its wake, its fake-yogurty ingredients that are likely very, very bad for me and its off-putting, sour flavor that foodies abhor and I, strangely, adore. I know and I agree and I held out as long as I could.

So politically correct am I about these things that I even denounced Pinkberry loudly at parties and social gatherings, agreeing with everyone's points, and swearing never to step foot in one. In principle, I agree with everything that is wrong about Pinkberry. Everything. I didn't even think about stepping foot into that slick, pop-yogurt mecca until one opened up a few blocks from me in Little Tokyo. Even then, I firmly believed I'd stay true to my first Little Tokyo yogurt love - the very yummy Cé Fiore. But even those with rock-solid beliefs waver in the face of temptation. 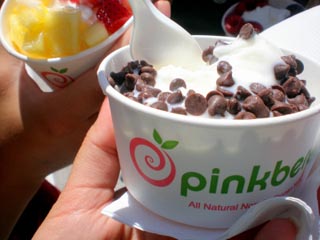 I'm not sure what got into me, what events conspired together to lead me down the Pinkberry path and into the front door. I hated the whole vibe, the smug little faces, the whole "we're totally corporate but trying to feel indie" vibe. Hated it. I ordered my yogurt (original) with pomegranate seeds and chocolate chips on top. Even waiting in line made me nervous: Who might see me in here through the windows? The LA Times building is just up the street!

I scurried home with my first-ever Pinkberry and tried it. Not brilliant, I thought. Not at this price. Kind of sour, I see what they all mean about the sour. But what a refreshing change from the sickly-sweet yogurt of ten years ago, when everything was faux vanilla and overly butterscotchy and simply too much. Overall, it was kind of meh. Interesting to try, but not the earth-shattering goodness that Pinkberry devotees shout about from every blog-rooftop. That, I thought, would be it.

Something curious began to happen shortly after that first hit. I craved it. I wanted more. I began scheming up reasons to walk to Little Tokyo in the middle of the day (or, you know, around 2pm when all the lunch crowds would already be gone, drastically reducing the odds that I'd run into anyone I knew) to get more. I didn't want to try different toppings. I didn't want to try the green tea base. I just wanted my same sour yogurt with my pomegranate seeds and chocolate. Wrong, so wrong, I know. But it's the truth. I'm beginning to see the raw wisdom in the "it's so wrong it feels right" cliché.

My last hit was two weeks ago and I'm trying to dry out, stay clean, move on. When others rave about Pinkberry, I remain silent. When hipsters sneer at the depravity of Pinkberry and those who are low enough to partake, I remain silent. I know it's very hip and very cool to hate Pinkberry. I know it's the socially responsible thing to do. But, well, I may fall off the wagon again.