Trapped in the Valley, Where's the Train? 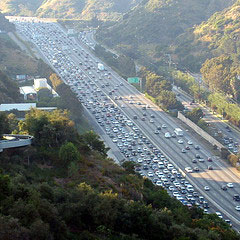 Two fairly large, but non-deadly crashes in the Valley, first on the southbound 405 in Sherman Oaks, then on the westbound 101 in Tarzana, snarled morning commuters today. Needless to say, traffic backed up to the 101/405 interchange which is the busiest freeway interchange in the United States.

This brings up the question: where are the alternative options to traverse the 8.5 mile Sepulveda Pass between the Valley and metropolitan Los Angeles?

There are currently three options, listed here from ridiculous to most ridiculous:

Actually, the 761 Metro Rapid bus is not that ridiculous. It's a comfortable rush hour ride over the hill. Travelers spread out on the long accordion bus, sometimes taking a couple seats to themselves. The line runs from Sylmar, down Van Nuys to Sherman Oaks and over the hill to UCLA. 40 minutes from Sherman Oaks alone, if there is a traffic back up, that timing extends. And speaking of timing, the 761 doesn't run late into the night, nor with frequent service compared to lines like the 720 on Wilshire Blvd. Two City of LA Commuter Express routes, two Santa Clarita Transit and and one Antelope Valley bus take the same route over the hill.

It's a good and tiring workout to use a bicycle up and over the hill, and a fun cruise downhill. Bike lanes line some of the Sepulveda Blvd. and the tunnel is not very accommodating, but has a bicycle button before you enter warning cars there is a bike in there. Such a ride is going to work up a sweat, so if you work at a place that is over 10,000 ft. (and built after the law went into effect), they are required, maybe only until recently enforced, to provide shower and changing facilities (additionally, if your employer employs more than 50 people and you opt of parking, that means extra money for you).

And if you want to spend most of your day getting to work, you can walk or run commute it. It's healthy, of course, only until you think about it being next to the freeway.

Monorails, double decker freeways, a train tunnel and dedicated bus lanes/freeway on-ramps have all been discussed. Nothing solid has come out of it other than nothing has happened. Until then, god speed and good luck. Here's to no more crashes on the roads and future planning -- stay safe out there.