Hiding the 101 Freeway Beneath a Park (Part I) 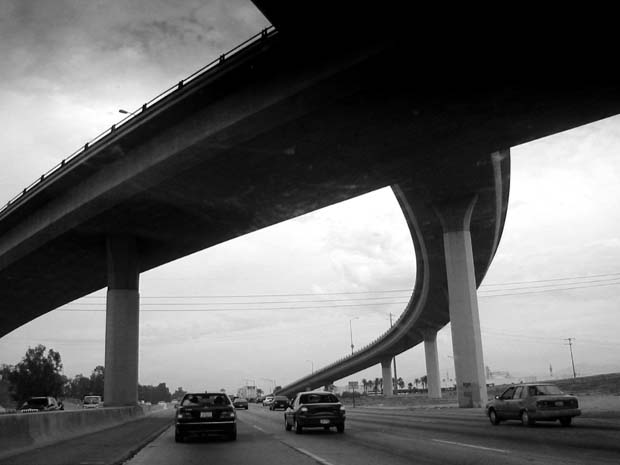 From the outside, it might look like putting on my ray bans and blasting Bill Withers Live at Carnegie Hall is a matter of taste, but in reality it’s a calculated effort for droning out the miles of billboards, concrete, and cars I drive through everyday. Amateur graffiti art and occasional, adjacent shrubbery are hardly enough to make up for what we have to sit through during daily commutes. This year, I’ve become well acquainted with the 210,110 and 105 freeways in between my home in Pasadena and my classes at Otis (which is a couple blocks from LAX).

Wikipedia explains that, as a partial implementation of the 1954 master plan, there are now 36 freeways in the greater Los Angeles area. We’re home to the first freeway ever, the first stack interchange, the first grade-separated HOV lanes, and the first fully-automated toll way system. I’m a strong believer in the idea that our surroundings and the way they are designed impacts the way we feel. Even those who claim they don’t see the value in design would have to agree that they’d rather work in an office with a window or live in a home in which the color of the rugs matches the color of the curtains. So if you’re at least partially with me on the value of the spaces we live in and look at, what effect do you think hours in traffic each week do to how we feel? Asides from the aesthetic harm of freeways, we also have to deal with noise exposure, pollution, lowered property values and divided neighborhoods. 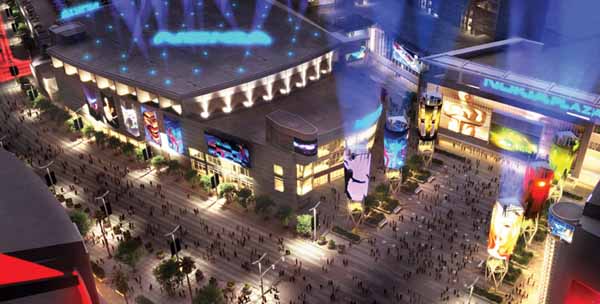 Head down to see architecture in our city developing around colorful lights and projections.

A friend of mine put it best: “Seeing what they’re working on out there, I feel insulted as an Angelino.” Sure, the project can make my visits to Lakers games more exciting, but a project built around lights and projections does nothing to define our people: it just gives us something somewhat interesting to look at. There are no implications of either who we should be ideally or even what we really are now as a city.
This reminds me of a quote by Alain Botton, regarding our architectural failures:

“There should be no need to focus our energies on preservation and restoration, disciplines which thrive on our fears of our own ineptitude. We should not have to feel alarmed by the waters that lap threateningly against Venice’s shoreline. We should have the confidence to surrender the aristocratic palaces to the sea, knowing that we could at any point create new edifices that would rival the old stones in beauty.”

In light of the “LA LIVE” project costing a total of 2.5 billion USD, it makes sense to hope the Gamble or Stahl houses are forever preserved in LA. Like I said, I don’t doubt that these developments might look cool by the time the project is completed, but thinking about the fact that such a large-scale project in our city does so little to define us or improve our daily lives causes me to echo my friend’s comment.

This is exactly where our 36 freeways and all the hours we spend upon them come into play. Taking on projects to improve our freeways, spending our time and energy on places that constantly occupy our experiential context, seem a lot more appropriate than what’s happening in downtown, like the “LA LIVE” project. We can’t do much to add to our existing freeways considering the laws of induced demand (the more lanes we add, the more the traffic), but the 36 that we have are clearly not going anywhere. When the freeway system makes up as big a portion of our lives in Los Angeles as palm trees, beaches, and French dip sandwiches at Phelipe’s, a commitment to beautify them is our responsibility.

Keep your eyes open for a follow up post about major freeway projects like those in Seattle and Barcelona, as well as complete details, covering all benefits or possible setbacks, on the proposed 24-acre park that would serve as a lid for a portion of the 101 in Hollywood. If you’re a Hollywood stakeholder, leave open this Saturday, the 26th, for a community meeting from 9:00 AM -1:00 PM for a chance to discuss it in person.

The meeting will be held at Selma Elementary School in the auditorium: 6611 Selma Avenue, Los Angeles, CA 90028.