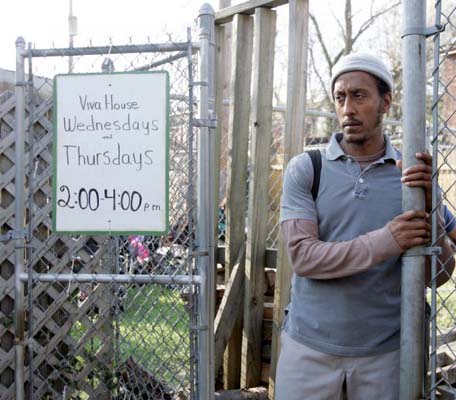 We continue our series of interviews with cast members of HBO's The Wire with Andre Royo. The actor born and raised in the Bronx plays Bubbles, a junkie/entrepreneur/informant who has been a central character to the show since its beginning. Royo, who recently moved to Silverlake, took time to speak to LAist about working on what he calls, "the most intelligent show on TV."

This season is about the media, what did you think when you heard that?
I found it interesting, after the fourth season we don’t question David (Simon) and Ed (Burns) no more. They obviously know what they are doing. Going in to the second season, I was like ‘why are we doing the docks?’ That turned out to be a great season. Before last season I was like, ‘why we doing the kids?’ After seeing how that went, now I’m like whatever you say, guys. Going into this season I was a little scared, there’s a little bit of pressure on us for a few reasons: 1) The Sopranos recently ending as well, that was a great ending, by the way, it took a day for me to realize it. 2) This is our last season and people are going to expect certain things to be wrapped up and certain things to happen. 3) Our fourth season was fantastic. It took our show to the next level. I remember asking Ed how are we going to make the show better this season and Ed is an articulate motherfucker, he told me “Better is the enemy of good. We are going to continue to put out a good show. Last season Ed got to tell his story, he’s a cop turned public school teacher, this season David who used to be a journalist gets to tell his.

I think a lot of people, including myself, were introduced to the show last season and then went back and watched the other seasons. What was it about last season that drew so many people in? Do you think it might have just been better marketing by HBO?
You weren't introduced last season, you were introduced from Season One, you just didn't want to watch. You said, here's another fucking cop show, right? You didn't realize what you were missing. Last season, being about the kids had a universal impact. Kids are universal. Some of the kids' storylines will be there this season.

I can't say it was better marketing, HBO has always been a great supporter of this show. It really was the storylines and those kids that had such a great impact. We've been in this world that they have created for some time now, and never had we seen our story at that level, you know with the kids. We have just shown you the drug dealers but how did they come to be? A lot of other people always wonder what made someone become a drug dealer, this is what last season accomplished. Before last season, I met the kids on the set and told them they had the opportunity to be apart of a great show. I said 'You guys can make it Fat Albert or "Once Upon Time in America.' Obviously they did an incredible job. When you see tragedy with the young kids, it pulls on the heart strings harder.

What is it about Bubbles that is so likable?
Truly believe that Bubbles character made a lot of people aware of how desensitized we are. We just walk right by homeless people, we never stop to think how did they end up here. We just think, they were irresponsible and it's on them and we go about our lives. Someone comes over to us asking for help and we just say I got this thing I got to do and keep walking. Since I've been playing Bubbles, I feel guilty for all those times I didn't stop to listen. They might be junkies, they might be homeless but they are human beings. The show's writing and my performance get the humanistic side of those people. You watch him and see this character, knowing about him and his back story and you root for him. You see everything he has been through and just hope that Bubbles makes it. I was in Barnes and Noble a while back and a woman came up to me and said I love your show, it make me look at homeless people in a different way. After seeing Bubbles, maybe we won't be so judgmental. I know I was the same way. I would pretend I was sleeping if I was approached by a homeless person on the subway. Bubbles is a genuine good person, playing him I think has made me become a better person.

How did you feel about last season's storyline where you were constantly being beat up?
Nobody was more angry about reading that than me. Every script I'd read it and think oh man, I am getting jumped again. Then when Herc (Domenick Lombardozzi) messed up and let me get beat up some more, fans got mad at Herc. Bubbles has been so helpful to the cops and the cops have been so helpful to Bubbles and now they are ignoring him and his troubles. People really just want Bubbles to get better. But for my character to clean up would be unrealistic. It's like a line from season one that really struck me, my character was trying to clean up and Detective Greggs said 'What am I going to do with a clean snitch?'

What would Bubbles be like if he was clean?
His motivation has always been to either get high or find ways to get high. If he were clean, what would he be motivated to do? You know it's like me being an actor and having this dream of succeeding as an actor which is hard to achieve but a good friend of mine and I were having a conversation about goals and failing to reach our goals and how difficult it is sometimes to deal with failure but something he said really hit me, he was like 'At least you know what your goal is, you know what drives you, for a lot of people they have no clue what they want to accomplish, they wake up everyday not knowing where they want to be with their life.'

Are you going to miss this show?
Of course, working on this show has kind of been like college. You know there's a lot of people together in the same place working, lots of familiar faces and then when the season is done, you go back home but you know you'll come back and see each other next season. Now, we don't have any idea when we might see each other again. I just moved to LA, Wendell Pierce lives out here too and we just got together and we were talking about just how hard it is to walk away from this show. Living in LA in the middle of this writers strike right now is hard, having that check come through was a nice thing to have. Looking back when I got the call to play a junkie, didn't want to do it, I was like 'Are we going back to Pookie (Chris Rock's character in New Jack City)? Little did I know I would be a part of the most intellectual show on TV. Playing Bubbles was so challenging and refreshing. I walk in to auditions now and think I can't do something that is so one dimensional. If I just wanted a check I would work a regular show. But it's really difficult trying to find something that will offer the same experience that The Wire gave me. I will definitely miss it, but five years is a long time playing junkie.

Why do you think the fans are so passionate about this show?
I think the fans are so passionate because it's real, it's the truth. HBO was smart in knowing that people love the truth. I think when people are introduced to something that is revealing they are addicted. Our fans love the fact that it isn't dumbed down. Its like a book and there are a lot of book readers out there who see the show and appreciate it how much it is similar to the book reading experience. Not to say that other shows are dumb, but there has to be a balance. We have that balance of entertaining and educational. We've created a socially aware show that hits on all angles. All the pieces matter. People might be catching on late, but at least they are catching on. I think our show has really benefited from technology, with HBO On-Demand and DVDs, its really helped our show tremendously. It's great when I hear people say I didn't watch the first three seasons than I saw last season and had to go out and get the DVDs to watch what I had been missing.

You mentioned you just move to LA, how do you like it and what do you like to do?
Yeah, I just moved to Silverlake. I was in the Bronx. The Bronx from Silverlake was a great transition. My wife just opened a restaurant in Atwater Village called Canele, you should definitely check it out. I hang out at Club Tee Gee quite a bit. I really like the little dive bars on the eastside, they remind me of the lower east side. I love taking my kids to the park. There are lots of things to do out here with my kids. I am enjoying it out here.