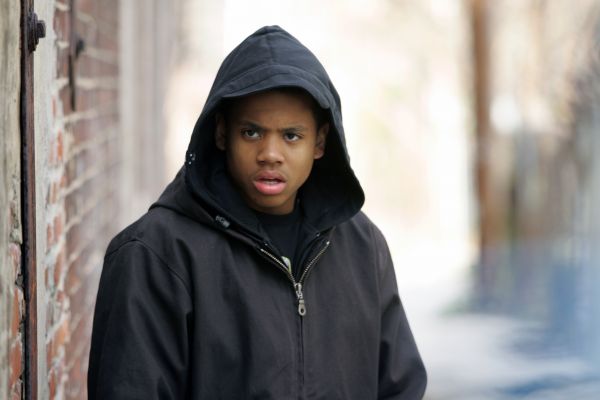 Sunday marks the return of HBO's The Wire. To get you ready for the premiere of the fifth and final season of a show that TIME, Entertainment Weekly, Slate and the San Francisco Chronicle have all called "The best on television" LAist has lined up interviews with three members of the show's incredible cast. Be sure to check back tomorrow and Friday.

Our series begins with Tristan Wilds, who we were introduced to in last season as young Michael Lee, one of the four middle-school students who were the focus of season four. Michael alongside friends Namond Brice, Randy Wagstaff and Duquan "Dukie" Weems were caught in the middle of Baltimore's dysfunctional school system and dangerous drug war. Regarded by many as The Wire's best season, last season watched the daily life of these four youngsters in the gritty Baltimore streets.

What can we expect from Michael this season? I think last season your rise or should I say fall was my favorite story line and cannot wait to see what the new season brings.
This season you will see that Michael is still just a kid. Despite what you think, he really isn't just a brainwashed killer.

Speaking of last season, what do you think it was about that season that brought in so many new viewers?
It was the kids, I am not just saying because I was in it. Seeing the kids in this hostile environment like that really had an effect on the viewers. It isn't something you get to see on TV every night. For so many people and so many kids, their life isn’t as hard as this life we portray. Last season you got to see why kids turn to selling drugs, you got to see the outcome of these kids' lives and why they ended up taking the path they took.

What do you enjoy most about playing Michael?
The way he is so inward. He is very quiet and to himself. He's not one of these kids who is looking to be the center of attention. He isn't flashy. He is really quiet. But like they say it's the quiet ones you have to watch out for.

What do your friends and family think of you as the bad guy?
My friends are always like 'you got to kill someone!' and 'what was holding the gun like?'. In the episode where I beat up Namond me and my mother were watching together and when she saw me htting him she got mad at me like it was really me beating him up, not my character.

Right from the start it was easy to see that Michael was different from the other kids, a leader. If swayed in the right direction, he has potential to do great things, what do you think him going the other way says about today's youth? Do you think there are too many people like Marlo and Chris who are spending time with kids and not enough people who can help them go the other direction?
There are too many people out there like Marlo and Chris to sway kids. There aren't enough guys like Cutty out there. As far as the path Michael took, even with positive influences around him, he went the other direction because he felt it was the only way he could get what he needed done. He didn't realize there were plenty of other ways he could have gone, being from Baltimore and seeing what he has seen, he thought this was the only way he could go.

What do you enjoy most about shooting in Baltimore?
The realness. You can't beat it. Everyone thinks it's so scary, like we are really chillin with people like Marlo and Chris. That's not what it is though, there are so many great people out there.

At a fairly young age, you have already accomplished so much and worked with so many great actors/writers/directors, what has been the most valuable advice you have received? What has the experience meant to you?
One thing that stays in my mind is something Ed Burns (the show's writer/co-creator) said to me on set. He handed me a nail. I said, a nail what this for? He told me, 'Whenever you need to build something you always need a nail.' You know, everything no matter how big began with something small.

Speaking of Ed, what's it been like working with him?
Working with Ed has been wonderful. He's like a second father. That guy is like a corner disciple.

In regards to fans, why do you think so many of us fans are passionate about this show?
It's a little bit of everything. We have that underdog TV show appeal. We don't get enough respect so the people who do watch and love it are kind of like fighting for it to get it the respect it deserves. I think people love how real it is. Yes it's a TV show but for that hour you watch you are living in it.

Is it going to be tough saying good bye to this show?
It already has been. After I shot my last scenes I had was with Jermaine Crawford who plays Dukie, we were just thinking about it like man this is the end. We didn't cry, but I remember saying 'I'm not going to cry' and he was like 'I'm not going to cry' and we kept going with that for a little bit. It was definitely emotional saying goodbye to everyone.

What's next for you?
Right now I am working on a movie, Secret Life of Bees. It's an adaption of the book by Sue Monk Kidd about the 60s, the racism and segregation of the time with a love story intertwined.

Has the Writer's Strike affected you?
Heck yes! Other than this project I just mentioned, I am not really sure what's next for me.