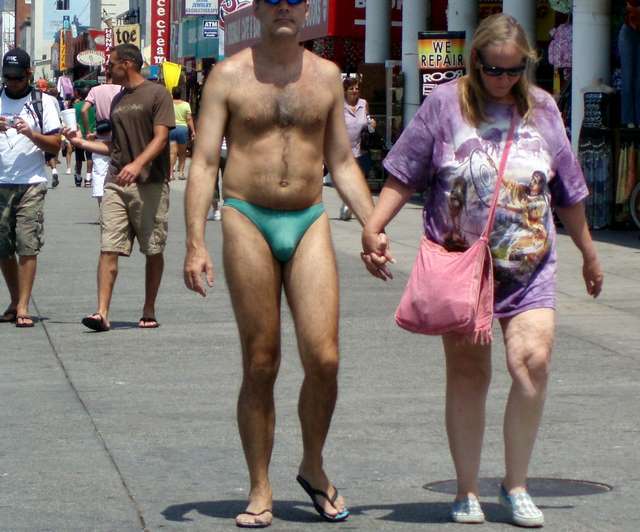 LAist is doing lots of writing about the top ten albums of 2007 or the top books of 2007 or even new year's resolutions. Unfortunately I am much more lame than all of them and not only can I not come up with my top ten recommendations for anything, I can't even come up with ten things that I like. Instead I will write up my wish list: the top 10 things I hope will disappear from Los Angeles in 2008. 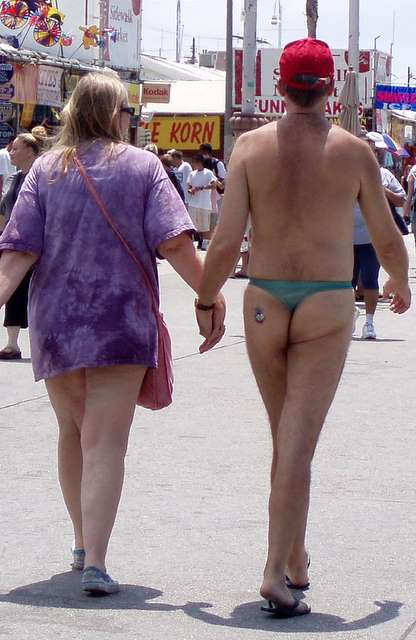 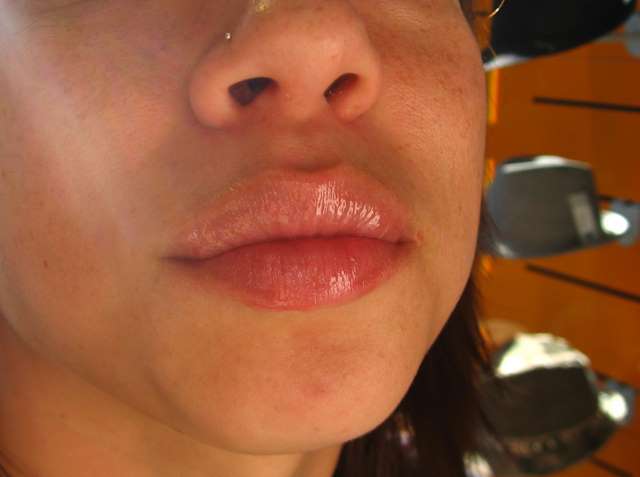 I tried on this Too Faced Extreme Lip Injector Extreme at Sephora and I should have saved myself the trouble and just kissed a hot frying pan because it had the same effect which was pain, burning, swelling, and me walking around 3rd Street Promenade looking like a complete moron. A few minutes after this photo was taken I ran into Howie Mandel and ended up on a buy.com commercial which is now shown regularly on Monday Night Football so I look like a fish with my lips all puffed out on national television and I completely blame lip plumping lip gloss for my embarrassment. 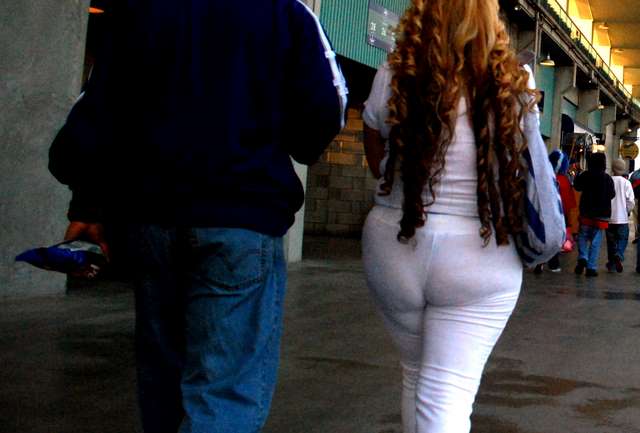 Back in June I put out a ban on white pants and they will not go away. In fact, they've somehow become thinner, tighter, and much less capable of containing thighs which I find to be distressing as lately I've been waking up in a cold sweat, jolted out of nightmares about drowning in a 200 gallon tub of cottage cheese. This has nothing to do with shape or size or body habitus, but more to do with the fact that I don't want to see what size panties you're wearing or that handprint that your boyfriend left on your ass when things got a little hot and heavy in bed last night. Some things are best kept between lovers. 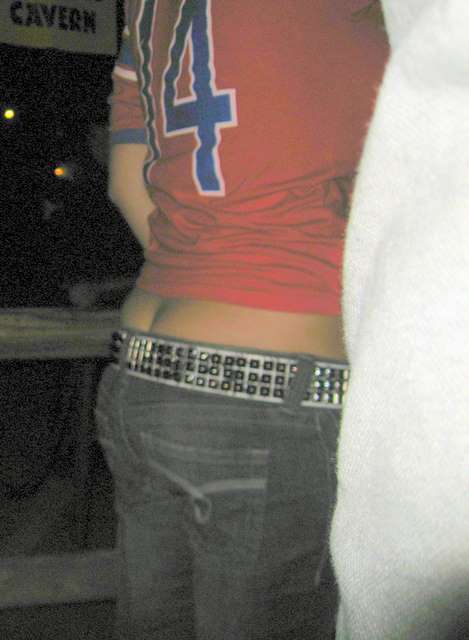 Okay, so the low rise jean allows for a little crack exposure when you sit down and it's come to be part of our daily routine ("did I turn off the iron, did I lock the front door, is my ass crack showing?") and the world has started to accept it. The ass crack that is visible when one is standing upright and walking around is a completely different story and reaches a new level of unacceptability which may be a sign of the apocalypse. The fact that any clothing company makes a jean completely lacking in crotch girth is one thing, but then there's the asshole who goes out and wears them in public and creates a new dimension of what the fuck. And that is this person. 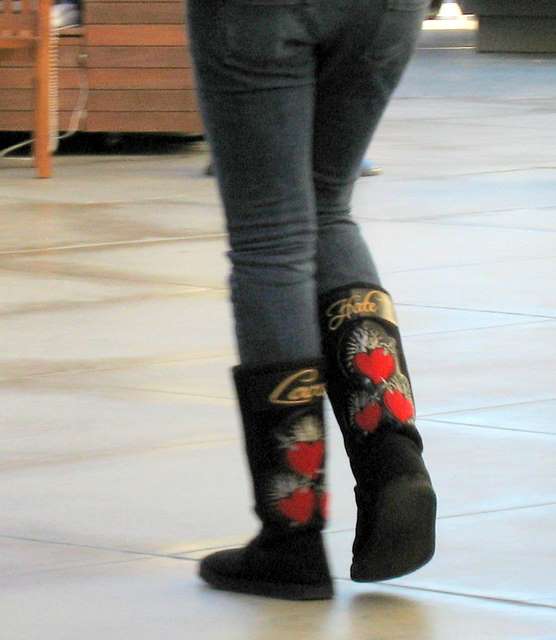 The Uggs with miniskirts are so rampant around here that I've almost stopped photographing them and accepted their existence as a fact of life, like paying $15 for parking or spam about C_ia_li_$. . Apparently there is a higher power that disagrees with my complacency, as in an act of smiting Los Angeles was blasted with boots with pictures and messages on them. For the most part they are opposite words, like love/hate or naughty/nice, which I just don't get. Do you love your left foot and hate your right? Or does your right foot just hate you? And what did your right foot ever do to you anyway? Why does righty deserve this sort of bias and prejudice and lefty gets carted around like a fucking princess all day? It’s not like you can rotate boots halfway through the day to make the other one feel better, so this odd and unfair bigotry is perpetuated for days on end. Pretty soon right foot might go on strike and then you end up walking in clockwise circles all day, which seems really stupid. 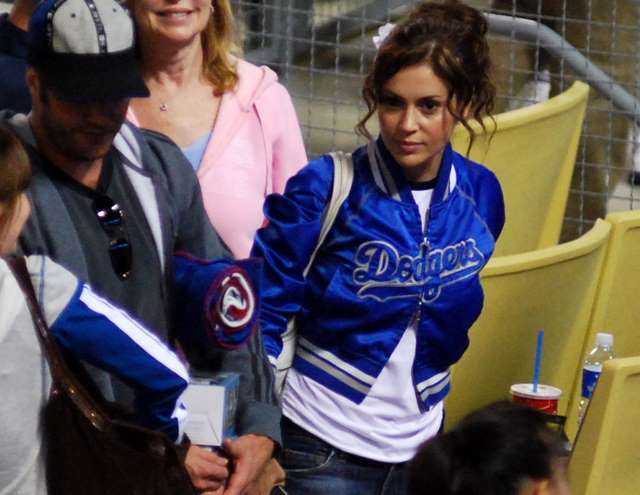 I'm really glad that now she wants to date a plumber or a doctor, and I hope this means she will go get her own plumbing show on basic cable because I am tired of her hanging around Dodger Stadium, or even worse, saying she hangs around Dodger Stadium and bragging about being a season ticket holder when in actuality she's never there. (I went to 42 Dodger games in 2007 and I only saw her at four of them and half the season she was banging Brad Penny so she should have been there just out of relationship duties). I've already gone off on the whiny teenage girl crap that spews out of her mouth and onto her blog and those lame clothes she "designs" and slaps on various MLB licensed logos to increase the price by 4000% so I think the topic has been close to exhausted, but seriously Alyssa, go find another team. Or a plumber. Whatever. 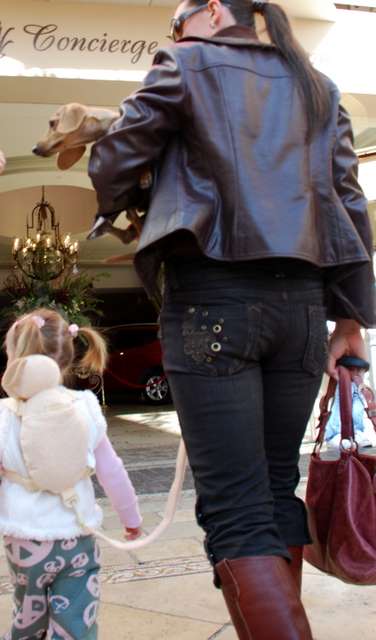 Why is it that every time I go to the Grove these days, I see kids walking on leashes and dogs being pushed in strollers? This role reversal confuses simple minded people like myself, and I'm hoping that for 2008 we can have a complete swapping of identities, so you can go pick up a baby from a cage in the pound when you feel ready for parenthood, and in the meantime give birth to a 4lb chihuahua because the condom broke but it's okay because you'd sort of always wanted a dog anyway so it was meant to be.

4) State of the panties t-shirts 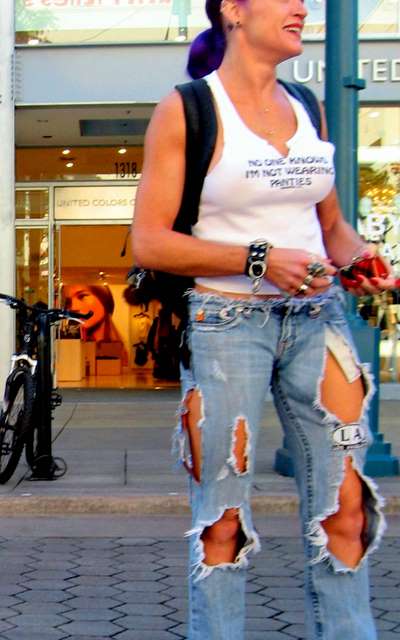 I do not need to know what's going on in your pants. It's bad enough when you try to show me by gashing ginormous holes in your jeans, but printing the state of your twaddle on a t-shirt crosses the line. If you choose to air out your poon-tang because it's had a bit too much activity lately, just keep it to yourself, there is no need to make a public announcement about what you do or do not have on, in, or around your cootch. I can almost guarantee that if someone wants to know that badly, they'll come forward and ask, which is a great conversation starter as it is. Why take this perfect little gem of an ice breaker out of the equation?

3) Children with suggestive messages on their buttcheeks 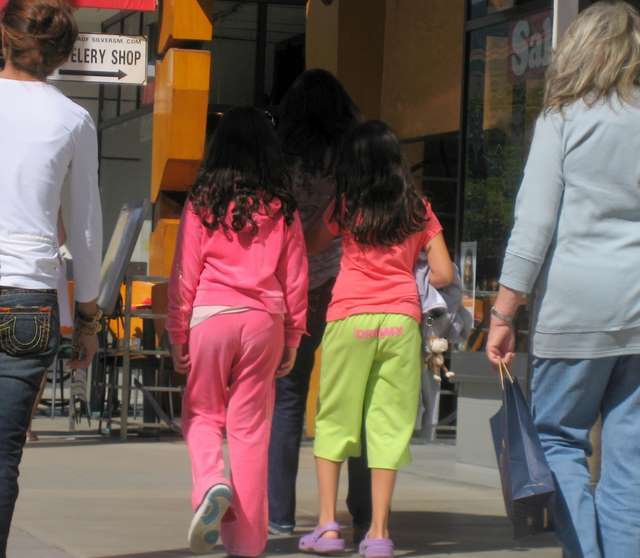 By "dreamy" I hope they mean "dreaming of 15 years to life in the sex offender ward at county jail" because there is truly no reason that any words, brand names, or other attention grabbers should be printed across the butts of 8 year old girls. Kids should have kid stuff on their behinds, like grass stains from kickball or dried up bits of mud from the mudpie factory or old dried up pellets of Play-Doh. They shouldn't have any adjectives or proper nouns printed there in any way shape or form, unless maybe it said "if you are looking at this you are a sick pervert" or "if you're reading this you're probably violating a restraining order." 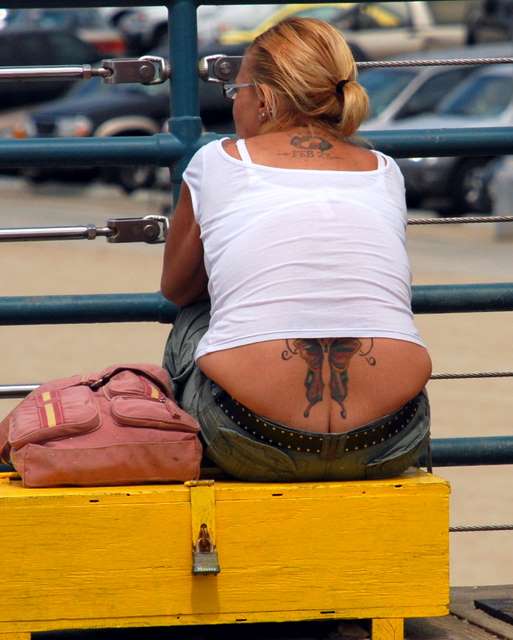 I hate muffin tops, but I hate them even more when they are decorated like a two-bit whore trying to make a quick buck. The muffiny overflow completely distorts the original design, and in the meantime my eyes do not know where to focus. Do I look at the flab that is being strangled to death by the top of those jeans, or the former butterfly now stretched out to look like a puddle of vomit running down into your asscrack? I don't like making those sorts of decisions and would prefer to not be faced with them at all. 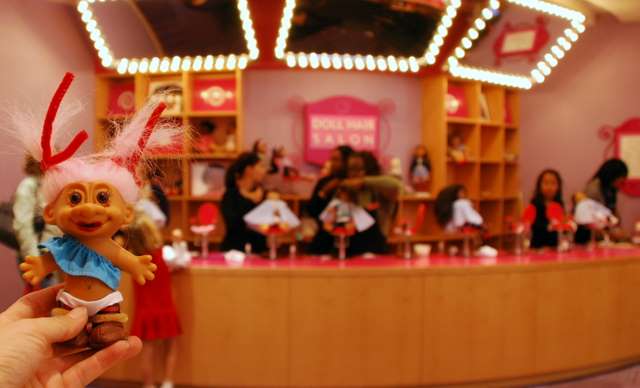 Everyone knows that American Girl Place gets my panties all up in a twist (not because it's printed on my tank top, just because I talk about it a lot), but there is nothing more upsetting to me than watching kids stand in line with their personal ATMs parents waiting for 30 minutes to watch some stranger style their dolls' hair for twenty bucks. I can think of no better way to create a generation of spoiled annoying little whiny brats than to show them that we pay people to play and imagine for us. This is the beginning of the end, people. If we do not fight to put an end to this practice once and for all, we could be destined for a life of asswriting-wearing, lip plumped, love/hate shoed, muffin topped, coin-slot bearing Alyssa Milanos that pay people to sleep with baseball players for them because they're too lame to do it themselves. Now is that what we really want for 2008?

All photos were taken by and are property of malingering. This means don't copy them off this website, claim them as your own, and then post them to other websites without my permission so that I come across them on fark.com and wikipedia and have to write a dumb letter about copyright infringement and photo thievery because I feel really stupid writing to people saying "Hey! That's my photo of a muffin top! It was stolen!" and I'd like to maintain one shred of dignity and respect. Thanks.