The Angelyne Quiz: How Well Do You Know Her? 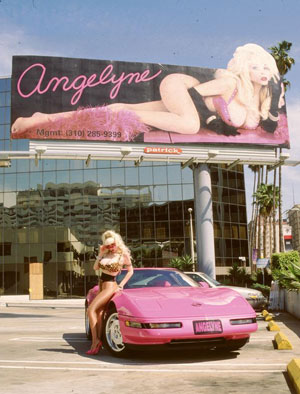 This morning on NPR's Wait Wait...Don't Tell Me!, outed CIA Agent Valerie Plame Wilson played a game called "You're a Blond Bombshell Who'll Do Anything For Attention." The focus of the three questions was LA's own billboard celebrity, Angelyne. Wilson failed miserably, as a CIA agent probably should, but how will you do? Answers after the jump...

Her intense expensive efforts to get work as an actress did pay off eventually, only about 15 years or so after her first billboard went up. In what movie role was it...

Obviously unhappy with the roles she was getting as an actress after awhile, Angelyne wrote a screenplay for herself. What was it called?

The high point of her career as a quasi-celebrity was probably when she ran for governor of California during the recall election of 2003. When Newsweek wanted to photograph her, though, she demanded what as a condition:

a) That first she be on the cover and second, the entire magazine be printed in pink ink.
b) That in exchange for allowing a single photo to be taken she be given a nice bottle of bubble bath.
c) The photo be printed in a Playboy style gatefold because "I don't look good, small"

Answers after the jump.

1. C. The movie is widely acclaimed by those few who have seen as one of the worst movies ever made. One internet reviewer said "Were I a weaker man, I most likely would have jammed grapefruit spoons into my eyes and then blindly flung myself to my death in oncoming traffic after watching this."

2. A. It's about an eccentric scientist who invents a supernatural power conferring brazier. Sadly, for America, I think, it remains unproduced.

Photo from her MySpace page where you can learn all about Angelyne and even buy signed photos and posters, etc.