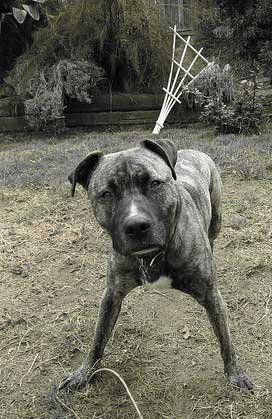 In Yermo, a small town east of Barstow in San Bernadino County, a woman was found Tuesday night lying in the street after she was attacked by a pack of Pit Bulls. She later died at the hospital.

After the mauling, the dogs ran to a nearby house. Deputies shot one dog to death when it returned to the scene and acted aggressively as paramedics were trying to save Caldwell's life, authorities said.

A second dog was shot to death Wednesday morning when it too returned. Deputies said it became aggressive as an animal control officer was trying to capture it. [KNX 1070]

One of the dogs is confirmed to be owned by a neighbor. If it is found that they knew the dogs had a history of violence, criminal charges could be filed according to police.

Rumors of a pit bull extermination bill in California have been floating around the internet for some time now. But that is a misinterpretation of Senate Bill 861 that went into effect in 2006. The bill, which the city of Los Angeles supported, gives local jurisdictions to place spaying and neutering policies on specific breeds of dogs. However, bills like SB 861 worry pet advocates that it paves a road for further restrictions on the breed while AB 1634, The California Healthy Pet Act, is widely supported by the animal rights community.