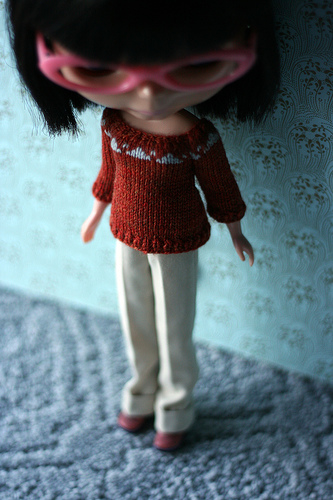 For a time, it seemed they saw Southern California as the land of rainbows, unicorns and constant, seasonless, unrelenting heat.

The gifts they sent me reflected these beliefs - bikinis that would embarrass a stripper, all manner of atrocious patterned terrycloth 'loungewear', big, cheap plastic sunglasses that they thought all the movie stars might wear whenever they ventured out of their fabulous mansions to mingle with the rest of us in the supposed endless summer of Los Angeles.

Finally - blue in the face and certain that this was in my best interests - I convinced them that it did, in fact, get cold in Los Angeles.

Not 'back east' cold, mind you, but cold enough that the idea of waltzing around in skimpy beachwear in January was, at best, ludicrous.

Thus began the parade of sweaters.

While my well-meaning family somehow managed to grasp that it sometimes got cold enough to actually wear a sweater in Los Angeles, but they never really understood fabrics.

I'd be sitting on the black and white tile of the bathroom floor - the only cool spot in the apartment - with the phone tucked under my chin not wanting to admit to Grandma that we were, in fact, having the tiniest little heat wave and I was, in fact, wearing shorts in December while poking at a heap of limp, steaming wool that I imagined might have been quite festive were I actually able to bring myself to touch the fucking thing.

"Yes - it does get cold here. Thank you so much for the, um, sweater. Next time, could you send me a cotton one,please?"

Then they'd assure me that next year I'd get a lighter cotton sweater and of course, they'd forget and I'd get another heap of Scandinavian-patterned wool that would only be comfortable atop Everest and I'd call and say thank you and then, in the dark of night, unceremoniously drop the thing into the Goodwill box around the corner, making it someone else's problem.

This year I'm spending the holiday with the family back in the land of ice and snow and now I'm paying the price for my years of unrepentant sweater-dumping.

It's well below freezing here, and, of course, every sweater I own is cotton.

I can't wait to come home.