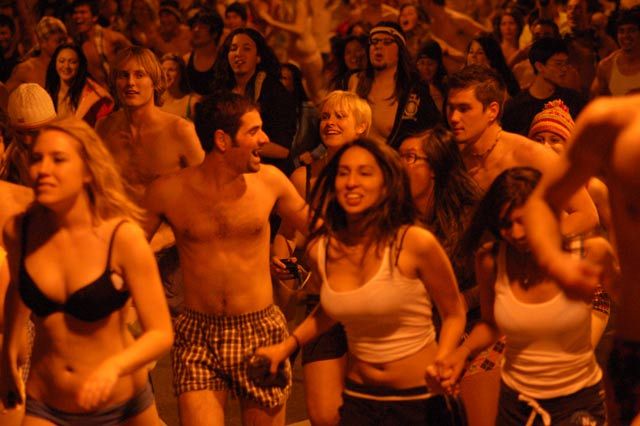 A sad week for LAist as they lose their trusted and amazing editor Tony Pierce to the LA Times, but what a blast his last week was. He shared his 25 Favorite CDs of 2007 and wrote a great review of just a good movie, No Country For Old Men. At UCLA, thousands of students celebrated the end of their quarter by running around campus in their undies (lots of photos in a two-part photo essay, one, two). That wasn't the only photo essay either: Joss Whedon/Mutant Enemy friends and Star Trek actors all joined in at the Writers Strike and KROQ's Almost Acoustic Christmas brought two nights of amazing bands that included Avenged Sevenfold, Linkin Park (Part I), Modest Mouse, Muse, Spoon and The Killers (Part II). Not only is L.A. a great music town, it has just been named the best city for bookish types. For those who are looking for something a little more active, American Gladiators are back (yes!) and if that's not enough, how about a Christmas gift of action and adventure?

Phillyist is counting down to 2008 (and really enjoying it - yes, in that way!), leaving them exhausted, disoriented, and irritable.

In New York, you better be careful how you wish people a happy holiday. Gothamist looks at a bunch of thugs that get in the holiday sprit by beating on those that wished them a Happy Hanukkah - and only in New York, a Muslim man helped defend the Jewish riders. Also on the subway, there's a new trend - poll dancing. First with women looking to score a $10,000 prize (they did) and a man that's shaking way too much while wearing way too little. They also looked at all the local names that were on baseball's Michell Report (the biggest being Roger Clemens getting 'roids in his buttocks), a found piece of graffiti history, and the reopening of the 2nd Avenue Deli...on 33rd Street off of 3rd Avenue! But why eat kosher food when you can have a drink called "Party Dogg" made by OG Nation.

Despite the onset of Christmas consumerism and festive cheer whatever the weather, Londonist still had time to admire some Brit art, shit art and sit-com art. Londonist was also the lucky recipient of a kind gift from a Torontoist regular, Panoramaist, who gave us an amazing view of the 02 Centre (formerly the Millennium Dome), created on a trip to see Led Zeppelin play a highly anticipated gig. And as the onset of Christmas shopping reaches a climax, hope is offered to anxious chaps wanting to purchase lingerie for their feminine lovers: a special

Bostonist took a deep breath this week--a lot of deep breaths, actually. They explored the smells exuded by the city's subway system and discovered many distinctive odors, such as Axe body spray, wet Uggs, and pee. The drivers of the subway might have been distracted by the fragrance of the system. One trolley crashed into another, sending a few riders to the hospital. In the meantime, a snowstorm descended upon the city, creating both beauty and havoc. But Bostonist braved the snow to see Joss Whedon, fellow writers Jamie Paglia and Rob Kutner, and fans--including a few young ones--speak out about the Writers Strike.