LAPD Leaves Body in Car at Crash Scene, Then Tows It* 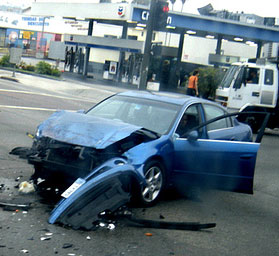 File this under "oops." After a Saturday morning solo car crash involving a son and mother in Tarzana on Ventura Blvd., fire and police officials failed to notice a woman in the passenger seat under the air bag after removing her son from the driver's seat.

The woman, whose identity was not released, had apparently been left in the car at the accident scene in Tarzana even as her son was taken to a hospital, police said.

Investigators began looking for her after family members reported that two relatives — not one — were missing, Officer Mike Lopez of the Los Angeles Police Department said.

"We conducted a follow-up to the tow yard, and we discovered the woman inside the vehicle," Lopez said. "She was dead." [LA Times]

It is still unknown at the moment if the woman died at the scene or later. We can foresee a new department policy coming out of this one: pop that airbag!

Photo of an unrelated crash by upeslases via Flickr