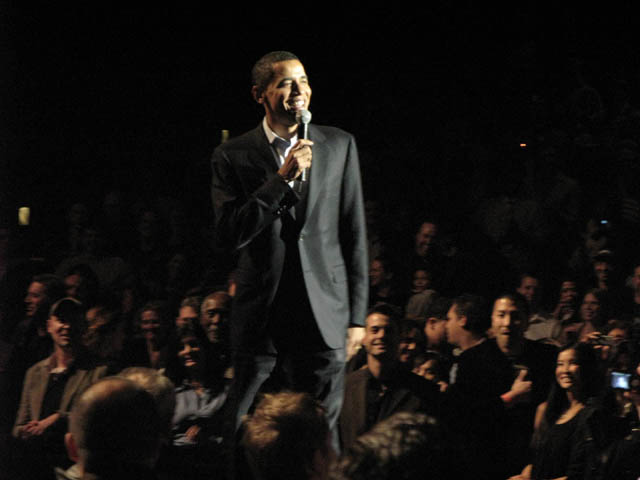 Approximately 5,000 people came to the Gibson in Universal City and paid between $25-$250 to hear presidential hopeful (and TRAILS the California frontrunner, if you believe recent polls) Barack Obama explain why he's in the race.

His speech brought tears from women, commanded several standing ovations, and even made this little kid near us shut his trap for 45 minutes.

Photo essay, insights, and some criticisms after the jump. 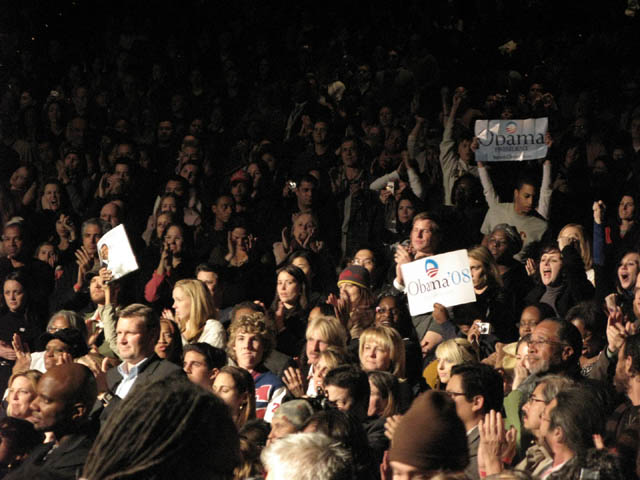 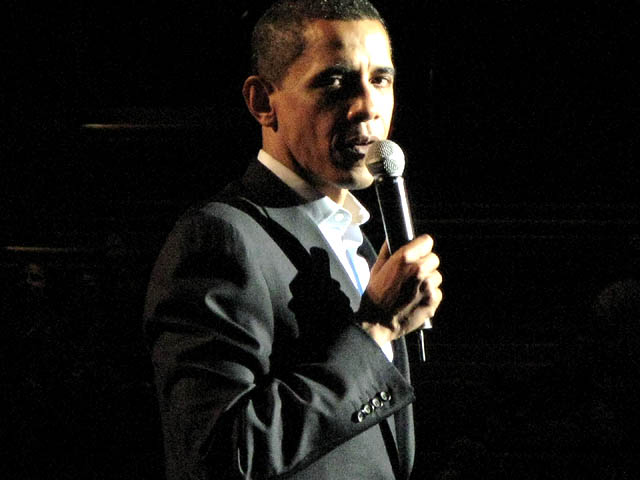 First things first. Senator Obama was as good as an analytical intellectual could be expected at a political rally. He's no JFK, but lucky for Dems, he's no John Kerry either. He has a wonderful story to tell, being a mixed-raced man born to an African father who immigrated to the US and a Caucasian woman from the midwest. 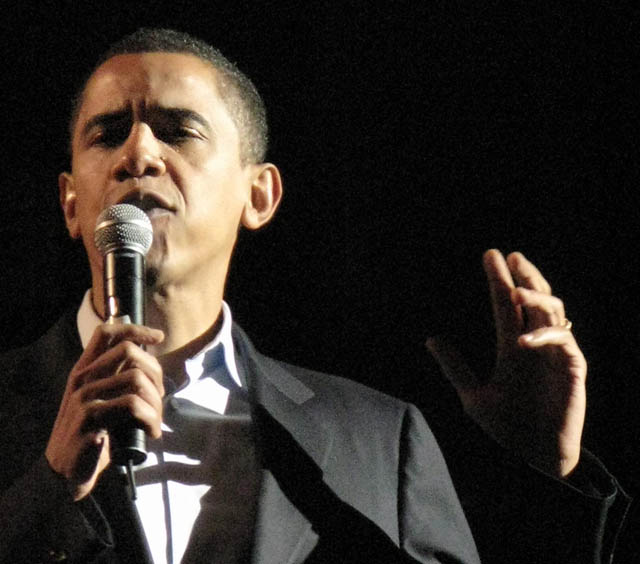 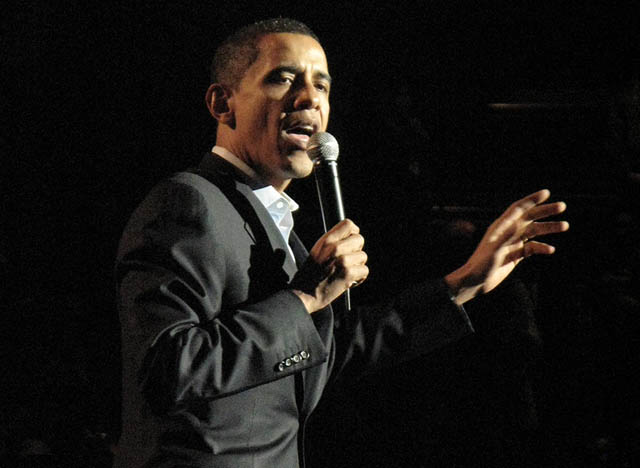 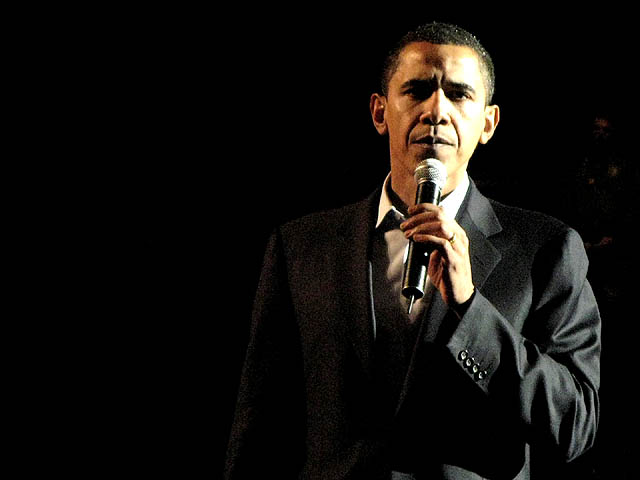 I was one of the 500+ people who saw Obama speak in West Adams in February of this year, and I wasn't the least bit moved by what he had to say. Maybe after his spectacular introduction to the national spotlight during the Democratic National Convention a few years back it's hard to provide an encore, but sorry Harvard law, that's what we want in our presidents: miracles. Here we are now, entertain us. Fill our heads with dreams and possibilities. Paint a picture with delicious words. Be smarter than the rest. Show us what you've seen. Tell us what it's like on the mountaintop.

Or if you're a Republican, scare the shit out of us. 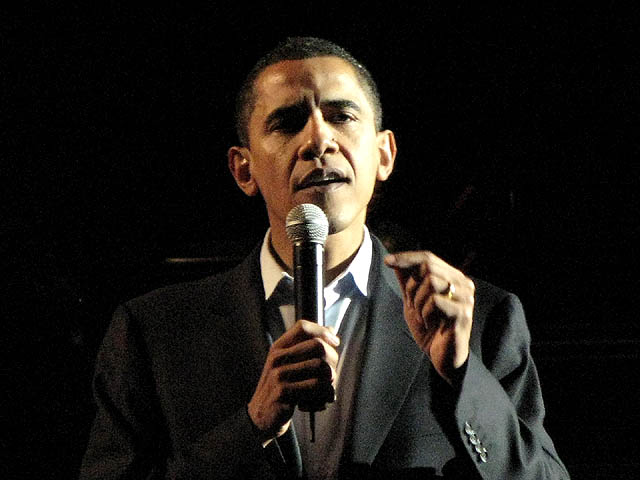 But is that movement because of a message of his that is getting out there, or is it because the Right are doing their best to smear Hillary? 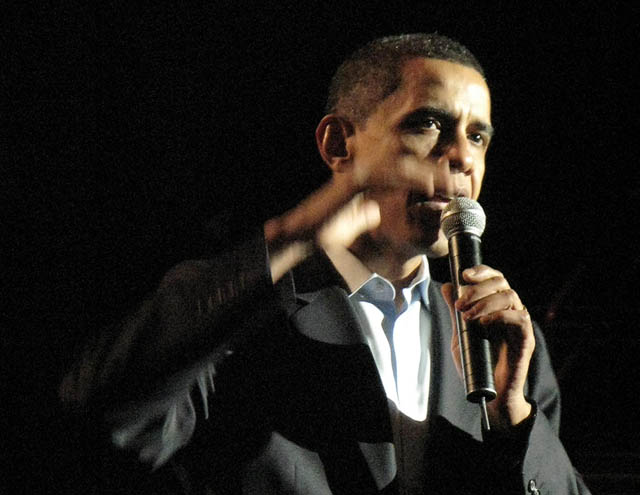 That question can get cleared up real simply if Barack really starts to let people know how he is different from Hillary. And unfortunately those examples were not primary in last night's speech.

Many of the speakers talked about how Obama was against the war from the beginning... but was he? And if he was, why wasn't he loud and pissed off when we went to war? True he doesn't seem to be the type of guy who gets loud or pissed at many things, but is that a good thing? Going to war over lies isn't something to get angry about? Seeing his Congress continually funding a war that the country doesn't believe in doesn't get him uptight? And if that doesn't what does? 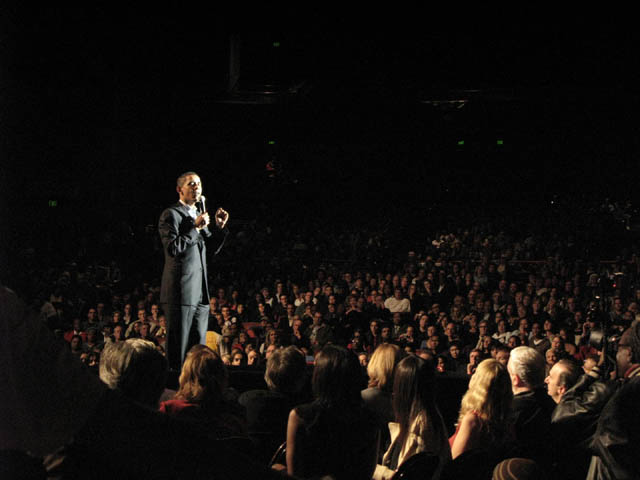 The crowd wasn't as critical as I was. They ate up every word. They danced to Ne-Yo, they rocked to the Goo Goo Dolls, and they came to the Universal pumped and ready to get religion. I don't think they got it. And I don't think this guy knows how to bring that religion. Sure he can move people at a long and drawn out convention and be the example for the Future of the party, but when do we get to see the Present?

If you look through YouTube and type in "Barack Obama" and browse thru the most recent videos you will see dozens of clips from when Oprah joined the Senator on stage in Iowa and South Carolina. If I was his campaign heads I would see a problem there. Oprah gets religion. Oprah gets hype. YOU GET A CAR! YOU GET A CAR!

But does the Candidate? Where's Obama saying "vote for me and YOU GET YOUR COUNTRY BACK!" Where's his immediacy? When is he going to stop being the hope for the future and start being the solution for the present? 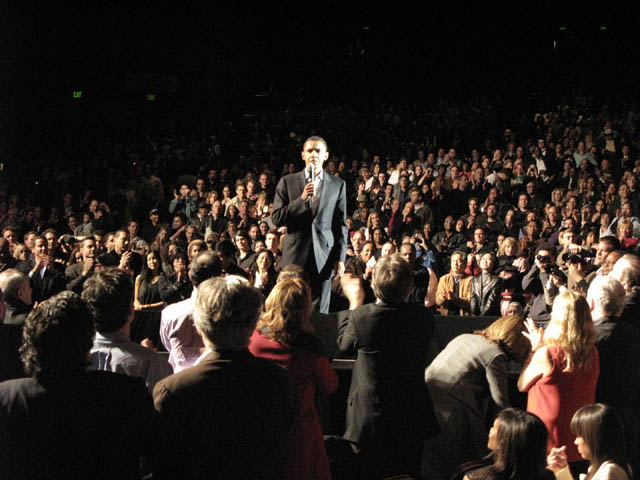 Which isn't to say that he's not a nice guy, and isn't a handsome young man, and doesn't have some good ideas. But if you are really going to put a huge banner behind you that says Change - when are you going to lead by example and change into a leader instead of an over-achieving college student? 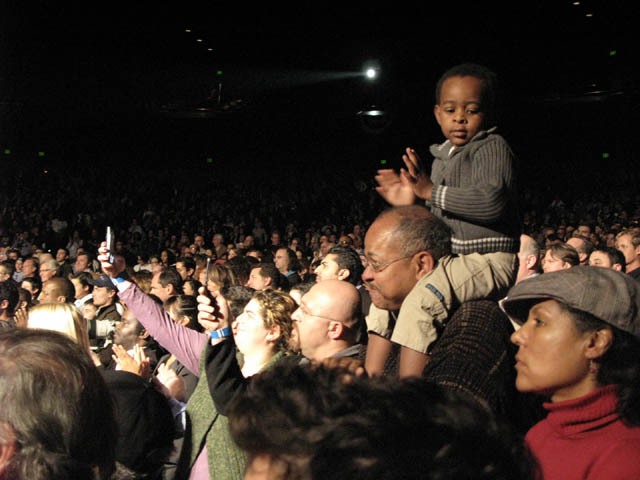 One thing I was impressed with was how they took 10 minutes out of the program to pass out little sheets of paper with telephone numbers of probable voters to those who hadn't received them upon entry. Everyone in the house was instructed to read from the script that basically said, "Hi I'm here in LA where Barack Obama is about to speak to thousands of people. On February 5 you will be voting in the primary election and I was wondering if you knew who you were going to vote for?"

They were not told to try to convince anyone to vote for Obama, just simply take down the info on who the person was leaning towards. Even though I'm simply a blogger, I was in the house with a press pass so I didn't partake in this huge, impromptu phone bank situation, but I overheard two guys behind me. They only were able to reach one person who said she was undecided. But still, in theory, if 5,000 people were able to talk with 4 strangers, that would have been a lot of information collected on that one night. And it got attendees used to what they might be asked to do as a volunteer. 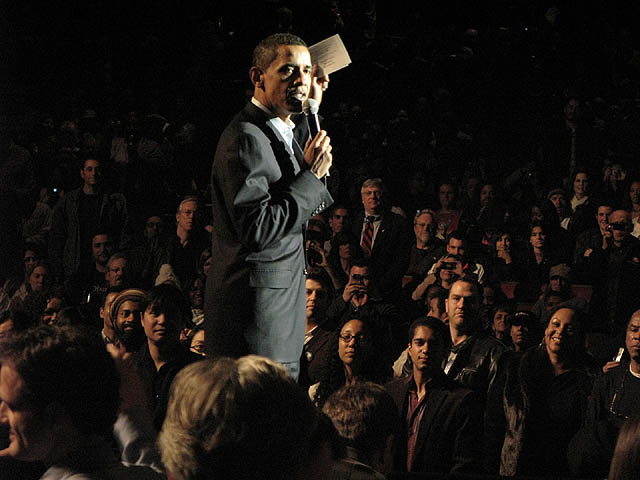 It was a new technique at collecting data, it was easy, and the fellas behind me seemed to enjoy the process. And in 10 minutes it was back to the show, so it wasn't much to ask from the audience. Expect to see these sorts of techniques spread among other candidates during their rallies. Without mobile phones something like that would have been impossible. 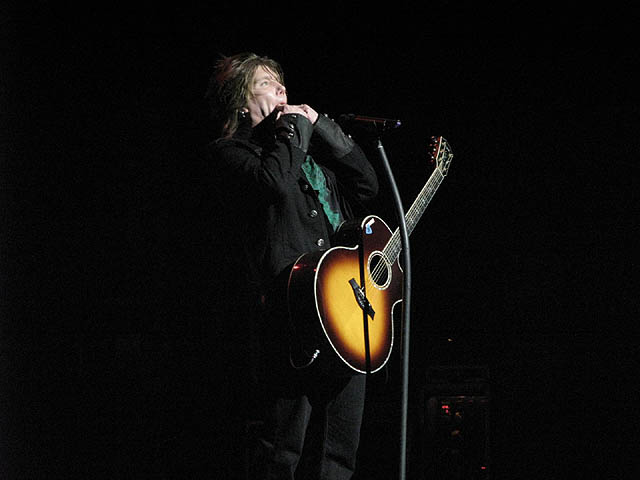 Speaking of once-promising, but now disappointing, the Goo Goo Dolls did their best Bon Jovi imitation. Yawn. In fact whoever signed them up should be fired. 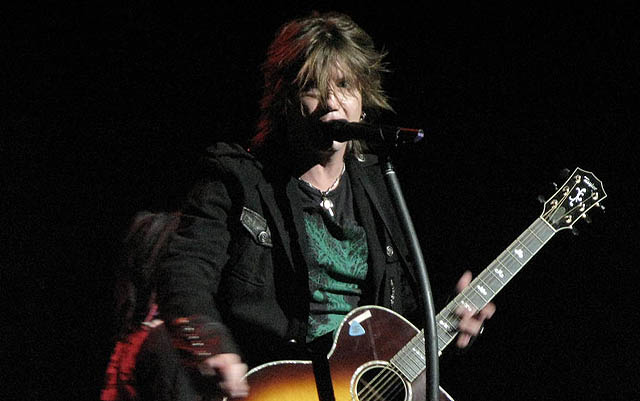 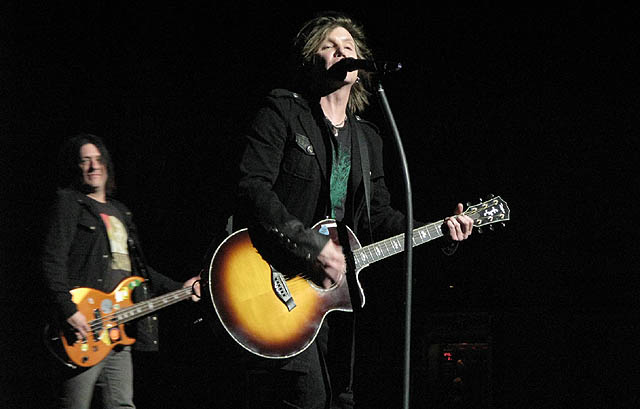 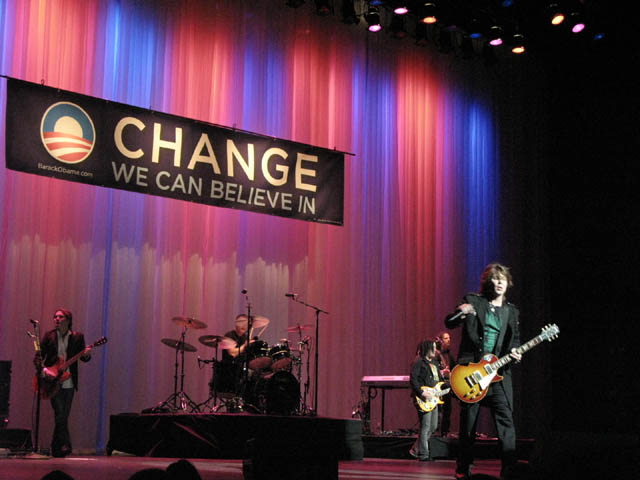 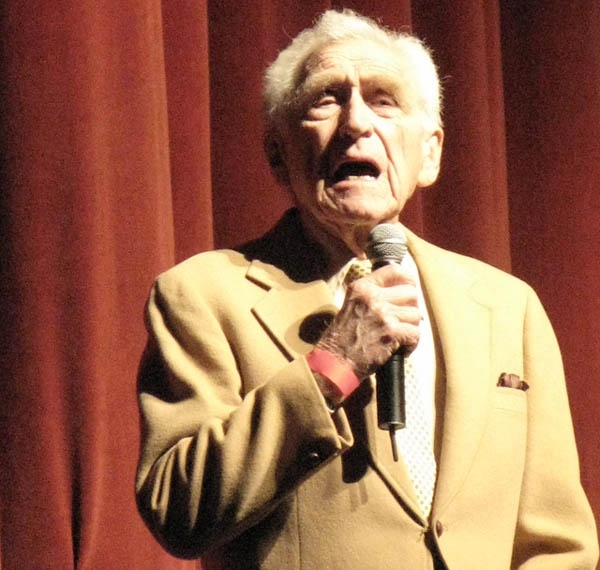 86-year-old actor James Whitmore was there and his speech was very moving. He talked about how he had played a lot of presidents as an actor, and how he served our country in the military and how he doesn't usually publicly support anyone, but how much he respected Barack. It was believable and touching. 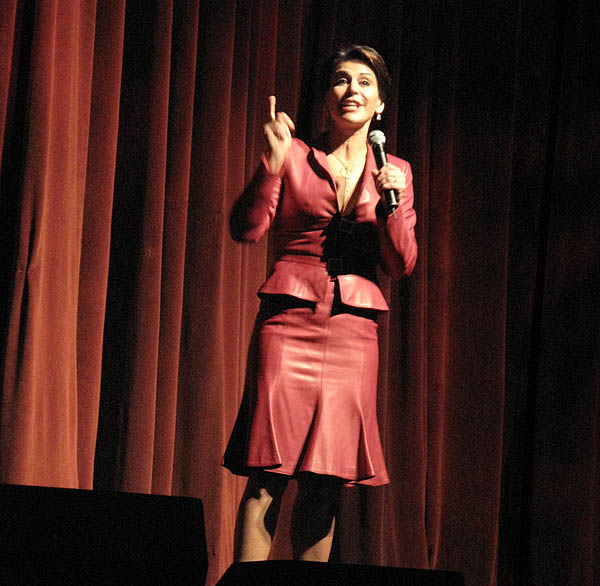 Newswoman and actor Giselle Fernandez shared how her parents were much like Obamas - of mixed cultures. But her leather outfit was wonderfully distracting so I don't really remember what else she said. Whoever told her to wear that should be fired, but first tell us where she got it. 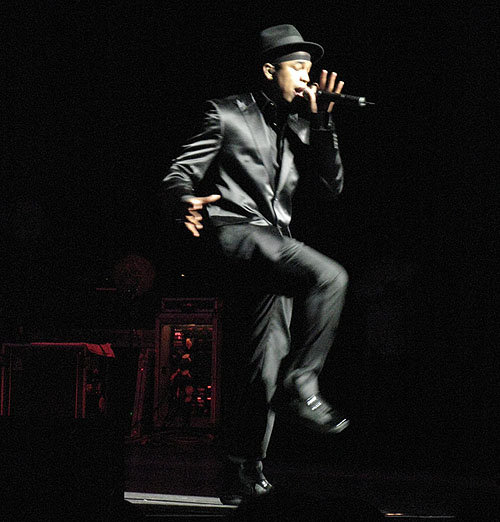 Ne-Yo danced around super cocky-like. The girls went nuts. Same old R&B act you've seen a million times - half way decent dancer with a better-than-average voice singing Top 40 tunes you'll forget about next week. But for this crowd he was perfect. But whaddup with the stocking underneath the sweet hat? Save the ghetto for the ho's, Ne-Yo. 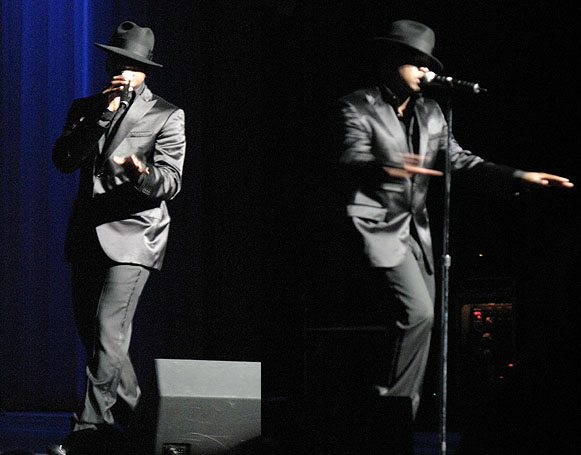 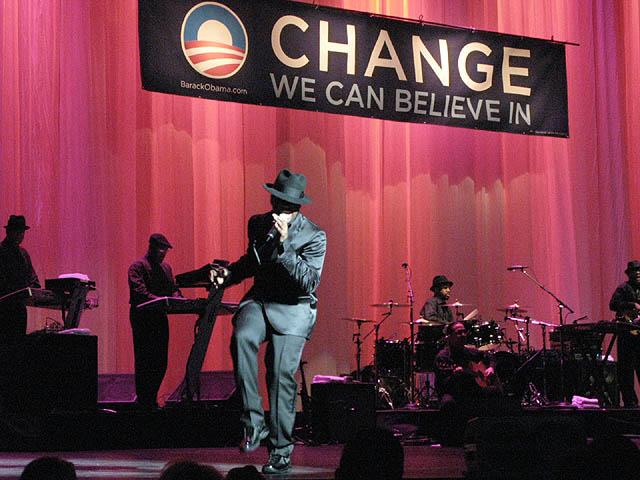 My only true gripe was the advertising. Take a look at this and tell me what you'd expect to see if you went to the Gibson last night:

Wouldn't you expect to see all of those actors and musicians on stage at some point? Who wouldn't want to see Jessica Biel, Taye Diggs, and Scarlett Johansson, especially if you laid out $250 to sit in the VIP section next to Arianna Huffington? But the only person off that list that made it on stage was Kal Penn.

So instead of drooling over the likes of Jessica and Scarlett we have to hear from the dude from Harold & Kumar Go to White Castle? Presidential candidate, please.

This is the sort of bait-and-switch sloppiness that gentlemen like Drudge and Hannity make their livings off of. And in light of Oprah freakin Winfrey hitting the stage with Obama, of COURSE people are going to be under the impression that these other actors will be on stage with bro, especially if you put it in the ad.

All photos by Tony Pierce for LAist