Giant Lines at the Obey Sample Sale in Santa Ana

by Tony Pierce in Arts & EntertainmentMiscellaneous on December 11, 2007 12:00 AM
Tweet 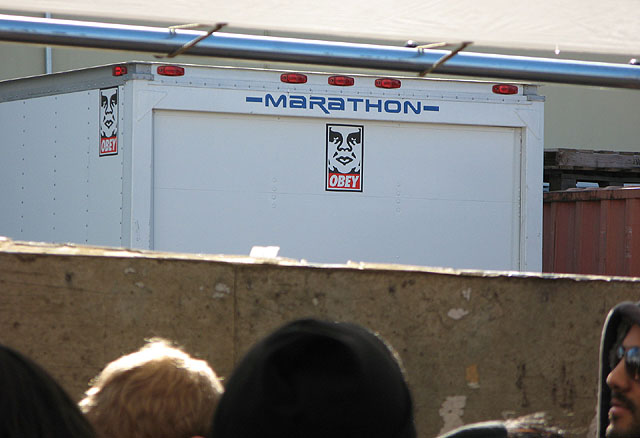 As soon as we arrived at the Obey sale on Saturday in Santa Ana I told my friend, "fuck this, I'm out." The line was longer than anything I'd seen outside Magic Mountain.

All you could see were high school and college-aged kids in hoodies and tapered jeans messaging their friends and they were probably saying the same thing I was saying, "fuck this." But my friend was determined. She had Christmas shopping to do and she had just gotten an Obey sweater for her brother for $70, she figured if she could get inside the warehouse she could probably get her entire family tshirts and sweaters for the price of that one item, and maybe get herself something cool as well.

So she pointed me to a taco truck, I got some grub, and we stood in the line like the kool kids and we waited.

And boy did we wait. 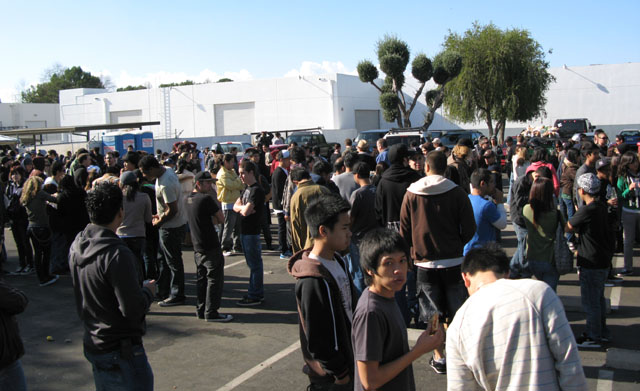 The big problem is I love Shepard Fairey and pretty much everything that he does. Sure his work has become a little popular now, but so what? In fact it's about time that some cool things have hit the mainstream.

The other problem is I have terrible taste in clothing, and I have no patience shopping. So since my fashion-forward friend was with me I figured that it would be a good place to stock up on clothes that I would wear for the next year. 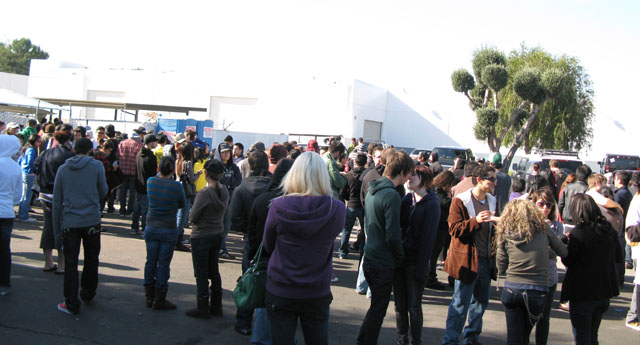 This was not the first time that Obey has had a sample sale. Indeed, this was their third such sale that I had attended. The other two, however, were real easy deals: you get there, you park, you stand in a very short line, you get in the warehouse, you take your time, and you ended up with $20 shirts for $5 and $100 jackets for $40.

Those deals were gone. This year people who showed up at 6am were just leaving the building at 11am. And because of the huge crowds, Obey had a system where right before you were allowed in, you were given a sticker slapped on you that had a time on it. The time was 30 minutes after you were to be let in. So as you shopped you could hear the dj say "ok, 2:15ers, you have two more minutes till you have to get out!"

Not the friendliest situation, but it kept the line going, and kept people focused. Little did you realize how fast 30 minutes could fly by. 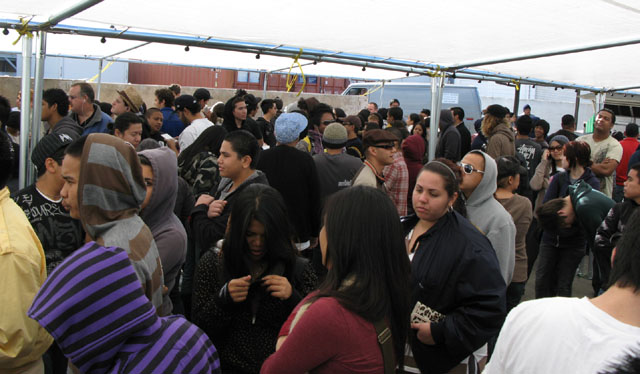 From all accounts, people had camped out on Thursday night (in the rain) and slept in tents. Then Friday night more people camped out, and many arrived around 6am. This caused lines that stretched way out of the parking lot and down the street of the industrial park.

When we arrived at 11am we asked the people exiting how long they predicted our wait was going to be, and they said, "wow, you're lucky, you should only have to wait two hours." Sadly they were wrong, we had a three-hour wait.

But once inside, to our amazement, there was still a good variety of designs to choose from, be they jackets or thermals, or tshirts. If you bought four shirts you got them for $8 each, hoodies were $35, and beanies were $10. Not bad prices. And it didn't stop anyone from getting at least a half dozen items. 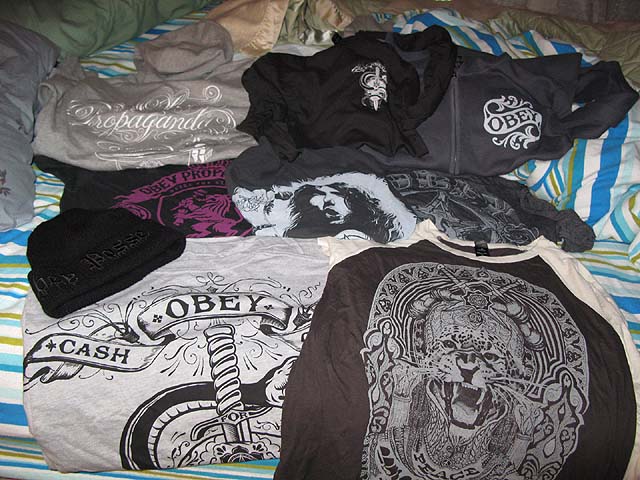 Checking out I asked the guy who seemed to be a manager how many people he thought had made it to the check out stand and he said, "On Thursday I printed out 3,500 of these [order sheets]. I had to make more copies today." Everyone who bought anything had one order sheet. So I said, "so 5,000 people came here so far?" He said, a little less than that. Maybe 4,000.

Was it worth it? I think so. The booty in the photo above cost me $160 out the door. That accounts for an embroidered hoodie, a nice thermal, a beanie, and several shirts.

Will I go next year? Probably not. They organized this as well as could be imagined. The 30 minute limit was brilliant. The selection was decent, the prices were reasonable, but my weekends are valuable. If they spread this sucker out to a three-day affair that might cut down on the crazy lines - but who knows, it might just mean that it's three days of mayhem instead of two.

Either way, I'm happy that people were waiting in line for good stuff instead of the new Puff Daddy cd or something.

My only real tip that I'd give Obey is that they should consider getting a stage set up in the parking lot. I don't know of any band who wouldn't love to rock out to an audience of young people WHO CANT LEAVE. In fact they would probably play for free.