Why No Country For Old Men Isn't A Great Film 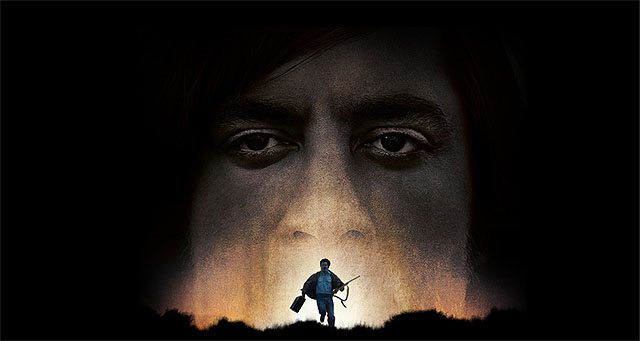 The Coen Brothers have made a very very good movie with No Country For Old Men. Josh Brolin is the tough guy that all men would want to be and women would love to come home to. Frenchy Javier Bardem plays one of the creepiest and vicious bad guys to grace the screen in a long time. Hell, even Woody Harrelson adds some comic relief for pretty much no good reason, but it adds a little depth to a film that's just about perfect for the first 90 minutes.

However, it falls apart when it matters the most. And for that reason it's a good movie, but not a great one. But worst of all, it could have been great if the filmmakers hadn't wussed out like punks, and ends up being the equivalent to a cinematic cocktease. Which is fine, if you are prepared.

More details, including MAJOR SPOILERS after the jump, so don't click the link unless you have already seen the film or don't mind a good film getting ruined. If instead you'd like to read a glowing review, may we suggest Josh Tate's earlier review on LAist here.

Everything in No Country For Old Men makes sense until the tension starts to build and the action gets hot near the end.

Then in the last reel Frenchy kills two of the most important people. But we don't see him do it, and we don't really know why they couldn't get away. Sure he's the baddest MoFo in the film, but Brolin is no slouch himself.

How can you create great characters and just let them die like that with no explanation and no death scenes?

It's a cop out. It's lazy film making. It's not worthy of praise. In fact, it should be ridiculed.

The sad thing is No Country For Old Men will probably sweep the Oscars because the acting is great and the direction is very good. The look of the film makes you feel like you're in a classic Western. Everything's right, except for the climax.

Are you really going to reward something with such a drippy bs climax? Is that how you are in your real life? Something makes me think you wouldn't stand for such a thing.

This year people WENT OFF on David Chase and how The Sopranos' ending was lame and weak and not at all representative to the whole of the great tv series. To allow the same exact thing to happen in what would have easily been a perfect film is ridiculous.

And no fair blaming the author of the original tale, Cormac McCarthy. The movie business has a long history of altering endings and plot lines when adapting screenplays. If what you are striving for is excellence in a film, you need to have an excellent ending. Not only is this ending soft, it's insulting to the audience, and a rip off for the characters who get aced by a compelling anti-hero whose best moments never get seen on the screen.