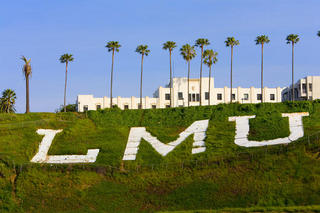 "I am going to shoot and kill as many people as I can until which time I am incapacitated or killed by the police," read an entry posted Saturday morning on the user-generated gossip site JuicyCampus.com, according to the Loyolan. LAPD investigators and university officials traced the posting to 21-year-old senior Carlos Huerta's computer and arrested the student near his campus apartment around 10:15 p.m.

The threat was never considered legitimate, according to Deputy Chief Michael Downing, head of the LAPD Counterterrorism and Criminal Intelligence Bureau. Campus activities continued as scheduled amid heightened security Saturday.

Video of KCAL9's earlier report and more on the investigation after the jump.

JuicyCampus.com was already garnering attention on campus after school administrators reportedly grew leery of some borderline posts, according to an article and an editorial published in the Loyolan last week.

The blog, founded in August and beta launched in late October, purports to operate "with the simple mission of enabling online anonymous free speech on college campuses."

Saturday's arrest marked the second time this week that the LAPD was involved in identifying a suspect linked to an anonymous Internet post threatening mass shootings.