Juliette & The Licks is a Can't Miss Tonight @ The Roxy 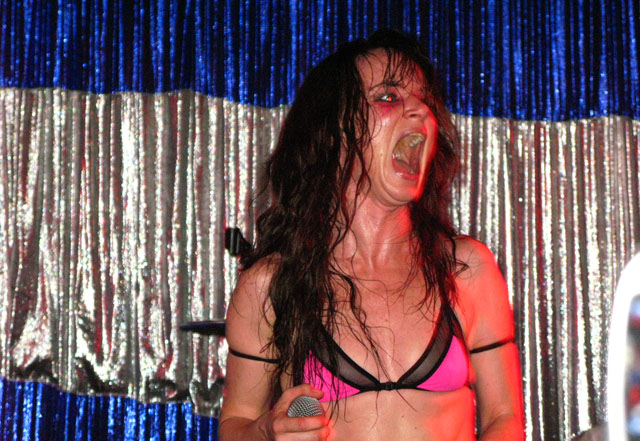 People have been asking me what's up with the Weekly lately and hell if I know. They do their thing and maybe new management has made them lose their edge, but maybe they're just getting olde.

Seems to me that once upon a time if someone like Juliette Lewis was in town to play a Saturday night show at the Roxy with a decent bill like Scissors for Lefty and Suffrajett, the Weekly would have at least made them a "Pick" but if you root around in their listings they simply yawn at this fantastic lineup that only costs $15.

What more does Juliette, an LA native, have to do for them to get their attention? She's nearly naked in her skin tight outfits. Her band rocks as hard as any of the college aged indie fucks out there with fancy hair. She crawls around, she screams, she jumps, she whips her hair around. Want her to bleed for you. DO YOU!?!? She just may!

Are you punishing her for being an actress? For banging Brad Pitt when she was a teen? For her religious beliefs? No one disses Beck for his.

But for some reason Juliette is treated differently and it's not just from the Weekly, it's from everyone. Her latest release Four on the Floor hasn't made any Top 10 lists that I've seen, even though it's raw and exciting and edgy and weird. Even though Dave Grohl volunteered to rock the drums for her. Even though it's basically a Stooges record fronted by a total babe. Sexism? Maybe. Or maybe rock critics today are too femme to get their heads out of Radiohead's ass and back into the rock. Should she apologize for not being Panic at the Disco?

Either way if you miss tonight's show at the Roxy you have no cred and no excuse and you're just one of the many lemmings of the Pitchfork era of meh. And you deserve the blandness that you accept in your white earplugs. Juliette and the Licks deliver the rock. You should be rejoicing instead of trying to figure out when Justice is going to "play" again.