The Hollow Trees Rock and Kazoo For You on Saturday

by Tony Pierce in Arts & EntertainmentMiscellaneous on December 7, 2007 12:00 AM
Tweet 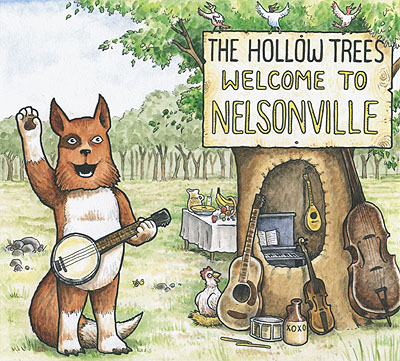 The Hollow Trees are the best folk band "for families" that you have never heard. By "for families" we mean little kids would love it as much as their parents.

Mixing Americana, folk, and pop, The Hollow Trees keep it simple enough for children with the G-rated lyrics. The music, however, is authentic, pure, and as good as anything you'd hear from your grandpa's best bluegrass records.

This year the Hollow Trees have gone from the backyards of birthday bashes to playing to the throngs at Stagecoach. Soon they will be releasing the followup to their eponymous debut. But before they get flooded with press requests, we snagged this exclusive with the head Tree, Gregory as he prepares to take his band to the Silverlake Independent Jewish Community Center on Saturday.

Full disclosure, Gregory Tree and I played in a band together, Chopper One, which was formed in the basement of an Atwater Village house, whose rumble was rumored to have caused the Northridge quake.

LAist: The best news I have heard recently is that The Hollow Trees are going to have a new cd coming out. But I don't see any songs on your Myspace or on iTunes. Did I just dream that there is a followup to your debut?

Gregory Tree: You did dream that... but your dream came true! That happens a lot with The Hollow Trees. We have a new CD called Welcome to Nelsonville which officially comes out next Tuesday. It's available for as a pre-sale at our website and we'll be selling them this Saturday when we play at the JCC. This is kind of a soft release - we'll have a new website, some videos, and a big release party early next year. 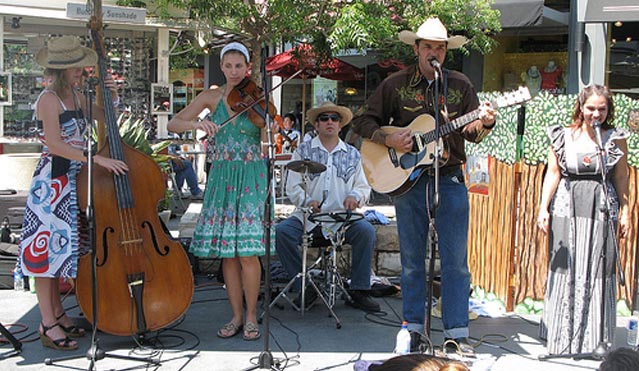 Part of my dream was that there was a mind-bending jazz flute solo on it. Tell me at least that part was true.

Oh yeah! You dreamed that this album gets deeper into some of the characters who live in and around Nelsonville, and one of those is The Night Owl. When the evening's celebration is winding down and everyone is getting ready for bed, sometimes the night owl starts playing a jazz flute coda through the tree tops. All the other animals sit back and listen, letting his playing send them into a dream.

Other songs about characters include "Ted the Talking Tree," "Ray's Music Shop," "The Nelsonville American Historical Band," and "Hootenanny." If you look at the map which came with the first CD, you can see where a lot of these characters live.

Your band has grown in size. One could say that others are jumping on the bandwagon
[rimshot]. But seriously, whats the positives and negatives to a larger group of musicians?

With our kind of music there is really no negative. We encourage singing and playing along, so the more people we have up there the better. Our group is really good these days. Our drummer Dave is rock solid and keeps the tempo right in line. Traci the singer is great at playing with the kids and dancing, plus she plays the jug and tap dances. Lydia is an excellent fiddle player and has great energy. We have a kid named Matt on mandolin who is 16 years old. He's a virtuoso and has a big future in the new grass world.

Of course Laura the bass player is really great. She wrote and sings a song for the new album called "My Favorite Friends" which is possibly the sweetest song ever written. On the CD, we also have harmonica, 5-string banjo, plectrum banjo, and some angelic backup singing.

Does the bigger sound scare the kids? Nothin better than crying lil 'uns!

Being a children's musician means learning to play through the tears.

Your oldest son Sean is now 5 years old. Is he demanding a harder edge sound now from what is probably his favorite band?

We have a band together called The Wrinkled Robots and he's very specific that we play rock.
But he likes quality music of any genre. We listen to lots of different kinds of music in our family, so I think he has a broad appreciation for strong melody, snappy rhythm, and sophisticated wordplay.

I always wondered if the song "Nelson" was in part a tip of the hat to the bully in the
Simpson famous for his "ha ha". Tell me this is true.

Nelson is a mythical creature who lives in a hollow tree in the middle of a magic meadow
which is surrounded by an enchanted forest just outside the town of Nelsonville, USA. He is
our friend and mascot and appears at our shows sometimes.

You distributed the first Hollow Trees cd thru various channels (local record stores,
iTunes, CD Baby, merch tables at your shows). Because your genre is so different than what most of our readers are probably used to, which of the channels sold the most cds?

CDbaby has worked really well for us, plus we've sold a lot through local stores and at our
shows. We've also sold a lot to libraries around the country through some distributers who
specialize in that market.

The Hollow Trees played Stagecoach this year. Was that the coolest show you participated in in 2007?

The Stagecoach experience was incredible. We loved it! But the gigs we look forward to are the JCC fair because it's sort of our home base and we have tons of friends playing with us, and the Topanga Banjo and Fiddle Contest (which we are playing again this year on May 18th) because you're in the middle of a western town and half the people are carrying guitars or banjos and everyone has a smile on their face.

Do happy little kids throw their diapers on the stage as a sign of approval?

Usually if they really like it they stick their fingers in their ears and make a sad face:-(

Kazoos! I see that if you pre-order the new cd you get a kazoo! Have you ever run across anyone who doesnt appreciate a nice group-kazooing?

Everybody loves kazoos! They were quite popular as musical instruments in the 20's, and I
think they're due for a comeback. We have a deuling kazoo solo on one of the songs on the
new record.

These kazoos are the highest quality made in the USA Kazoobie Kazoos with The Hollow Trees' logo on them. I'm really proud of them.