Dodgers Sign Jones to 5th Largest Salary in the Majors 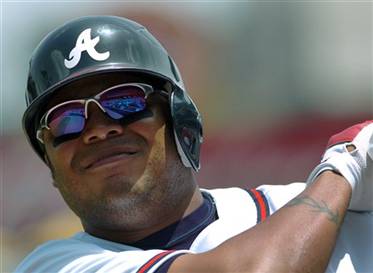 He's 30, he spells his name funny, when he's not injured he's tearing the cover off the ball, and he's got a gun for an arm. If he passes his physical Andruw Jones will be on the happy end of a $36.2 million, two-year contract to play for the Dodgers.

But should Dodger fans be happy about another outfielder, especially one who had such a miserable season last year (.222 batting average, .311 on-base percentage, 26 homers), particularly when the Blue Crew is stacked with youthful talent who seem ready to break thruw?


Snore. More of the same from the Dodgers, who inexplicably seem to be falling for the same mistake the Angels did, shoring up one bad centerfield acquisition with (arguably) another. Now, it's possible that Jones is merely coming off a lone bad season, and that he will bounce back; but for Colletti's expensive potential bust, we may add the caveat that at least the (perhaps rotten and stinking) fish he landed has a two-year expiration date on it, a far better deal than the five years Gary Matthews, Jr. and Torii Hunter have.

At least defensively, Jones will help. A winner of 10 consecutive Gold Gloves, no matter how quirky that vote can get, figures to be an improvement over [Juan] Pierre in center.

This is the contract I have been waiting for. Andruw's 2007 may have been the worst performance, relative to career numbers, by a player entering the final year of his contract in the history of baseball. I was curious as to what this would mean. In the end, I think that one year harmed his value, mainly because it scared away teams from signing a long-term deal.

My thoughts? Bro is 30. He has so much experience under his belt already. He played hurt last year (instead of just going on the DL like he should have), mainly because he knew he was going to be a free agent this winter. Defense is hugely underrated and you shouldn't yawn at having a 10-time Golden Glove winner in center. But mostly it means that the Dodgers are serious about getting it together right now, and even if it's a flop, it won't hurt them for more than two years.

And then there's always the possibility that last year was the fluke (as opposed to his entire career) and the Dodgers will be stoked that they took a chance on a star who had one bad year.