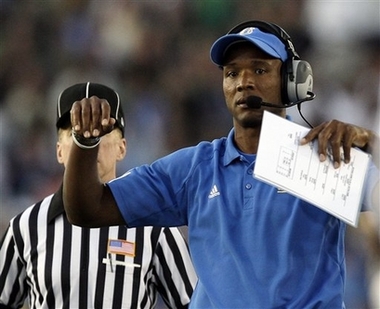 Before the questions are asked, please let me state for the record that I graduated from UC Santa Barbara, a college sports powerhouse that hasn't lost a football game since 1990, so I don't have a dog in this fight.

Having said that, I was a little surprised at how sensitive it appeared Bruin fans are about the firing of their head coach this afternoon.

Again, I am out of the loop, but when I see the popularity of blogs like Dump Dorrell "we're #4!", I was under the impression that Westwood was unhappy with their coach - especially in light of the fact that their crosstown rival has been enjoying a pretty amazing run lately.

So I have two questions for Bruin fans - and please let's try to keep it to them - are you happy that Karl Dorrell was fired today, and who would you like to see him replaced with?

There's nothing better than friendly competition, and in a major U.S. city with no pro football team, it would be nice to have more than one killer football team in town, so choose wisely.

To add a little love to the question, we will supply one lucky commenter with a cd 6-pack of new tunes provided by Filter, so if you register to comment, make sure it's a real email address so we can contact you if you're the random winner. Contest ends tomorrow at 5pm, so get to it.

Details about the cds after the jump...

Our friend Samantha Barnes of Filter is providing the cd six pack to one lucky participant who will be chosen at random. So Sam, take it away:

1. Grand Ole Party "Humanimals"
http://myspace.com/grandoleparty
San Diego trio Grand Ole Party spent their fall touring with Rilo Kiley and are hitting the Echo tonight (12/3) with Vampire Weekend to support their debut album, Humanimals, available on iTunes now and hitting stores in February via DH Records. With a wailing frontwoman on the drums, try to catch this SoCal act live, and enjoy an advance hard copy of the record.

3. MGMT "Oracular Spectacular"
http://www.myspace.com/mgmt
Hailing from New York, MGMT are quickly making a name for themselves in the indie world, having won the seal of approval from Rolling Stone magazine as one of the top 10 artists to watch in 2008, as well as by conquering a national tour with Of Montreal this past fall. Their debut full-length, Oracular Spectacular, is currently available on iTunes, and will hit stores early next year, but we've got an advance copy for you.

4. Sea Wolf "Leaves In The River"
http://myspace.com/seawolf
Sea Wolf is the moniker of multi-instrumentalist Alex Church, former member of Los Angeles indie-pop wonders Irving. He's been paying his dues on the LA scene all year, as well as hit the road with the likes of Nada Surf and Dangerbird Records labelmates, Silversun Pickups. The debut album, "Leaves In The River" is a must-own for any LA music fan.

5. Annie Lennox "Songs Of Mass Destruction"
http://www.annielennox.com
In a career that has spanned over 25 years, over 78 million in global sales with 33 hit singles, 4 Grammies, 11 BRITS, 5 Ivor Novellos, the Oscar, and 2 Golden Globes amongst other accolades, the legendary Ms. Annie Lennox has released her fourth solo album this October to show her stronger than ever as an artist.

6. Switches "We Are Switches EP"
http://www.myspace.com/weareswitches
Get ready for your next UK invasion from London-based quartet, Switches. They've toured with The Fratellis, hit up the festival circuit and even have a catchy-as-hell track "Drama Queen" currently featured in countless tv shows & advertisements. This EP is your official introduction before their full-length is released next March.