The cold weather - and holiday festivities - descended upon Gothamist. The Rockefeller Christmas tree was lit, Broadway stagehand finally ended their strike, and NASCAR decided to run their victory lap through Times Square. There were disturbing photographs revealing the working conditions in which many city manholes are produced and ninjas were also a hot topic, either robbing homes or entering into alibis. But the city was really rocked by how Rudy Giuliani's visits to his then-mistress (now wife) were billed to obscure city agencies - and how his wife used the NYPD like a taxi service. And on a final note, the New York Public Library faced some people (mostly Republicans) upset over an exhibit that includes mugshots of George Bush and his administration.

Big announcement for LAist this week: Editor Tony Pierce will be moving over to the LA Times to run all their blogs. Congratulations Mr. Pierce — the -ist community is so proud! Other big news in Los Angeles came in the form of the unfortunate shooting of Rodney King (he's okay though). In books, dog whisperer Cesar Millan presented his book by signing only, disappointing some fans waiting to hear what he had to say and in the fine arts, they saw the most offensive Christmas show. They also found that Hollywood industry parties are a bust, that sex is safer in a Nevada brothel than on a Valley porn set and that G4TV's Olivia Munn is as wicked cool as we all hoped she would be. And what's December without the Best of 2007 lists? DJs from KCRW start it off.

Phillyist got some family dirt but survived it with the aid of a little wine. They also checked out a great model train display, saw green, and brightened some kids' holiday seasons. 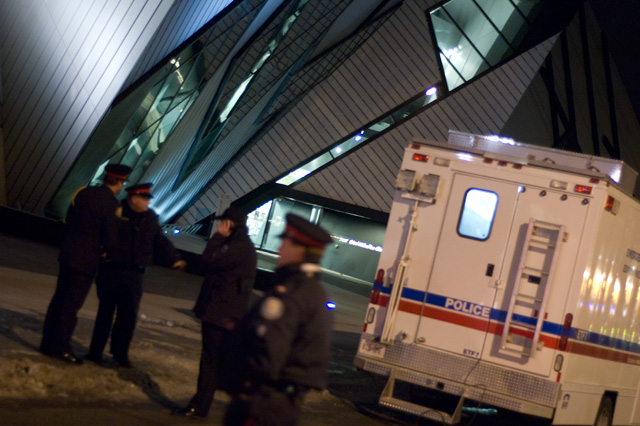 Torontoist's biggest story this week was the bomb scare mid-week at the Royal Ontario Museum, which they revealed to be the final project of Thorarinn Ingi Jonsson, a student at a local art college. Torontoist interviewed Jonsson the following day--the first such interview published anywhere in the city--two hours before he turned himself into police. They also wrote about the Workplace Safety and Insurance Board of Ontario's absolutely horrifying ad campaign, featuring impalings, scaldings, and just general unpleasantness. And then they wrote about sneaky fees businesses charge, even when they totally say they won't. It wasn't all scary, though: adorable t-shirts! offensive puppets! awkward/amazing vintage TV ads! a beautiful panorama of the city's new ad metropolis!

SFist finished off the month of November by seeing neocon talk show host Michael Savage become an unwitting anti-corporate hero, a possible (and inane) late-night pizza ban in North Beach, more cabs on city streets (at last!), and the awesome light of the Reverend Billy. And guess what else? What was once thought impossible became a reality: the 49ers finally won a game. Woo hoo!

Bostonist wants you to look at the image of Kevin Garnett and Paul Pierce. They sent a clear message that you don't mess with them when they took the New York Knicks and laid them the hell out. There's only one way to describe it--"carnage."In the department of culture, Bostonist talked to comedian Michael Ian Black and musician Tim Blane, and they caught a glimpse of composer Steve Reich. They sipped some creative coffee and symbolically devoured the Philadelphia Eagles--symbolically! Then they marked their calendars for the return of Harvard University's sex magazine. Last but certainly not least, they were riveted by a hostage crisis at Hillary Clinton's campaign headquarters in Rochester, New Hampshire. The crisis ended without anyone getting hurt.

Londonist was pleased to inform Londoners that should they be out and about then suddenly in need of a loo break, they can find a toilet by SMS. This could also be a useful quick escape route in case the faith schools debates looms too close - two schools having caused a lot of headaches this week. Meanwhile, London's most famous column had an intriguing Touch Up, Waterloo Station is feeling neglected and at a bit of a loose end now Eurostar has moved to St. Pancras station and the voice of London Underground Tube train announcements ('Mind the gap' etc) got sacked for disparaging the hand that fed her. We thought it was funny, but can see why her bosses would disagree.