Breaking: Karl Dorrell Officially Out of a Job 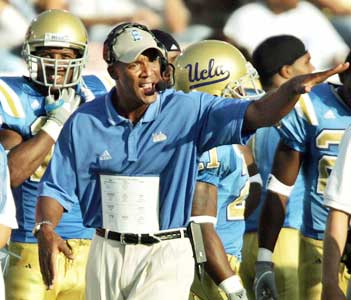 It's official: Karl Dorrell is out of a job, and after this weekend's 24-7 loss to USC, it's not a moment too soon.

Dorrell met with UCLA's Athletic Director, Dan Guerrero, this morning, after a weekend during which most UCLA watchers had predicted that Dorrell would be getting the axe very very soon. With a disappointing 6-6 record this season, and a 35-27 record overall for his five-year tenure, most Bruin fans will not be sad to see him go.

The LA Times is reporting on some of the candidates being considered for the position:

Boise State Coach Chris Petersen is said to be the first choice of Athletic Director Dan Guerrero, with Texas Tech Coach Mike Leach and former NFL coach Steve Mariucci considered among the other top candidates. Representatives on behalf of the UCLA athletic department have contacted all three, multiple sources said.

There will be a news conference at UCLA later on this afternoon. Dorrell's contract wasn't set to expire until 2011, but a buyout clause will pay him around $2 million over a two-year period. Dorrell said in a statement this morning:

"I am proud of what the program accomplished during my five years, especially in the areas of academics, citizenship and recruiting. I think a great foundation has been laid and I will be pulling for the young men I recruited into the program to be successful in the future.

"I want to thank all of the players, coaches and staff for their efforts in building our program. They always worked hard, both on and off the field, no matter what adversity we faced, and I want them to know how much I appreciate them."