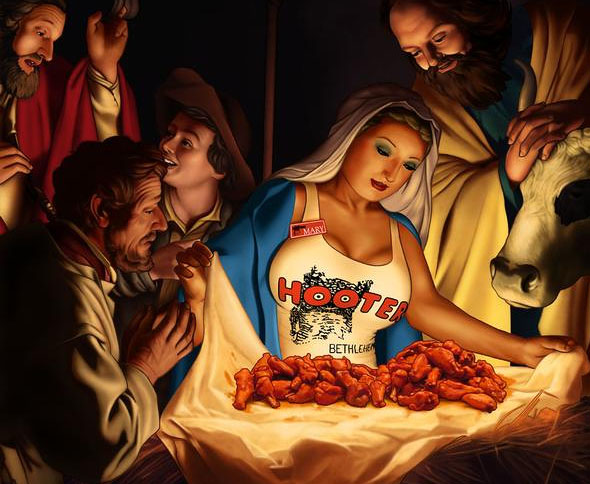 It's sexy, it's sacrilegious, it's scandalous, and it's just in time for Christmas. LA's hottest art curator Lenora Claire has done it again with a new collection of saucy art pieces guaranteed to get folks hot and bothered.

Mixing Christmas themes with ample female breasts and featuring the work of Austin Young, Kitten Natividad, Buff Monster, and our fave the Gay Bigfoot, among others, Claire chose not to rest on her laurels of the hugely successful Golden Gals Gone Wild collection of this summer, but instead opted to pump up the volume with a new group of art that's poised to get viewers hot under the collar.

We were lucky enough to interview the Los Feliz curator who will present Merry Titmas at the World of Wonder gallery next weekend. Claire answered all of our hard hitting questions including the old stand-by "are those things real"?

LAist: The painting of the Holy Mother wearing a Hooters tank top will clearly offend a lot of people. Especially because instead of the Messiah in the manger, it' s a couple dozen hot wings. When exactly did you sell your soul to the Devil?

Lenora Claire: I've always said art much like breasts should be in your face. Since this is a show about art and breasts I started thinking of taking something as classic as a typical nativity scene and giving it a pop twist. I really feel that is the Virgin Mary found herself knocked up today that she would have to go work at Hooters to support the baby Jesus. Like everything I do there are high brow and low brow elements. It's all about subversion.

Sure on one level people are going to be shocked but that is what gets them talking. You can either get off on the humor of it or the bold feminist statement. Or you can be offended. My goal with this show is to stimulate and titillate and I know I've accomplished that. I'm just lucky I was able to wrangle my friend Ed Mironiuk in to drawing it as it would be less impressive if I was left to expressing myself with my finger painting skills. 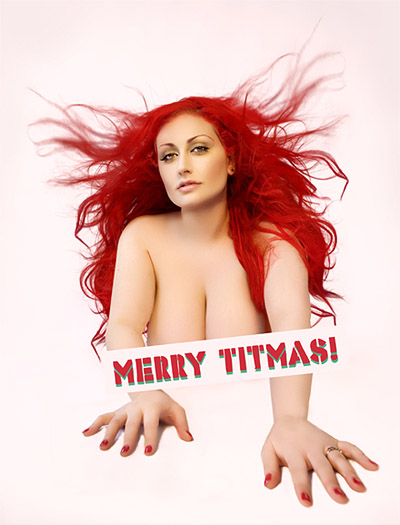 Titmas? Really? Why do you hate Christmas? Don't you know that makes the baby Jesus cry?

Lenora Claire: As a Jew I have a pretty warped fascination with Christmas probably stemming from the Pee Wee Herman Christmas special I was obsessed with as a child and Divine going apescat over not getting her cha cha heels. You see everything I know about Christmas I learned from TV. In my head Christmas is all about watching a super intense coked out Grace Jones singing "Little Drummer Boy", shooting your eye out with a BB gun, and throwing a fit if you don't get the fuck me pumps you want.

You curated this show and the Golden Gals show. Clearly you are obsessed with sex. Especially boobs. Therefore are you offended when you catch men staring at your giant breasts?

My father is a psychiatrist so I could get all Freudian and say we're all obsessed with sex. The Golden Gals show was about giving a face, all be it a wrinkled making the "big O face" to the concept of senior sexuality. This show is about exploring the power of the boobie. It's also a charity event to raise money for breast cancer. It's true that I am a first class Russ Meyer level buxotic so perhaps that explains my fascination. I'm never offended when men or women stare at me. I'm only offended when they pull my hair to see if it's a wig.

Through the work that you collect and curate, what are you trying to say about sex?

That George Michael was right when he said "Sex is natural, sex is good. Not everybody does it, but everybody should".

Speaking of... why is everything so overwhelmingly gay in your collections?

I've been accused of being a self-loathing heterosexual because I'm a total real girl drag queen. Gay men get me and I get them. They also employ me. I've been on the editorial staff of LA's largest gay mag Frontiers magazine for almost three years and was a regular on the now defunct queer network QTV as well as Sirius radio's Out Q. This art show is the straightest thing I've ever done. Honestly. 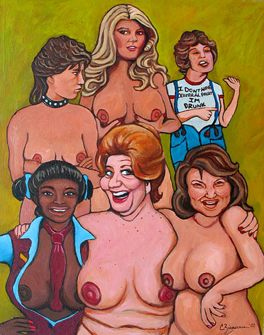 Where do you typically get the work that you show - and doesn't it tell you something that noone else in the world wants it?

First of all the Golden Gals Gone Wild show totally disputes what you just said. It was attended by nearly 2,000 people and 3/4 of the art has been sold. I've had numerous offers to buy the original piece that inspired the show so you couldn't be more wrong when you say nobody else wants it. I get my art from all of the place. I'm a big weirdo magnet. I seek some of it out but people usually find me.

What about the kids? What if they see Jesus replaced by chicken legs?

Chicken legs are not only delicious but they are tangible. You ever touch Jesus?

When we showed pics of the Golden Gals opening, some commentors on our site and on Digg were totally disgusted. Is your secret plan to make people hate sex or hate religion?

Since your collection is called "Merry Titmas" and because you proudly show off your pair, please tell us a little something about them, if you dare: how big are they, are they real, and do they attract the wrong people in your life or the right ones?

Sure. My boobs are 100% real. This is also the first and last time they will ever be photographed and displayed for the public so if you are one of the thousands of men who has screamed at me from the safety of your car this is your only chance to see them and more importantly purchase the beautiful print photographed by Austin Young.

I did the shoot partially because I would be a hypocrite if I curated a show about boobs and didn't show mine, but mostly because the event is to raise money for the Susan G. Komen foundation.

My breasts attract all kinds of attention but honestly they are the least interesting thing about me. My breasts don't write my columns for the magazine nor do they produce these events massive events that actually get people from NPR to the National Enquirer talking about art. But go ahead and gawk if you like.

As a matter of fact you can even get a better look as you hand me money when you purchase a piece, or two. 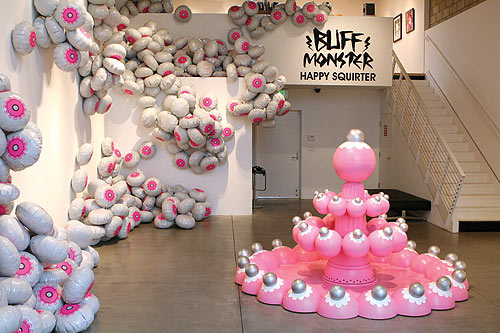 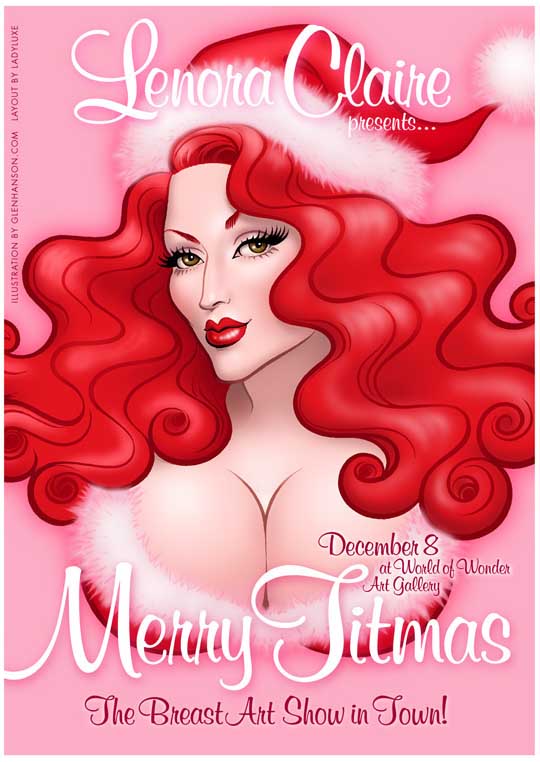 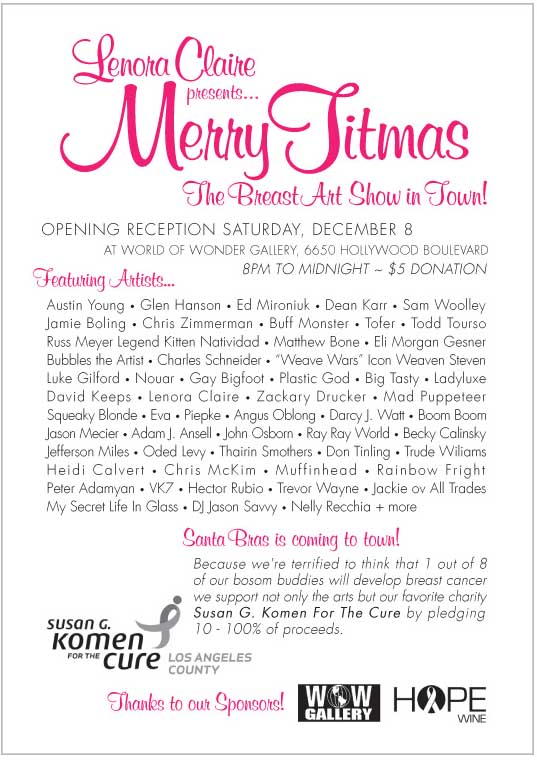