Driving down Sunset tonight we saw smoke billowing from what we feared was Safari Sam's. As we got closer we saw that it was not the rock club ablaze nor the 99 Cents store (thank God) but a car in the parking lot. All by itself. As if it had just spontaneously combusted.

Because we knew you'd like nothing better than to see a car fire in such an eerie situation we reached into the passenger seat for our trusty digital camera only to remember that we had not come prepared. We had simply gotten into the car to drive to the grocery store.

It was then that we remembered that we stored the $115 Flip Video digital video camera into the glove box for just this type of "emergency". So we parked in the nearby Shakey's (which was ironically advertising their new Firehouse Pizza on their marquee instead of listing the names of the kids throwing birthdays that day), walked toward the blazing heap, clicked the red button on the back of the little, light-weight, mostly plastic device, and shot the video above. 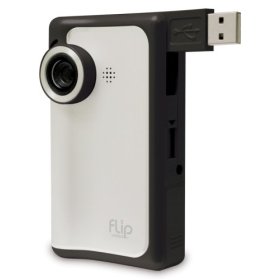 It's called the Flip Video because there's an USB plug that flips out of the camera when you want to upload the clips that you have shot, meaning there's wires to lose. The device uses two AA batteries. There's a play button, a delete button, and a navigation button, as well as a nice big red button that serves as the start recording/stop recording.

Simple, light, decent quality, small, Flip Video comes with intuitive software that makes it easy to deliver the videos up to YouTube.

We gotta say for a tad over $100 it's pretty damn brilliant and perfect for people who are either too dumb to figure out actual video cameras, or too rough on expensive equipment. You can sit on it, drop it, even toss it to your buddy and it will probably survive. And because it's so cheap if it gets stolen, big whoop.

There's a mini plug on the side so if you want to connect it to a VCR or a monitor, you can. There's a speaker next to the small lcd screen so you can hear if your audio is ok. And there's even a way to screw in a mini tripod onto the bottom of the camera in case you want to - well, video things hands-free, so to speak.

Perfect for kids of all ages, and adults who swear they don't need anything fancy. And completely ideal for bloggers on-the-run.

Any camera can do well outdoors in the sun. So here's another example of it doing its thing in low light, this time in a loud karaoke club. As you see, loud sounds sorta freaks it out, and there's some digital distortion at times. But again, enough that you can deal with it.

Full disclosure, the people behind Flip Video sent us this camera, but by now you know us well enough to know that if it sucked, we'd tell you, and this thing, for what it does, certainly doesn't suck.

Here's a $119 version on Amazon (that's slightly better than our review model), along with a few hundred customer reviews, most of which are just as glowing as this one.