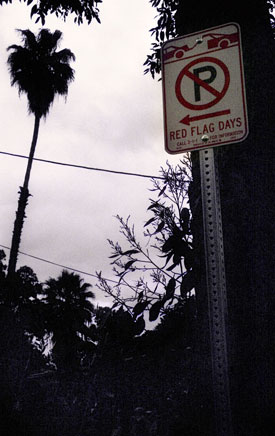 Today Pat Morrison explains that parking can be tough for people who live in the hills who have converted their garages into offices and spare rooms. Sure you can say, "awwww poor rich people, listen to the tiniest violin." But lots of people live and work in hilly areas of this town so hush.

The mountains and hills that make Los Angeles beautiful also create a bowl for smog, as well as gullies and canyons for vast watersheds — and a perfect playground for the wild hot winds. So when Malibu is a tinderbox, people who live in the hills 10, 20, 30 miles away find themselves under "red flag alert." Parking is banned on narrow hillside streets to allow fire trucks to pass. This means that uphill residents without garages have to park downhill, where streets widen, and either trudge or find a lift back up to their homes.

For downhill residents who don’t have garages either, this turns the canyons of Los Angeles into the canyons of New York. Parking — never easy — becomes a free-for-all. It’s compounded by the fact that so many residents have converted their two-car garages to gyms or offices or play-rooms, and they too park in the scarce spots on the street. During this Thanksgiving’s red flag alert, dozens of cars ordinarily parked on narrow, uphill streets got squeezed downhill. Someone parked a large, shiny black BMW — playing perfectly into every Bimmer cliche — in front of my stairs, and left it there all weekend. I practically had to clamber over the hood to get to my own steps. Thank goodness the piano wasn’t being delivered this weekend — getting the groceries past that mirror-bright paint job was tricky enough.

Read the whole thing, it's funny, as always, from LA's best-dressed columnist.