Raspberries Return to LA Next Week for Two Shows

by Tony Pierce in Arts & EntertainmentMiscellaneous on November 24, 2007 12:00 AM
Tweet

by Chuck Clayton for LAist

Toothpaste is good and so is orange juice, but it’s a goddamn tragedy every time you try to combine them. Like power-pop.

Seems like a no-brainer on paper, you know — mixing Beatles melodic values with bigger guitars and drums — but, in practice, power pop nearly never works. It’s usually whiny and wimpy and often flabby, too, all the wrong Paul McCartney moves played by, well, Beatle nerds who sing boringly about their ineptitude with the ladies.

And then there’s the Raspberries.

And since this is America, and the terrorists do not win, and the reunited Raspberries are playing a couple SoCal shows, what better time to be alive (except certainly the early ‘70s, when the Raspberries were first together) and to celebrate what is arguably the only fully actualized power-pop group in power-pop history?

Led by chief singer-songwriter Eric Carmen, the Raspberries busted out in 1972 with their Top 5 single, “Go All The Way,” a three-minute-something pop opera, all Beatles-y, Who-y, Beach Boys-y (Beach Boise?) and giddy and thrilled, and laughing and singing C’mon! C’mon!, so anxious to get to the chorus that the verses are literally 5 seconds long. Though the Beatles had only broken up two years earlier, the Raspberries treated the British Invasion as if had happened decades before, like classic groups to be referenced and riffed on, rather than the near-contemporaries they were. 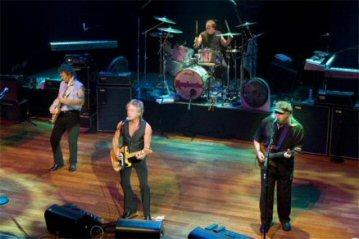 I always thought that Big Star and the Raspberries were kind of weird brothers, each taking similar but divergent paths in the new pop world vacated by the Beatles. While Big Star’s Alex Chilton and Chris Bell went in the wearing-their-art-on-their-sleeves, garage-acoustic, low-sucrose, critically acclaimed, White Album kind of direction, the Raspberries did just the opposite Beatles moves: They wore matching suits, aimed their singles squarely and unapologetically at the Top 40, and for it received critical disregard. They seemed happy to be on the cover of Tiger Beat and were musically and lyrically lusty and enthusiastic, pretty much exclusively singing about sex and pop music and lost love in the most grand-standing, over-the-top ways they could muster, all without the tongue-in-cheek cheap trickery of, say, Cheap Trick.

The Raspberries put out four albums, all of them good, none of them as good as their greatest hits — but then, they were that kind of band. They never hit the Top 10 again after “Go All The Way,” though how that’s possible is a pop mystery. The Raspberries have at least 10 songs that should’ve, including “I Wanna Be With You,” “Ecstasy,” “Tonight” and “Let’s Pretend.” Their final Top 40 single, 1974’s “Overnight Sensation (Hit Record),” is a masterpiece of ironic self-awareness and guileless sincerity about the ability of pop to save one’s soul.

The Raspberries broke up in 1974 and Carmen went on to have a shall-we-say erratic solo career with high points like ‘75’s classic “All By Myself” and then more questionable hits like Dirty Dancing’s “Hungry Eyes.”

In 2004 the Raspberries reunited after 30 years, and continue to have mini-tours. I typically avoid these kinds of reunion jobs, but for some reason I can’t resist a chance at a glimpse of a true American original — based almost entirely on other bands’ British music — and that is power-pop: toothpaste and orange juice, as I believe Paul McCartney once said, living together in perfect harmony.

The Raspberries
The Grove of Anaheim
Wednesday, November 28. Tickets are $35