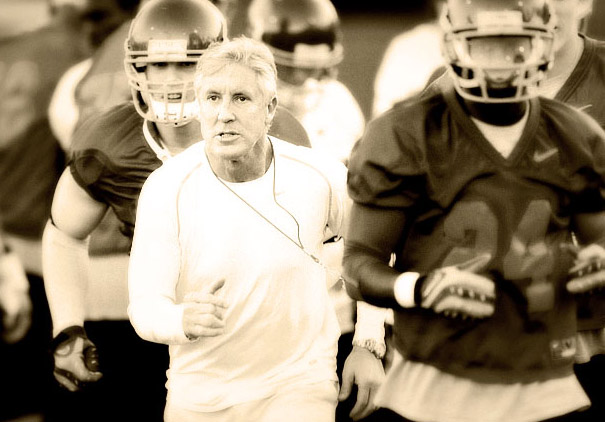 One of the things that sports fans in Southern California should be grateful for as they warm up last night's left overs is the fact that ESPN.com's Eric Neel moved to LA this year from Northern Cal because now his excellent writing is being more focused on our teams.

Yesterday he posted a glowing feature on the USC football head coach who appears every bit the Golden Boy that he looks in photos. In the piece Carroll smiles at hoots from the USC women's waterpolo team, signs autographs everywhere he goes, and has no fear singing along aloud to classic rock hits. But we liked that he is a man who doesn't live in the past and has no problem dropping f-bombs. He is a football coach, after all, not a choir master.

There are seven Heismans and a BCS championship trophy under glass in the lobby of Heritage Hall, the building that houses the USC football offices. Outside Carroll's office a display case holds the 2003 AP national championship trophy and the Orange Bowl trophy from 2002. The Trojans have won 11 national titles; the place is dripping with history, loaded with glory. In his office one September night, after practice and before the evening meetings, Carroll is trained on an early draft of a play-calling script that Sarkisian and his staff have put together. Tonight's homework, film of the week's opponent, is frozen on the computer screen behind his desk. "I love trophies, but f—- 'em. They're for old men, for guys living in memory," he says. "I'm talking about: Are we competing today, every minute, in everything we do in practice. Are we letting loose and daring to be great here and now? And can we sustain that? And repeat it. Trophies are great, but we're trying to win forever."

We're eating ice cream in an ad hoc dining room on the second floor of the downtown Los Angeles Marriott, where the team stays on the day before home games. We're talking about what Carroll didn't know when he was with the Patriots in 1997-99, what he has learned since, about finding and refining a philosophy. I'm still eating, but he's done and he pushes back from his bowl, puts his hands behind his head, fingers laced, and looks at me. "At some point — maybe after your parents have died and you're not trying to please them anymore — at some point you have to decide what truly matters to you and what you believe in. And then you have to have the balls to commit to it."

Commitment being talked about regarding sports in LA? What is this the 1970s? Anyways, read the whole thing, especially if you're a Trojan.