John Edwards at the Writers Srike 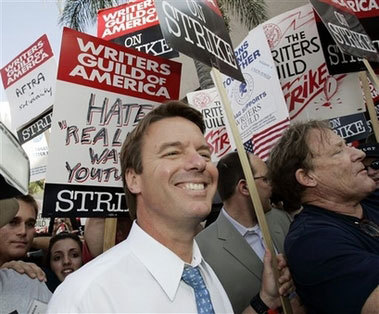 John Edwards is everywhere in LA this weekend. Today, at the Presidential Forum on Global Warming and yesterday, images are pouring in all over these internets of Edwards in Burbank at the WGA Strikes.

Best photo caption goes to Variety's Strike Blog, Scribe Vibe, for this picture of Edwards screaming into a bullhorn: "John Edwards was campaign shoutin' like a Southern Democrat out there on Alameda Avenue."

A statement released by John Edwards on November 8 was only the harbinger of what eventually happened in Burbank yesterday: “The striking Writers Guild members are fighting an important battle to protect their creative rights. These writers deserve to be compensated fairly for their work, and I commend their courage in standing up to big media conglomerates. As someone who has walked picket lines with workers all across America and as a strong believer in collective bargaining, I hope that both sides are able to quickly reach a just settlement.”

Last night, Patric M. Verrone, President of the WGAW, announced that they will resume negotiations on Monday, November 26.

After the jump Edwards rolling up the sleeves and denouncing big biz while saying that unions are the only way to beat corporate greed...